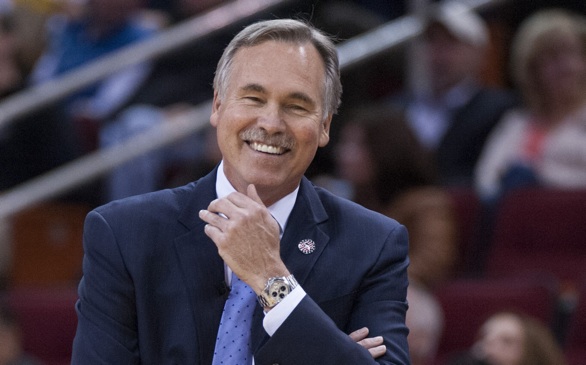 Lakers Coach Mike D'Antoni downplayed Kobe Bryant's activity level in Saturday's practice, saying it was too early to tie it to an official return from a torn Achilles' tendon.

Bryant had been sidelined since mid-April but returned to the practice court for some drills Saturday and light shooting Sunday.

“I know we're all excited, everybody's excited, and I'm sure he's excited, but [it's] a little bit premature right now,” D'Antoni said Sunday. “You're dealing with, ‘Is he sore today? Is there a setback tomorrow?' That's the first step and there's a lot of steps to be taken, so I just think we need to be cautious. We just better be cool and chill out a little bit.”

Saturday's practice was closed to reporters, but Bryant “surprised most people” and did some jumping but no dunking, D'Antoni said.

“Two 360s and threw the ball off the side of the wall and dunked one time,” D'Antoni joked.

The Lakers (5-7) have often struggled in late-game situations without Bryant. When he's healthy, there's no question who shoots in crunch time.

“He's a presence, no doubt, and we need that presence, especially at the end of games,” D'Antoni said. “But we've got games to win and there's going to be a bunch of them before he comes back. So we're going to have to do our business.”

The big question — what will Bryant look like when he returns?

“There will be some struggles early. There's no way that he comes back with everything,” D'Antoni said. “But at the same time, his 10% is better than most people.”

D'Antoni was optimistic that Bryant would eventually be fine. He averaged 27.3 points, six assists and 5.6 rebounds last season.

“He'll be what he is. He'll drive and he'll do what he does and he'll post up and he posts up great, so obviously we'll do that," D'Antoni said. “We'll get him at all the spots he's good at.”

The Lakers have an unusually easy schedule coming up, with no games until Friday against Golden State.

The Lakers aren't just struggling with their health on the court.

Longtime television analyst Stu Lantz did not take part in Sunday's game coverage because of laryngitis stemming from a head cold. James Worthy took his place as TWC SportsNet's color commentator for the Lakers-Detroit game alongside play-by-play announcer Bill Macdonald.

Lantz is in his 27th season with the Lakers. The last time he missed a game was 2009, when he took some time off while his wife recovered from surgery.