Gavin DeGraw is Making His Move: The singer talks about his music’s new direction and co-writing. 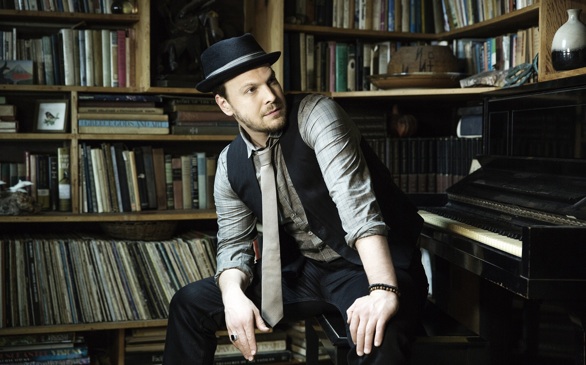 The singer-songwriter is getting ready to embark on tour.
(Credit: gavindegraw.com)

In his new album Make a Move, top-selling artist Gavin DeGraw makes a bold move and gives up control in the name of art.

On this album, which released on Oct. 15 via RCA, DeGraw takes his soul/folk/rock style to the next level by collaborating with other writers in an effort to bring forth an exploratory sound that away breaks from his signature singer-songwriter style.

“My last album was my first attempt at co-writing,” he said. “I had someone write a couple of songs with me, and I wrote the rest alone. All the albums prior to that I wrote alone.”

DeGraw admitted that sharing writing duties on Make a Move was a risky and bold choice. “There’s always a possibility of loosing your sound when collaborating with other artists, but what you want for yourself as an artist is to have a strong enough identity artistically that people will always be able to hear you,” he said.

Sharing his creative space with other writers pushed the hit maker to test his musical skills, allowing him to become vulnerable while embracing other artists’ perspectives of his work.

“It’s nice to open up those channels [of information and creativity]. The co-writing thing has really broadened my experience as an artist and as a writer. I feel more a part of a community than I ever have. I’m tapping into a group of people that do some of the similar things that I do,” said the artist who broke into mainstream music with his debut album Chariot a decade ago.

Listening to Make a Move, it’s clear DeGraw was craving a change in direction, and he seems unapologetic about the outcome.

“At the end of the day, it’s just art, and art is about experimentation,” said Degraw. “...hearing how others hear things...was one of the biggest things I looked forward to doing. That’s what makes this album interesting.“

According to the singer, Make a Move was about pushing the limits and facing what a lot of artists fear: letting others in and revamping his style.

“A song like ‘Leading Man’ that I wrote with Kevin Rudolf [Justin Timberlake, The Black Eyed Peas, Nelly Furtado] has this really cocky approach. It's kind of over-confident, but I find it very entertaining,” said DeGraw.  “It’s not a song designed to be intimate; it doesn’t have the typical singer-songwriter perspective. I think 10 years ago, the category ‘singer-songwriter’ never would have accepted a song like that, but that’s precisely why I wanted to do it.“

“’Who’s Gonna Save Us,’ which I wrote with Busbee, reminds me of my first album a lot because there’s a certain innocence about the vocals and lyrics. At the same time, it’s also reminiscent of ‘Not Over You’ as far as the production elements. Ultimately for me, it sounded like ‘Not Over You’ on steroids,” DeGraw said with excitement.

He continued, “Having moments like that on this album, which are so crazy and stylistically opposed, is what keeps it interesting to me.“

However, Make a Move isn’t all about musical experimentation; it’s also about healing, acceptance and “making moves,” so to speak.

In 2011, DeGraw was hospitalized after being attacked in New York City. He suffered a broken nose, a concussion, fractures and lacerations to his face.

“I think every life experience can find its way into what you’re doing,” revealed DeGraw in a serious tone. “I’m not sure exactly how that experience shaped me as an artist, but I know it made its way into my music for sure.”

He continued, “When I think about the lyric like in ‘Leading Man’ that says: ‘All you suckers get the back of my hand,’ of course in the back of my mind I’m envisioning people like those douche bags who pick a fight with somebody by themselves, you know?”

Regardless of whether his fans or critics adore him or reject his latest effort, DeGraw is content with having created an album that is about collaborating, experimenting and utilizing painful experiences to push him forward.

“You can’t keep it in, but it’s my job as an artist to let it become part of my craft."

Gavin DeGraw will be performing at the City National Grove of Anaheim on April 29, 2014. His album Make a Move is currently available.

Interviews
Benny Blanco on his new song with Juice Wrld: 'It's hard to listen to now'
214 views

Interviews
Jewel reflects on her 1995 debut album, which sold 12 million copies and changed her life
542 views

Interviews
Shamir used to be an ‘accidental pop star.’ Now, the Philly indie rocker has come into his own.
372 views

Interviews
John Legend has released an album about love as the world convulses with anger.
475 views