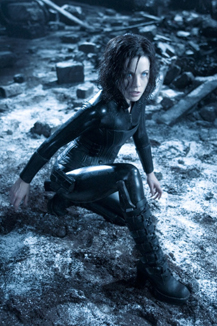 In a nondescript building in Burbank, Calif., a corpse with its head sliced in half reclines on a table. Overhead, a fleshy victim with mottled skin hangs upside down, forever suspended in mid-scream. Animal, human and other unidentifiable body parts litter the tables, rafters and staircase.

This nightmarish setting isn’t the depository for alien experiments, but the studio for Patrick Tatopoulos, the go-to creature/production designer for anything offbeat, twisted or downright terrifying. His latest endeavor is Underworld: Evolution, the follow-up to Len Wiseman’s 2003 fantasy thriller about a centuries-old vampire-werewolf feud.

While many onscreen vampires look typically human, they all share pointy teeth, all the better to suck blood with. Prosthetic dental technology has improved over the years to make speaking easier for actors such as Kate Beckinsale and Tony Curran, who play vampires Selene and Marcus.

"We did tons and tons of vampire teeth for this show," says shop supervisor/puppeteer Guy Himber. "These are a set of Kate’s. They actually hook in ... and lock into her teeth. Kate is a primary character, so we probably did about a half a dozen sets for her because to get the look really nice, they’re pretty delicate and thin in areas. They’re going to break down, and then you put in the new set."

As the title implies, the creatures seen in Underworld: Evolution aren’t necessarily your ancestor’s vampire or werewolf. Not only do both creatures result from a biological/scientific condition, meaning that they may change over time, but a handful of hybrids have arisen that combine both bloodlines. In the case of Marcus, a freak accident has infused him with unprecedented strength and large, bat-like wings springing from his body.

"Usually when you see [a vampire] with the vampire bat wings, the wings fold back and are usually bouncing around. I thought with this one we’d do something else," says Tatopoulos. "The wings fit into the recess on the back of his body. So when you fold back, it’s not overpowering to look at the guy. When they unfold to become wings, the membrane hasn’t become unfolded yet, so they become almost like two extra arms to fight, grab things. So the wings actually have three positions: inside the body, opening up like spider legs and then becoming real wings."

On the other side of the creature conflict are the werewolves, called lycans. Lycans are designed to be neither wholly wolf nor man. They crouch on all fours, can run on two feet and have a short muzzle, more like a cat than a canine.

And while werewolves are known for their agility and speed, one of Tatopoulos Studios’ recent creations allows the werewolves to stand still. In the first film, these larger-than-life monsters called for leg extensions, carbon fiber prosthetics that encased the lower leg and raised the performer off the ground. Unfortunately, like Chinese stilts, which have a narrow base, these older extensions kept actors in constant motion to keep their balance.

"On the first ‘Underworld,’ we worked with a much smaller ‘pawprint,’" says Himber. "One of the changes here is that we allowed it to open up a little bit and modify the bottom of the foot. Stopping or standing still from a run-in, doing a performance and walking out without looking teeter-y – that’s what these new extensions have been all about."

Brian Steele, who plays William, the film’s first historical werewolf, demonstrates the invention. He enters the studio wearing black bike shorts, a vest and the extensions and then proceeds to swing his werewolf head at the gathered journalists in a menacing, stalking manner.

"The idea is to design an extension that: One, we can pull in and do a close-up with. I can be steady and do all these movements," explains Steele. "Another thing is that we can walk upright but we can also get down, do the turning movements, all the aggressive stuff. We can back up from a prey. We can do a lot of stuff without wires. We can step up on stuff if we had to. So it gives us a lot of movement. These are definitely the Rolls Royce of extensions."

Even with these newfangled toys, playing a werewolf isn’t easy after hours of prep work, the heavy overall suit and no bathroom breaks. And while Steele is a professional creature performer with endless endurance, many of the film’s actors are unused to the physical challenges and had to struggle to perform underneath their various costumes.

"Tony Curran, [Scott] Speedman, Bill Nighy, all these guys have been through full-coverage makeup, many hours to get them in, many hours to get them out, performing," says Himber. "The guys I think take some of the discomfort of that makeup and use that in their performance. They take whatever horrible energy that it generates and were able to use it in some way. You can see the transition, when they go from [being] normal guys to their full, made-up, prosthetic characters. They turn into some badasses."

Underworld: Evolution is currently in theatres.
Article posted on 1/23/2006
This article has been viewed 2593 times.