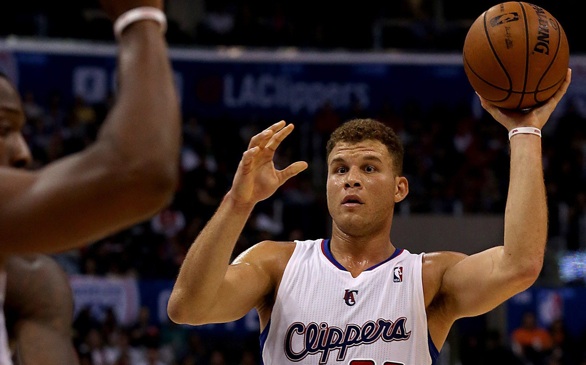 Clippers Coach Doc Rivers said he has reminded himself that Blake Griffin is only 24 years old and that the three-year veteran's game still is evolving.

In Rivers' eyes, Griffin will only continue to get better as a player.

"I'm on him pretty hard," Rivers said. "I ask a lot out of him… I just think he's going to keep getting better and better."

Before the Clippers played the Memphis Grizzlies on Monday night at Staples Center, Griffin was averaging 22.9 points a game, first on the team. He was second in rebounds (10.9) and assists (3.3).

Clippers backup big man Byron Mullens has struggled this season with his game.

But Rivers said he has seen some improvements from Mullens, who is shooting 43.8% from the field and averaging 3.8 points in 9.3 minutes a game.

"It's just a process for him," Rivers said. "It's growth. I think he's starting to understand what's a good shot and what's not for the most part. I'm more concerned for him to hang in there defensively and do some things for us and he's starting to do that."

Mullens has a tendency to rely mostly on his jump shot, especially the three-pointer. He was five for 19 (26.3%) from three-point range before Monday night's game.

Rivers said Mullens should be down low more than he has been.

In fact, Rivers said Mullens has shown in practice that he does have a low-post game.

"Obviously it's easier to shoot a jump shot," Rivers said. "But his post game is something he can lean on far more than he does."

The Clippers have been a team that has played in spurts, especially defensively.

Even Rivers acknowledged that.

So with that being the case, Rivers was asked whether he has the type of team that tries to push the on and off button during the game.

"I don't think we have the on button yet," Rivers said. "We're still learning. We're still getting better. I'm still getting used to them. We're getting used to different stuff. I just think we lose ourselves sometimes in the game. Other than the Brooklyn game [Saturday] night, I don't think we have that on and off button yet. And it's a good button to have, though, I can tell you that. When you can push it, that's really nice."