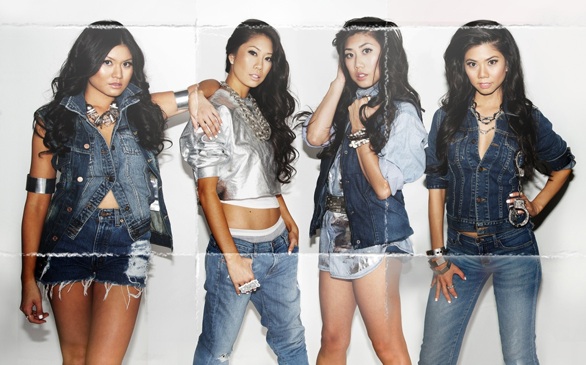 The Jazmin Sisters are four Chinese-American sisters with a R&B vibe.
(Credit: Courtesy of Big Hassle)

JAZMIN SISTERS GIVE BIRTH TO ’90S BABY
They were finalists on “America’s Got Talent,” have racked-up close to a million YouTube views with their cover of the Jackson 5’s “Who’s Lovin’ You” and have gotten raves from singers Eve and Michelle Williams. Now, sisters Nadia, Felicia, Celia and Daria Khong, known professionally as the Jazmin Sisters, are ready to conquer the rest of the world with their just-released EP, ’90s Baby. The Los Angeles-based foursome teamed with GRAMMY Award-winning producers MIDI Mafia (50 Cent, Frank Ocean) to craft tunes such as the sunshine-and-parties celebrating “Cali Girls” and the Motown-flavored “Laid Back.” Felicia said, “When we began working with MIDI we were able to be ourselves for the first time in music. They shared our love for hip-hop and Motown so ’90s Baby is a dream come true.” Hear the new music at www.jazminsisters.tumblr.com.

NIGHTMARE AND THE CAT
Brothers Django and Samuel Stewart, the principal members of Los Angeles band Nightmare and the Cat, are rock royalty of sorts; they’re the offspring of uber producer and former Eurythmics member Dave Stewart and Siobhan Fahey of Bananarama, the British all-girl band that had hits in the ’80s with tunes like “Cruel Summer” and “Venus.” The siblings are more likely, though, to cite David Bowie, Radiohead and the Beatles as sources of inspiration. You needn’t listen any further than “Simple,” the title track of the band’s upcoming album, to hear those influences at work. You also needn’t wait until that album drops next year to get a good dose of Nightmare and the Cat either; a five-song sampler, also titled Simple, is available now from Capitol Records.

SASQUATCH ON THE LOOSE IN L.A.!
Okay, calm down; unlike Elvis, Bigfoot has not been spotted walking down Hollywood Boulevard. The monstrous entity we’re referring to is the L.A.-based stoner rock trio Sasquatch, who has recently released its fourth album, cleverly titled IV.  Influenced by late ’60s and early ’70s metal, rock and psychedelia, the band’s music has been described as a mash-up of Black Sabbath, older Soundgarden, Corrosion of Conformity and classic rock band Mountain. That translates to mean that Sasquatch plays it heavy. Track them down at sasquatchrock.us.

DEADMAU5: WE ARE FRIENDS VOL. 2
Electronic music producer deadmau5 has just released the inaugural effort on his Astralwerks-distributed mau5trap label, a compilation called We Are Friends Vol. 2 that perhaps gives hints as to what artists might appear on the label in the future. Contributing to the sampler are Kairo Kingdom, James Njie, Eekkoo, Aron H, Heat Maxwell, Al Bizzare and deadmau5 himself, representing with the tracks “Your Ad Here” and first single “Suckfest9001.” “Super Breakfast” by BSOD, the collaboration between deadmau5 and Steve Duda, is also included.

GYPTIAN: SEX, LOVE & REGGAE
VP Records continues to release the hottest reggae and dancehall records on the planet, and they’re poised to have their biggest release ever in the new one from Gyptian, Sex, Love & Reggae. The sensual singer who has been racking up awards like crazy and building a massive fan base said, “This is the Gyptian album that I want people to hear. Each album that I do advances my career, but this one is Gyptian – the next level.” Helping to take Gyptian to new heights on the set of dancehall, soca, R&B and global pop songs are Estelle, Melanie Fiona, GRAMMY Award-winning singer Angela Hunte and soca stars Bunji Garlin and Kes the Band. The album finds Gyptian covering the big Cyndi Lauper hit “True Colors” and soulful reggae man Gregory Isaacs’ “My Number One.” However, much of the record is original material written or co-written by producer Jerry “Wonda” Duplessis, famed for his hit making with Miguel, Lupe Fiasco, the Fugees and Mary J. Blige.

BEAR GRILLZ: THE HIGH GRADE EP
Not to be confused with adventurer Bear Grylls, here’s what you need to know about the latest artist to record for dub step producer Datsik’s Firepower Records: Bear Grillz is a grizzly bear from Yosemite National Park that spends a typical afternoon growling at marmots and eating tourists. While trying to digest one particularly tricky mountain climber, he discovered amongst the hiker’s possessions something called a “MacBook Pro.” Fast-forward nine months, endless YouTube tutorials and a duck later and the four-track The High Grade EP is now ready to be heard. Find out if the music is as interesting as the back-story at  soundcloud.com/istbeargrillz.