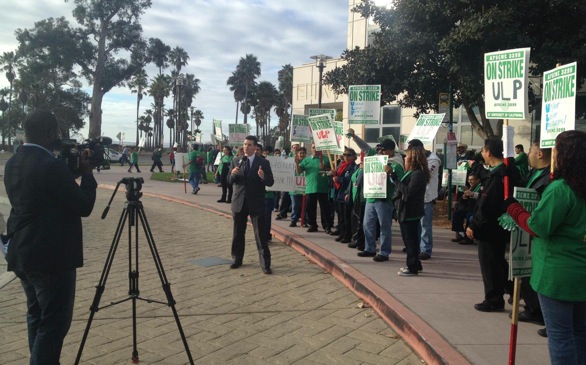 The media reporting on the UC strike at UC Santa Barbara.
(Credit: Facebook.com/Afscme3299)

Wednesday morning marked the beginning of a one-day strike at the University of California (UC) campuses and five UC medical centers throughout the state.

Hospital workers, custodians, service workers, student tutors and even graduate students are among those participating in the strike, picketing at nine UC campuses, including the University of California, Los Angeles. They plan to picket until 7 p.m. Wednesday.

Representing 22,000 UC employees (at the colleges and at the medical centers), the American Federation of State, County and Municipal Employees 3299 (AFSCME) union organized the strike in response to alleged intimidation tactics used against union workers during a two-day walkout in May. The union's leaders also argue UC administrators are trying to implement unfair labor practices and low staffing levels.