USC Undefeated at Home But Struggling to Win Over Fans 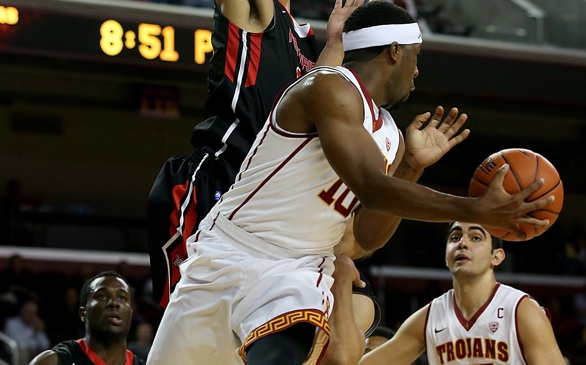 USC finally figured out how to get fans back in the seats for football games. Now, the Trojans need to do the same for basketball.

The Trojans aren’t the dunk-city type team that earned USC coach Andy Enfield national notoriety at Florida Gulf Coast. Perhaps when he gets his kind of recruits here, that will be the case.

For now, USC’s undefeated home streak against another Big West team wasn’t a big enough sell. USC remained unbeaten at home as it defeated Cal State Fullerton, 76-62, on Tuesday at the Galen Center.

Guard Byron Wesley had a team-high 22 points for USC (3-1) and center Omar Oraby finished with 15 points on 4-of-5 shooting.

Those attendance statistics are another matter. USC announced the attendance at 3,152, which is less than the 4,000-plus Enfield used to attract at FGCU.

“Attendance, I understand that during the week in Los Angeles is difficult with the traffic situation,” Enfield said. “Also, it’s an out of conference schedule. I’m sure if we had a Pac-12 team in here we’d have better attendance.

“We also have to prove ourselves. We have to prove we’re a team people want to come see. I hope they see we’re playing extremely hard. We’ve won three straight games. We’d love more student support and more support from the community, but I think that will come.”

Guard J.T. Terrell, the team’s leading scorer last year, didn’t play because of “academic reasons” but sat on the bench. He’s practicing with the team as well but his immediate future is unclear.

“Tonight he was (eligible),” Enfield said. “We’ll make some decisions in the next couple of days about his short-term eligibility or standing with the team.”

The game wasn’t a big draw for fans, even though they could bring two canned food items (to be donated to charity) for two free tickets.

Maybe the only way to get fans through the door is if interim football coach Ed Orgeron sits in the student section.

Perhaps students were at the George W. Bush talk on campus that resulted in tightened security in the area.

Cal State Fullerton closed to within 58-47 midway through the second half. The Titans went on a 14-0 run but USC pulled away.

Oraby nearly had a triple double as he had nine rebounds and six blocked shots. He was 7 of 10 from the free-throw line.

USC got 11 players in the game in the first half. Oraby made his first field goal of the second half — on an alley-oop dunk — with about three minutes left in the game.

Wesley, who was 7 of 14 from the field, quietly has gone about his business. He’s not as noticeable as 7-foot-2 Oraby, but Enfield doesn’t think he’s quiet at all.