The Deflowering of Eva Van End 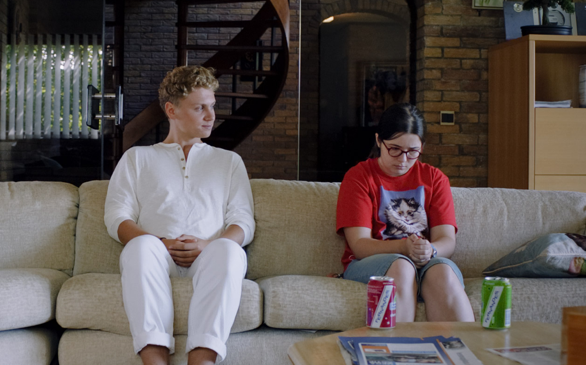 Maybe it’s like a train wreck we can’t tear our gossip-hungry eyes away from; perhaps it’s the familiarity that we can all too closely sympathize with; or maybe it’s just the terrifying notion that one day we could all become part of one of these dysfunctional suburban families that teeters on the brink of spontaneous combustion.

Whatever the reason, the curiously addicting genre of suburbia gone wrong seems to be vast and endless, and Dutch director Michiel ten Horn’s latest flick, The Deflowering of Eva Van End, is a fresh and welcome addition to the family.

Premiering at the 2012 Toronto International Film Festival, ten Horn’s darkly charming film highlights what happens to the van End family when a German exchange student, Veit (Rafael Gareisen), comes to live in their home for two weeks. Veit, however, is no ordinary teenage boy. He’s an angelic, philanthropic, all-too perfect Adonis that is about to change everything about their sad little lives.

The Van End’s, you see, are a typical middle-class suburban family: in denial about their tangible unhappiness. While Eva (Vivian Dierickx), the youngest and most invisible child, twiddles her fingers at the end of the dining room table, her parents, Evert and Etty, squabble about their upcoming and unwanted silver wedding. Then, the eldest son Erwin chimes in about his “exciting” promotion to floor manager of Home Depot. Manuel, the destined burnout of a son with supreme mommy issues, then stumbles in, late, red-eyed and sporting an audacious new jacket that has no business being on his body. Eva might as well not exist, for her two older brothers and her parents are lost in the tangled mess of their own menial lives.

And this is what Veit does—he makes each of the Van Ends realize that maybe their lives aren’t so menial after all. With just a cool word and a dashing smile, Veit opens their eyes to something deep within themselves that they had no idea existed…however, no one ever said self-discovery was easy.

A series of catastrophes ensue, both darkly hilarious and hilariously dark. “You’re so much more than your bad skin,” was all Erwin needed to have seductively whispered into his ear to start questioning his own sexuality and research every possible way, including lotioning semen onto his face, to cure his horrid acne. Eva’s father Evert is convinced that giving all his money to an African child he met on Skype is exactly the right thing to do. The list goes on.

Akin to Little Miss Sunshine (2006), ten Horn then steers this quirky comedy down some dark alleys, revealing tragedy and loss in the van End’s past that makes all their eccentricities make all too much sense.

While Eva may be the titular character, she is by far the quietest and most understated—yet, she may also be the most engaging. With looks that remind you how thankful you are not to be a prepubescent girl and self-confidence coasting on empty, Eva has no authority over her own life; she merely rides in the wake of everybody else’s. For her, Veit represents her sexual awakening. And from the title, we know there is going to be some deflowering going on, but the who, when and where of it becomes part of the game. What becomes rather satisfying is the eventual unimportance of Veit, as Eva and her family are left with his mind games to self-destruct and ultimately rebuild each other once again.

The combination of both eye-popping and somber production design, as well as the zany, Napoleon Dynamite-esque score by Djurre de Haan, Deflowering finds itself complex, yet utterly familiar. Written by Anne Barnhoorn, some of the darker turns may alienate a viewer or two, but the quasi-satirical portrayal of a crumbling familial unit is sure to make more than a few nod in solidarity.

It’s likely that some may steer clear of suburban angst films for fear of hitting too close to home. But there is a beauty to the decay, to the reconstruction, to the unpredictable nature of each family. The Van Ends want you to watch theirs. And you should.