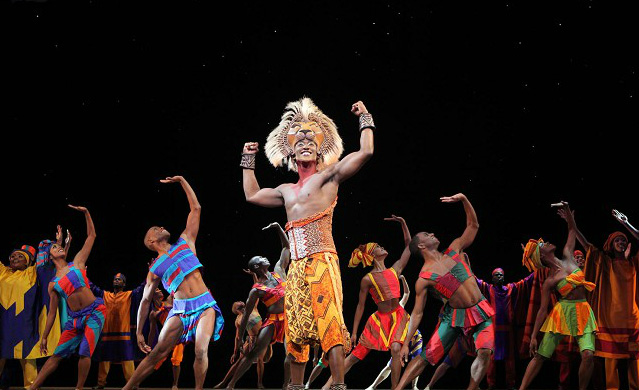 In many ways, the Hollywood Pantages' “The Lion King” differs from the beloved 1994 classic.

The talented cast sings and dances to Elton John and Tim Rice’s memorable music, but “Hakuna Matata,” “In the Jungle” and “Can You Feel the Love Tonight?” somehow sound different than what any '90s kid remembers from the movie.

That nostalgia may be the reason why the stage production doesn’t deliver the same pang when Mufasa dies, nor when Simba climbs Pride Rock to finally become king. The soundtrack, the lyrics of which are forever embedded into many, is changed slightly--either cut short (“In the Jungle”) or less powerful (“Can You Feel the Love Tonight?”).

The costumes and props are strikingly impressive and elaborate. Actors don animal head pieces and bright colors of green, red, yellow, blue and more. The stage morphs artfully with every change of setting, and the cast did a wonderful job, most notably Patrick R. Brown, who plays the saucy and sardonic Scar, and Nathaniel Logan McIntyre, as the young and mischievous Simba.

Indeed, from the stage crew and costume makers to the cast, human talent is this theater production’s king. As in the movie, with its now “retro” animation, the simplistic but affecting story takes the stage and breaks your heart. Seeing “The Lion King” at the Pantages, you may get teary-eyed for how brilliant the crew is, but not because a young cub has such a sassy beast for an uncle.

The love was still felt by the audience for Friday’s opening performance--they gave it a standing ovation. The script’s updated humor--“I think you already bucked up a lot,” says Zazu to Scar, who wanted to rethink and “buck up” his life--kept the two hours and 30 minutes alive and bubbly. The core of the narrative remains (although the added storyline of Scar pursuing Nala is unnecessary).

Going strong in its 17th year, “The Lion King” is worth seeing. Just don’t expect the same mighty jungle.