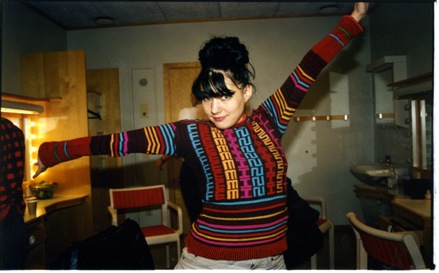 When punk singer Kathleen Hanna dropped out of music in 2005, the world, including her own bandmates, assumed that the artist had nothing new to say. The sudden retirement was a surprising one from the outspoken feminist performer, who spent years openly protesting against sexual abuse and inequality within punk rock.

However, in Sini Anderson’s documentary, titled The Punk Singer, Hanna reveals that it was all a lie.

In The Punk Singer, we are reintroduced to Hanna. She was not the girl next door, but rather the rebel soaring out of Olympia, Wash. who became a superhero for young women struggling to carve out their identities beyond school campuses. Hanna lived with a verbally abusive father and helped create the manifesto that would ultimately become Revolution Girl Style Now!

With beautifully captivating vintage footage, rare performance clips and a slew of interviews from Kim Gordon, Joan Jett and even Hanna’s husband, Beastie Boy Adam Horovitz, this loving tribute both wildly excites and entertains from beginning to end.

The documentary prominently displays the many obstacles Hanna successfully overcame, including being mistreated by the media for working as a stripper to get by in college, as well as being misunderstood for wanting to create a dialogue about the importance of feminism for women.

Towards the end, we find out why Hanna stopped performing. Secretly, the now 45-year-old was privately suffering from late-stage Lyme disease, an infectious disease caused by bacteria which, if left undiagnosed for too long, can impact numerous parts of the body, including the brain, nerves and heart.

“I lied when I said I was done,” revealed Hanna. “I just didn’t want to have to face the fact that I was really sick. I was told by my body that I had to stop.”

It’s a shocking revelation from the woman who helped delivered the ‘90s Riot Grrrl movement, bringing “girls to the front” at testosterone-fueled concerts where they were frequently assaulted in bruising mosh pits. In skimpy, tattered outfits with the word “slut” scrawled on her bare midriff, Hanna howled back at the men who attempted to quiet her down. Female audiences not only listened, but they were also willing to expose their own turbulent experiences.

The Punk Singer expertly shows how a woman’s passion for performing continues to be the driving force behind overcoming daily struggles, inspiring women everywhere, veteran listeners and new fans alike to unite and do the same. Perhaps this is why we couldn’t be more thankful for Hanna’s determination to continue speaking her mind.

The Punk Singer releases in Los Angeles on Friday, Nov. 29, 2013 at the Cinefamily. It will also be opening at the IFC Center in New York. The documentary will also be available nationwide on IFC Films' video-on-demand platform.

Buy tickets to see it at the Cinefamily here.

Buy tickets to see it at the IFC Center here.