Beauty and the Geek 2: Reality TV Bites Our Own Josh Herman 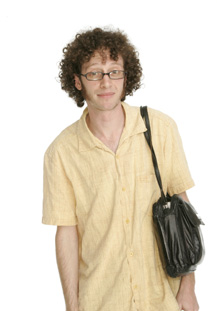 As a frequent contributor to Campus Circle, one would assume I’d have no problem picking up ladies. One would be mistaken. While cocking my head towards a stack of water-soaked newsprint while waiting in line at the New Beverly with a, "I write for them," has gotten me a few raised tweaked-eyebrows, it has yet to result in any verifiable "hooking up."

Figuring that eventually everyone in America would be on a reality show, I chose to take my sabbatical in October and became a contestant on the social experiment "Beauty and the Geek 2."

I was not the beauty.

Currently airing on the WB Thursdays at 9 p.m. following "Smallville" (Watch Superman then watch a bunch of Clark Kents without any super-powers), "Beauty and the Geek" pairs eight "brilliant but socially challenged men" with eight beautiful but-in-need-of-a-mental-makeover women. Each mismatched pair undergoes a series of challenges to determine who, ultimately, has created the perfect homeostasis of beauty and geek. "Beaugeek" as I liked to call it. (I was the only one.)

Though unable to reveal anything from upcoming episodes, I’d like to take this opportunity to offer advice – some personal, some observed – that I experienced while a contestant. These musings are intended for geeks interested in pursuing beauties, beauties interested in pursuing geeks, and everyone who will eventually be on a reality show.

(And P.S. The title the show places under my name: Museum Critic? That would be the "Exhibitions" column in Campus Circle, a feature I don’t mind bragging I created.)

If you are a Geek interested in picking up women, get a hot tub and surround it with alcohol. If reality shows have taught us nothing else (and they haven’t) it’s to throw alcohol at stagnant/boring situations. The beer-commercial mentality. I can only assume that the first producers of reality shows were ex-Frat Boys. Alcohol + hot tubs = sexual tension and hilarity. Unless you’re like me and don’t drink and are too ashamed to disrobe and enter a Jacuzzi.

For those who have seen the first episode of "Beauty and the Geek", take the advice my partner, Cher, gave me and refrain from wearing terry-cloth shirts on a hot summer day. In fact, refrain from wearing terry-cloth shirts on any day. (Though I did offer the use of my shirt as a towel for those who chose to take a dip in the hot tub.)

I can’t fathom why I’m one of the few males in Los Angeles that carries around a murse (man-purse; I thought of adding more syllables, but manuruse sounded even worse.) I can’t tell you how many times the Beauties had me dig in it for the Imodium, Pepto, Tylenol, Tums and air-sickness bag I carried with me at all times. Literally can’t tell you – I signed a contract.

No one (Danielle especially) likes to hear the word puke or vomit – instead, find cuter ways of discussing your abdominal problems, e.g., "Being around attractive women makes me swallow in reverse" or "My stomach’s about to revolt."

Another truism learned on the first episode: When a woman asks you stay the night in her room, she means in the actual room – not in the storage closet. However, should you find yourself amongst hangers, I recommend sleeping on Converse and/or Crocs; Manalo Blahnik stilettos are bad for the back and lower spine.

Togas were made for John Belushi … and maybe Caligula. They were not made for hairy and/or malnourished pale-skinned geeks.

While in a museum, refrain from using the pick-up line "that Lucian Freud painting’s not the only thing in here that’s well hung." Also, abstain from repeating the story of using this pick-up line over breakfast. The only thing worse than seeing the reaction of the woman I used it on at MOCA was Brittany’s face as I explained to her what it meant.

Do not read the message boards. These foul temptresses, these sirens of the internet, will entice you with their sweet song only to have you shipwreck on the crags of misspelled meanderings by a 12-year-old. Of course, I also cried at Babe: Pig in ihe City, so this may just be me. Seriously, even those posts that look like someone passed out drunk on their keyboard and hit send can induce ocular vomiting. You’ll be tempted to write back a series of expletives that the WB message board administrators will just delete anyway. (You can’t delete them all!)

I’m often asked why I chose to do the show in the first place, especially with my penchant for swallowing-in-reverse around attractive women. Before, during, and after the show I attempt to live by the adage: Don’t worry about failing, worry about the chances you miss by not trying. Living by this maxim guarantees you’ll only spend 2-3 hours ruminating about what you should have done differently during the day as you try and fall asleep at night instead of the usual 3-5 hours. Remember, nothing important was ever achieved without someone’s taking a chance.

Couching your insults in laughter doesn’t hide the fact that they’re still insults: e.g., chuckling while saying, "You’ll think this is funny – when I first met you girls I thought, ‘Wow. These women shouldn’t be wearing high heels without helmets!’" Whether or not they show Cher wrestling me to the ground remains to be seen.

Geeks are obsessive about Star Wars, "Adult Swim", "The Simpsons", Comic Books – and love. To all you good looking ladies out there who only date a certain type of (tall) men, I say: let them be talented, let them be tall, let them be handsome … and let them love you less.

Just because a stuffed-animal bear is cute on a bed does not mean its cuteness will translate if it’s stapled to a wall. (I swear, there was method to my madness. Watch Episode 3 where it’s hopefully explained.)

I personally go after girls who are the forbidden fruit. After being on "Geek," I’d say leave yourself open to any fruit – from pear to kiwi. Hell, even go after forbidden and non-forbidden vegetables. Again, remember that adage about not worrying about failing.

Beautiful women are just as anxious and neurotic about themselves as the geeks – they just have a nicer veneer to hide it behind. But break through that veneer, and you’ll often find your initial instinct was correct as they’re as vapid as a black hole. But sometimes you’ll be pleasantly surprised.

I’d usually say "Be Yourself," unless you’re a jerk or a Republican, in which case I’d recommend you try being someone else. No, actually most people can see through a false persona and the women on the show were quite adept at doing so; Really, what’s the purpose of selling out if no one’s buying?

Be the person you want to be, not the person people expect you to be. Unless you signed a contract telling the producers you’d be anyone they wanted you to be (Kidding, Ashton!).