Orgeron Yet to Meet with Haden About USC Job 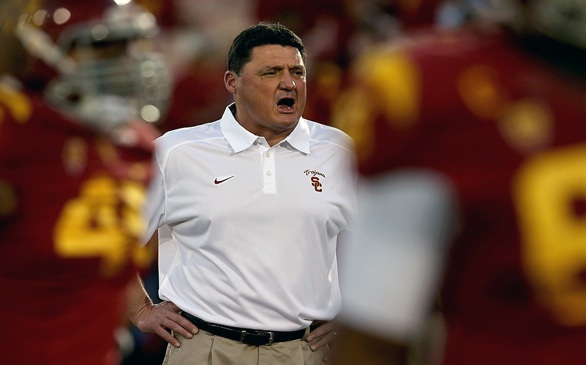 USC coach Ed Orgeron said Sunday night he has not spoken to athletic director Pat Haden yet and does not know when the pair will discuss the Trojans’ vacant coaching position.

The pair spoke briefly after the USC’s 35-14 loss to UCLA at the Coliseum on Saturday night.

Orgeron said Haden told him to “go ahead and recruit and do what he needs to do” as he continues to perform duties as USC’s interim coach.

“It was normal talk,” Orgeron said. “All our coaches except myself were out on the road recruiting today. We’ve been getting a very positive response. I’ve been on the phone myself.”

Haden said Orgeron would be considered for the job, although his chances probably decreased significantly after the Trojans lost to the Bruins.

Asked what USC’s biggest problems were against UCLA, Orgeron mentioned field position because of big kick returns by UCLA.

“We gave up too many yards and it put us behind the eight ball,” Orgeron said.

He also criticized the Trojans’ tackling and inability to down UCLA quarterback Brett Hundley.

Even though USC tailback Javorius Allen gained 123 yards, Orgeron said he was disappointed with the way the Trojans ran the ball.

“I also thought our run game would be a lot better,” Orgeron said. “We struggled early.”

“I’ll have preliminary talks with all of them,” Orgeron said. “And I’ll meet with their parents.”

Lee is expected to turn pro and be the Trojans’ top draft pick. Bailey is also believed to favor turning pro.

Offensive guard Aundrey Walker, who broke his ankle against UCLA, underwent surgery Sunday, Orgeron said. Center Marcus Martin was carted off the field with a knee injury, but Orgeron said he did not know Martin’s status. Linebacker Marquis Simmons left the Coliseum with his right arm in a sling.

USC is projected to play in the Las Vegas Bowl, but Orgeron said he did not want to speculate on the Trojans’ bowl plans. Orgeron was an assistant coach in 2001 when USC last played in the Vegas Bowl during Pete Carroll’s first season as coach.

“That was a long time ago,” Orgeron said.

USC’s likely opponent in the Vegas Bowl is Fresno State.

“There’s a lot of negative stuff out there ripping us, our effort, and our heart,” Kessler wrote. “If you want to say we didn’t play good then that’s fine, but don’t ever question our heart or say we don’t care.

“Don’t blame Coach O or any other coach either, if you feel the need to put the blame on someone, then put it on me. I’ll take the blame.”

Football
NFC preview: How the Eagles stack up against the rest of the conference
785 views

Football
Austin Proehl, hopes to join his father with a Super Bowl ring, helps out by playing role of Edelman
1,660 views