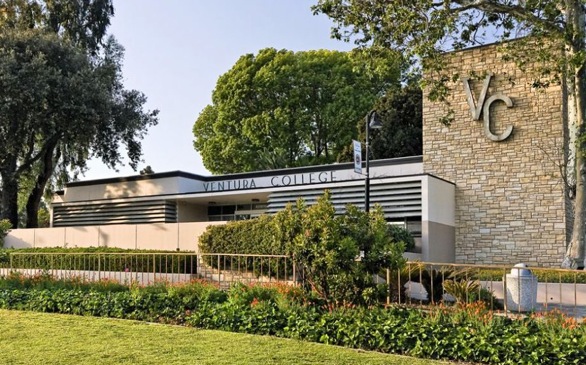 Janelle Calderón has the grades, test scores and extracurricular activities to get into a good four-year university. Instead, she’s leaning toward a community college close to home.

Ventura College would be less expensive, she said, and she wants to stay close to her parents.

“It would be economically beneficial for my parents if I went to VC,” said Calderón, 17, a senior at Foothill Technology High School in Ventura. “They have good jobs, but right now it’s more difficult.”

Calderón’s situation is not unusual, according to a USC study released this month. Latino students — even when they have the grades to get into a competitive school like the University of California — are more likely than their peers to attend a less-competitive community college. It’s called “undermatching.”

Overall, more than a third of Latino high school graduates went to community college in 2010, compared with roughly a quarter of white and Asian students.

Latinos make up about half of the state’s college-age population, so the trend could have a major impact on the state’s economy, said Estela Bensimon, one of the study’s authors and a professor of higher education at USC.

“It doesn’t affect just the Latino community,” Bensimon said. “It affects California. Their ability to earn a good income will affect the per-capita income of California.”

That’s not to say community colleges can’t be a good choice for students, Bensimon said. They just shouldn’t be the automatic choice.

“I’m not being critical of community colleges,” she said. “We just need Latino students to be better distributed across the ... spectrum.”

The trend persists even when Latinos attend a top-ranked high school, such as Foothill, putting them in a strong academic, college-going culture. Among students at those schools, nearly half of Latinos go to community college, compared with 27 percent of whites and 19 percent of Asians.

And it’s not just Latino students. Low-income students also tend to undermatch, according to another study, this one done by professors at Harvard and Stanford universities. They found that more than half of high-achieving, low-income students never even apply to a top university, even though they would probably get in.

Cindi Frederick, a counselor at

Rio Mesa High School in Oxnard, sees it every year at this time, as the deadline for college applications nears.

Molly Cook, 17, a senior at Rio Mesa, has been leaning toward community college even though her GPA is just above 4.0 — high enough to get into a top UC or private university. Like Calderón, she’s concerned about cost, especially because her parents, who are both deaf, won’t be paying for her education.

“I know if I wanted to, I could go to a university,” said Cook, who will be the first in her family to go to college. “I’m just worried about price. I keep hearing about colleges raising tuition, students taking on loans. I don’t hear much about full-ride scholarships.”

Later, when Frederick told Cook she could get her tuition covered at CSU Channel Islands in Camarillo, she decided to at least apply.

The economy and sometimes culture are the main factors, high school counselors say.

Cost is a big factor for Amanda Barroso, 17, another senior at Rio Mesa.

Latino or low-income students also may be more comfortable at a college that’s familiar and welcoming, said Steve Boyd, a counselor at Foothill. Even if they get a scholarship to a highly competitive school, they may feel out of place there, Boyd said.

“When my wife and I go to a restaurant, if we feel like we don’t belong there, if we don’t feel comfortable, we’ll leave,” he said.

High schools are trying to reverse the trend, but with counselors often responsible for 500 students each, it’s difficult, Frederick said.

Rio Mesa is pushing all students to meet admission requirements for the UC and California State University systems, she said. That way, they at least have the option of a four-year university when it’s time to apply.

The school also is working to ensure Latino students have equal access to the more-demanding Advanced Placement classes that give them an edge in getting into a university. They’re making the same push for the school’s International Baccalaureate program, which allows students to earn a high school degree recognized at universities statewide.

Because applying to college can be daunting, Rio Mesa and Foothill also hold workshops, walking students through the application process. They also hold financial aid workshops for parents.

“We have to do a lot of work because we have families who don’t necessarily know how to do that,” Frederick said.

And if students still say they’re going to community college? Boyd encourages them to at least apply to four-year universities. Then he has until March, when college acceptance letters start arriving, to let students and their families get used to the idea.

“That gives us a lot of time to work with mom and dad, for them to go up and walk around the campus,” Boyd said. “At the end, they still have the choice. ... My job is to make sure you have all the options.”

Calderón decided to apply to some four-year universities. She’s finished her application to CSU Channel Islands and she’s thinking about California Lutheran University in Thousand Oaks. But she’s still not sure.

“Sometimes I think VC would be better,” she said. “Then I think I want to go to a four-year (university). I’m really close to my parents, so that makes it hard.”

The College Board: “College Search Step-by-Step”

The College Board: “Financial Aid 101”