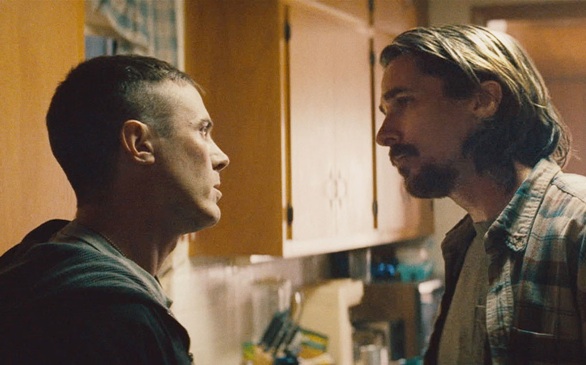 Affleck (left) and Bale (right) star as brothers in this film about the effects of war.
(Credit: Kerry Hayes © 2012 Relativity Media)

Out of the Furnace is fashioned with the same gritty realism that 1978’s Coming Home, 1989’s Born on the Fourth of July and 2009’s The Messengers portrayed. While violence is used as a shock factor in many movies, the realistic violent undertones that permeate Out of the Furnace mirror the everyday violence many of us are lucky not to experience.

The film centers on Russell Baze (Christian Bale) and his younger brother Rodney (Casey Affleck) who were born and raised in Braddock, Pa., a small town in the crumbling Rust Belt whose economy revolves around the local steel mill. Russell follows the family tradition of working in the mill, while Rodney enlists in the Army, hoping to find a better life outside of Braddock.

After four tours of duty in Iraq, Rodney returns to the recession-weary town that offers even fewer options than before he left. When a cruel twist of fate lands Russell in prison, Rodney tries to make ends meet by gambling and bare-knuckle boxing. Drowning in debt, he soon finds himself enmeshed with sociopath Harlan DeGroat (Woody Harrelson), the leader of a ruthless backwoods crime ring in New Jersey’s Ramapo Mountains.

The opening scene sets the tone for the film when the audience is introduced to Harlan and his sociopathic behavior right away.

“The entire picture is an examination of the nature of violence in a society in which men have to solve their own problems,” director and co-writer Scott Cooper explained. “We see that today in Syria, in Cairo, in South Los Angeles. We see it in Chicago and Detroit. I thought, if I’m going to examine violence in this way, then I should open the movie in a very naturalistically violent way, a way that I hadn’t seen in a film before.”

If you happened to watch Affleck on a recent episode of “Real Time with Bill Maher,” his passion for the plight of veterans is obvious.

“Many soldiers return from their deployment and have to start over,” said Affleck. “They have been trained to do a very specific job and entrusted with quite a bit of responsibility and power. Suddenly they are back home, and transitioning to civilian life is very challenging. The economy is in really rough shape. People don’t have jobs; some folks don’t have homes. [Rodney] is trying to find a way to get by day to day, pay the bills and restart his life.”

The movie begins in 2008, when many in the military had their tours of duty extended multiple times without their consent. “It’s a reflection of an unfortunate reality in America,” said co-producer Michael Ireland. “[Rodney’s] life is defined by his obligations to the military. He gets back home to find there had been a huge decline in the economy. So many young people have returned from military service to find there’s not much for them here. Rodney doesn’t really have anywhere to turn.”

Rodney channels his pent-up fury and depression into the informal and vicious boxing matches taking place in the area, participating in brutal bare-knuckle brawls on which large amounts of money are wagered. “The role had very specific physical demands that were challenging for me,” said Affleck. “I’m not and never have been a fighter. Training to find the right balance between getting in shape for the fights and dealing with the reality that he has been damaged physically from the war was arduous work.”

Though Harrelson’s character is much different than Affleck’s, their characters’ lives revolve around violence. Rodney has experienced the violence of war and now channels his anger (and possible PTSD) into the violence of boxing. Harlan (is a grown-up schoolyard bully who still uses violence to terrorize and control those around him.

When Harrelson first read the screenplay, he found nothing to like about the character—and that’s part of what he found so intriguing. “It is pretty dark material, and [Harlan] DeGroat is the most extreme character I’ve ever played,” said the actor. “Getting into character took a lot of imagination for me. I wrote journal entries from the character’s perspective to try to get into the mindset.”

The violent climactic scene is one of those “what would you do?” scenarios. If you had the opportunity to take revenge on someone who hurt your family, what would you do? Would you take the high road? Or would you surrender to your basic instincts? Those are questions that can never really be answered until you’re in that situation.

Bale explained, “…The film is about brotherly love, as well as love for where you’re brought up and what you have to do when you lose that. Russell’s plan for his life has been falling away bit by bit. He’s handled enormous responsibility within his family since he was very young. Now, he’s being forced to acknowledge what’s really important to him.”

Growing up, most of us are told that violence is never the answer. However, Out of the Furnace asks the profound question: what if violence is the only answer?