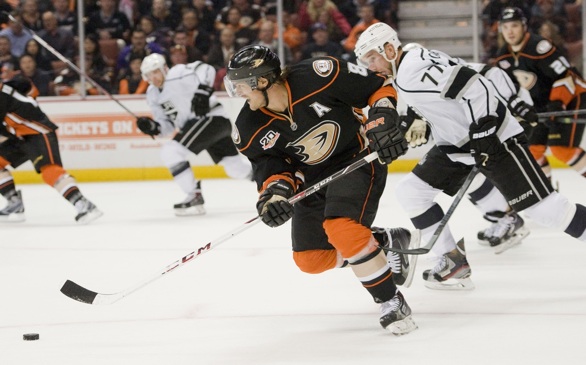 Tuesday night against the Anaheim Ducks, he made it unforgettable.

Jones did not allow the Ducks to score in nine shootout attempts, and watched teammate Dwight King end the marathon by beating Ducks’ goalie Jonas Hiller for the capper in the Kings’ 3-2 victory at Honda Center.

Jones was plugged in as the starter because Ben Scrivens, the backup to the injured Jonathan Quick, had played in 10 consecutive games.

“He just played deep in his net, wouldn’t let you deke and made some good saves.”

After stopping 26 of 28 shots in regulation, Jones said he approached the shootout with a clear mind, saying there was “not too much” running through his mind as the pressure multiplied with each round.

“I’ve been in that situation before,” Jones said. “The shooters are a little bit higher level. I just wanted to stick with what I’ve been doing and what I’ve been working on, and I was able to make a couple saves there.”

King’s winner went to Hiller’s right, slipping between his glove and pad after he had stopped eight straight Kings’ shots and 49 of 51 before the bonus session.

“A lot of guys shot gloves, some guys hit irons ... my weapon going down was to surprise him with a quick shot,” King said.

“Tough to lose that way,” Hiller said. “All you can do is make as many saves as you can, and hope the guys up front score at some point.”

The Ducks (18-7-5) took a 2-1 lead 2:14 into the third when Corey Perry, on a power play set up by Slava Voynov’s holding, saw a Cam Fowler shot trickle to him, allowing him to deke Jones, then slipping a backhand over the goalie’s sprawled right leg.

The Kings (18-7-4) responded less than four minutes later when Dustin Brown bashed a shot off a face-off through Hiller’s glove. It was Brown’s second goal in the last 14 games.

Both teams failed to convert power plays in overtime, in which the Ducks briefly had a two-man advantage.

“We definitely had chances,” Hiller said. “Too bad we couldn’t take advantage of it.”

The teams exchanged goals in a 46-second span of the second period.

Not only did the Ducks fail to get a shot on goal for more than seven minutes in a second straight period, Getzlaf turned the puck over to Jeff Carter, and the Kings’ center pounded a shot past the right glove of Hiller for a 1-0 lead.

Getzlaf’s redemption was immediate, as he stole the puck along the boards and moved it up ice to defenseman Hampus Lindholm, who delivered a shot that bounced off Jones to Getzlaf, who tapped it in for his 14th goal of the season.

Getzlaf has an 11-game scoring streak.

The goalies then continued their battle, with Jones surviving a power play by covering a Bonino shot from the side and a Teemu Selanne attempt.

Hiller answered by holding up to pressure from defenseman Sami Vatanen’s turnover, which led to a King shot and Carter follow.