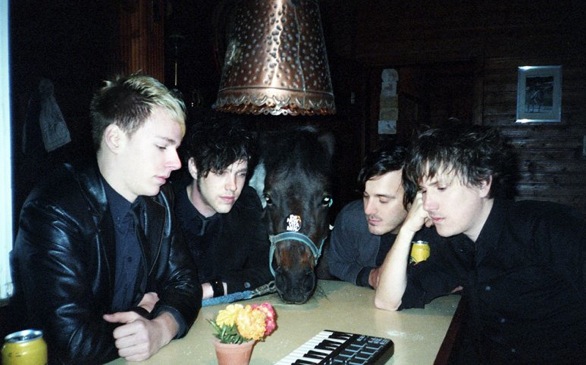 POLYVINYL’S 4-TRACK SINGLES SERIES
Polyvinyl Records has announced a 4-Track Singles Series whereby fans that subscribe to the year-long program will receive a 7-inch single each month featuring new and exclusive music from acts such as Porcelain Raft, Thao and the Get Down Stay Down, John Vanderslice and Mikal Cronin. The series takes its name from the fact that each contributing artist recorded their songs on the same Tascam 4-Track cassette recorder. Singles will be pressed on clear vinyl and also come with a download code. Each subscriber will also get a custom designed box to house all 12 singles. Other acts to be featured are Cloud Nothings, Diane Coffee (Shaun from Foxygen), Efterklang and the Mynabirds. Details are at www.polyvinylrecords.com.

GET A SMOKERS COUGH (SAMPLER) FOR FREE
Normally you would want to get rid of a smoker’s, cough but here’s one you’ll want to get: a free 11-song sampler from Brooklyn label, Smokers Cough. The freebie includes cuts from electronic musicians and beat-sculptors such as Space Jesus, GDP, Shape, The Man from Somewhere, Emily Rugburn, Faggy Smokes, White Bike, DOS4GW, Rosegold and Schlang. Get your copy at www.smokerscough.bandcamp.com.

WELCOME TO THE MACHINE
Could you learn everything you need to know about being a working musician by watching a 90-minute DVD? It might take a little longer than that, but the new MVD Visual film Welcome to the Machine will certainly give a leg up to those who want to make a living from music. The film follows the day-to-day activities of an Austrian band called The New Vitamin and is broken down into a dozen segments focusing on: choosing a band name and creating an image, playing your first live gigs, dealing with record labels, maximizing all the tools of the digital age and even, for once you’ve made the big time, dealing with fame. Additional commentary and advice come from dozens of known artists, including Peaches and members of Nada Surf, the Bloodhound Gang, Danko Jones, Finnish dark metal band Amorphis and classic rockers Nazareth.

THE SILENT COMEDY
San Diego-based Americana band the Silent Comedy haven’t exactly been, well, silent for the last couple of years. The group has provided music for the “Hatfields & McCoys” mini-series and the History Channel original series “The Men Who Built America.” Not to mention, they’ve been touring the U.K. with the Heavy and holding down a slot opening for the Dave Matthews Band. Not about to let the spotlight fade, the Silent Comedy also has a new EP out called Friends Divide that they’re touring behind. Catch these rising stars while you can; they’ll be playing a show Dec. 10 at the Troubadour.

BRICK + MORTAR: BANGS
The new EP from Brandon Asraf and John Tacon, aka Brick + Mortar, has an interesting backstory inspired by Asraf’s father, and not in a good way; his dad has a violent past as an international fugitive. Still, the music is fairly bright, and the duo sounds like British band the Verve on “Bangs,” the Police on “Old Boy” and soulful Brit-poppers on other songs, even though they hail from New Jersey. The entire E.P. can be streamed at www.brmr.net