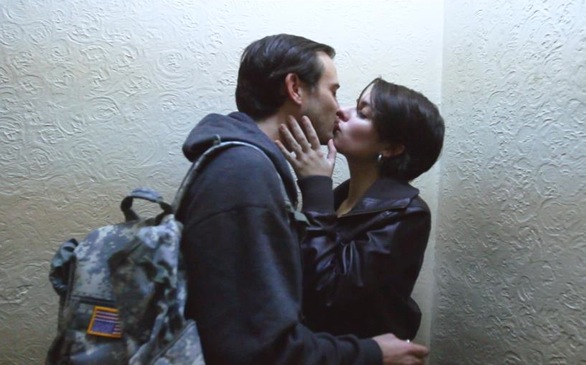 American Bomber failed to capture a steamy romance with its leads.
(Credit: Facebook.com/AmericanBomberMovie)

It’s hard to be harsh on a first-time filmmaker. Really, it is. I can’t tell you how much I’d rather support the underdog than another tycoon hocking his millions of dollars to special effects artists to create something shiny and new.

For example, director Benh Zeitlin proved that big bucks aren’t necessary to make something genuinely and uniquely beautiful with his first feature, Beasts of the Southern Wild (2012). So, there comes a time when you just have to admit that something is poorly made, despite the low-budget and filmmaker’s inexperience, and I regret to inform the public that the time is now with director Eric Trenkamp’s first feature film, American Bomber.

Alternating between documentary testimonials and a dramatic narrative, American Bomber culminates into something that can only be described as anti-cinematic. Within the first 10 minutes, instead of being pulled into the world of America’s first (fictional) born and raised suicide bomber, we are distracted by poor sound design, mechanical acting, laughable fight scenes and shoddy cinematography work that can all be compared to the likes of a student film.

The story is that of John Hidell (Michael C. Freeland) and his descent into an inescapable darkness where desire to take revenge on those who have caused him severe emotional and mental damage overcomes him. From interviews with his grieving mother to his former brothers in arms, we are supposed to gain a richer understanding of his past that that led him on the path to tragedy, including an abusive father and a tumultuous childhood of anger and resentment.

John is a Aghanistan war veteran from who had been imprisoned for six months and then released on dishonorable discharge for attacking a superior after receiving news that his half-brother Jim, the only one who truly understood him, had just been killed in battle.

After he is released and goes home to Kentucky where he attempts—to little avail—to make amends with loved ones, John conspires with creepy prison puppetmaster Barry (Kenny Wade Marshall) to take action against those that caused them so much suffering in this war. As a result, John takes a quick trip to NYC to scope out a nice place to drop a bomb.

To little surprise, John meets a girl up in “the wormy Big Apple” who makes him rethink his plan. Apparently, it only takes a couple cigarettes and a cringe-worthy, steamless sex scene with Amy (Rebekah Nelson) to convince a suicidal and depressed vet to reconsider his options.

Reconsideration may not be an option, however, with Barry’s henchmen on John’s back, urging him to get the job done, as well as the government constantly monitoring every step John takes as he traipses around the city. Keeping a low profile proves hard when he kills a fellow soldier over a squabble about who gets to do the bombing and go down in history as a martyr.

What may be the funniest aspect of the film is that, as a wanted murderer, John decides to hide in a tree and tells Amy to meet him up there—which she actually does obligingly.

The quality of production is one thing to consider; another is the actual content this weighty subject matter. From his decision to target the Saudi Arabian Embassy, which seems to make little sense in terms of whom he should want to take revenge against, to the politics of America breeding a terrorist, Trenkamp never confronts the questions he raises himself. As a result, John becomes lost in his own story, becoming an uninteresting lead, which indeed should not be the case since he has so many conflicting motivations.

In the end, Trenkamp’s attempt at tackling undoubtedly tough subject matter doesn’t compute, either thematically or aesthetically. We can see he has a lot to say, but maybe he just doesn’t know how to say it yet.