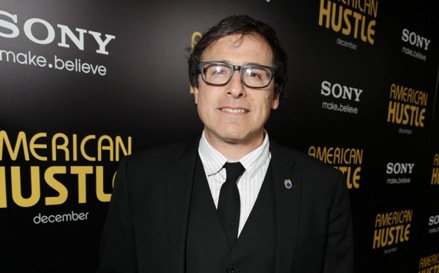 Has Duke Ellington ever saved your life?

David O. Russell knows the answer to that particular question because Ellington's music has rescued him many times. It happened yesterday. It'll probably happen again tomorrow. And it also happens near the beginning of Russell's latest movie, American Hustle, when a couple of con artists, played by Christian Bale and Amy Adams, plop down on the floor and listen to Ellington's slow-cooker classic "Jeep's Blues" and look into each others' eyes and know they've found heaven on a cracker.

"That's a piece of music I've held in my heart for over 30 years," Russell says over dinner at Ross 424, the Hollywood Hills studio where, some 16 hours earlier, he finished the final sound mix on Hustle. "You have a secret treasure chest of magic, and one day you say, 'Maybe this magic belongs in this movie. I'm going to share this beautiful thing, not knowing if anyone else is going to feel about it the way I do.' That's the danger in sharing something you love. But I don't have a choice. I need to convey that enchantment."

American Hustle (in theaters Dec. 13), loosely based on the Abscam FBI sting operation of the 1970s that ensnared seven members of Congress for taking bribes, shares much with Russell's last two movies, The Fighter and Silver Linings Playbook. They deal with people whose lives have been broken apart and who now have to reinvent themselves or perish. They sport many of the same actors: Bale and Adams worked with Russell on The Fighter, and Jennifer Lawrence, Bradley Cooper and Robert De Niro also starred in Playbook.

But there's a connective tissue holding these movies together that goes deeper than plot and players. It's a bedrock belief that genius comes from madness. It's an expertly controlled chaos that careens from the mundane to the magical. Above all, it's a music of life, a desire to show people talking and arguing and dancing and living in a way that Russell says he wasn't awake to in his first four films.

"My whole goal is, when somebody walks out of these movies, is to have them say, 'I loved that world, and I loved those people,'" Russell says. "Regardless of the mistakes the characters may have made, to love them and love being with them, to love their love for life ... that's what I want to share through film."

Russell, 55, says he has never stopped reinventing himself, but his current phase, which has seen The Fighter and Silver Linings scoring with audiences and critics (each was nominated for best picture), began after I Heart Huckabees, his 2004 "midlife crisis" movie, and a subsequent divorce. "Your world gets taken apart," Russell says of the end of his marriage. "I went through that and not trusting myself, not trusting my gut as a filmmaker."

There was no light-bulb moment paving the way to his current good vibrations, just a gradual realization that he couldn't afford certain ambivalences or darknesses (something he says he learned from his older son) and continue to have a career. At this time, he also couldn't afford to pay the rent, which is why he accepted the late Sydney Pollack's offer to adapt Silver Linings Playbook from the Matthew Quick novel. "There's nothing like being in debt to make you work and not be precious about it," Russell says.

When the financing for Silver Linings didn't come together, Russell made The Fighter and discovered in the neighborhoods of Lowell, Mass., a genuineness among the people that brought out a great affection and inspired him to undertake a new direction, going from his gut, or, as Bale's character in Hustle puts it, acting "from the feet up."

Not that the process is always smooth.

"He can't stand, as he's told me, sitting staring at [screenwriting program] Final Draft. He goes braindead," Bale says. "He said to me, 'I need to come walk around your garden with you. That's how I need to write the film. I need to walk around the garden, lay in the grass, chat with you, be in unorthodox situations, that's when I can write.' That's how he likes to work best and I think that's what makes his movies unique and that's why ultimately I enjoy working with him, even though there are moments where I feel like I could kill him. He probably feels likewise."

"With David, it's all about instinct," says Lawrence, who plays Bale's loose-cannon housewife in Hustle. "He'll whisper something in your ear and inspire you to see something you didn't before. There's not really anything he can't do with an actor. He can take you to a million different levels, a million different planets. And if you go with it, it will be the best experience of your life."

"Enchantment?" Cooper considers Russell's fondness for the word. "Yes, I've heard it a time or two. But you listen to his voice and there is a little magic in it. So it's not surprising to find it in his films."

What might be surprising about Russell? He has seen It's a Wonderful Life so many times that he knows it by heart, referencing it frequently and even acting it out on occasion. ("I just do Lionel Barrymore though," he says with a smile.) He has a 2-year-old son, Leo, adopted as a baby with Russell's "better half," Holly Davis. And his favorite thing about American Hustle might just be the wide canvas it allowed him to bring to life — five specific worlds, each with its own music and decor. He furnished the Upper East Side apartment Bale shares with Adams with pieces his mother loved. And he bound the film's lovers together by Ellington.

Asked where he finds magic in his own life, Russell initially demurs. ("You say a thing and it's not your thing anymore.") Finally, he relents, speaking with great feeling about a park in Santa Monica that's next to a church and provides him with spiritual nourishment each time he visits.

"Even talking about it, a really good feeling comes over me," Russell says. "And that's sacred. And that's what I love to put in movies. There can be many great movies in any given year, but I'm happy to have a movie that has that love of life. I've got to have that enchantment!"

Click here to win TWO TICKETS to attend an advanced screening of American Hustle in Los Angeles on Wednesday, Dec. 11, 2013.