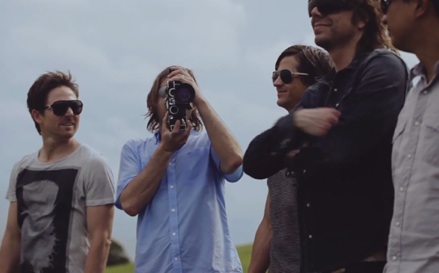 The documentary gives us a glimpse into the bond these band members share.
(Credit: facebook.com/pages/Fading-West/246835002044197)

Fading West is a tour documentary about Grammy Award-winning band, Switchfoot. Directed by Matt Katsolis of Interpret Studios, the film, which shares the same name as Switchfoot's upcoming ninth studio album, takes the audience backstage with the rock band on its 2012 World Tour, as well as gives viewers a closer look at Switchfoot’s second love: surfing.

What's unique abuot Fading West is it doesn’t follow the typical form of a tour documentary. The band describes the film as part-documentary, part-surf film and part-travelogue, and by showing these three different aspects of their tour, Switchfoot transforms itself from just another rock band to an experience as a whole. Through band members' interviews and candid videos, you get to see the ups, downs and literally everything in between that happens on the tour. More importantly, you get a glimpse into the brotherhood these five band members share.

The film takes the audience through two journeys that are intertwined. The musical journey (the tour itself) is very traditional of a music documentary; there are pre-tour nerves and worries, mic issues during performances, intimate interaction with fans and tons of music montages with previews of tracks from their new album. The travel and surf aspects of the film give the audience the chance to see the band on a completely different journey. It is through the band’s off-stage experiences that you understand that Switchfoot is more than a band…it is a bond.

The members of Switchfoot are completely candid in Fading West, and viewers will be able to tell that what they are watching are real experiences and real memories. While exploring different countries during their world tour, brothers Jon and Tim Foreman, Chad Butler, Jerome Fontamillas and Andrew Shirley take the camera into their own hands, and it feels like you are actually experiencing these moments with the band members themselves. You’re there jumping off cliffs with the group, and you’re there singing on stage with them as well. The entire journey of the tour becomes a personal experience for not only the band, but also the audience.

Switchfoot fans will without a doubt love Fading West, but the film lets everyone, even people who have never heard of the band before, appreciate the journey that Switchfoot experienced on tour.