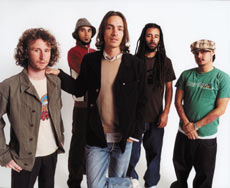 At an age when they were barely old enough to have drivers’ permits, Mike Einziger, Brandon Boyd and Jose Pasillas II started rock band Incubus. Attending classes at Calabasas High School by day and rehearsing their eclectic rock songs by night, their fan base steadily grew and flocked to their live shows at local haunts like The Cobalt Café and the Roxy.

Although most of the world first heard of Incubus after the release of 1999’s multi-platinum album Make Yourself, which spawned the radio hits "Pardon Me" and "Drive," it’s the old school Incubus fans that still rave about the thrashing guitar riffs and funky beats of 1997’s S.C.I.E.N.C.E.

Bassist Ben Kenney (who joined the band in 2003) and DJ Chris Kilmore round out the members of Incubus, adding to the band’s sound which can go from hard-hitting rock tunes to melodic ballads, evidenced in "Megalomaniac" and "Talk Shows On Mute," the latest singles off A Crow Left of the Murder. DJ Chris Kilmore talks with Campus Circle about making a difference and what it’s like to be a member of one of the world’s most popular bands.

Each Incubus album, from Fungus Amongus to Morning View, seems to have its own distinct personality. How would you describe the personality of A Crow Left of the Murder?

DJ Chris Kilmore: It’s definitely more aggressive than our last album, but at the same time, it’s more beautiful. There’s this new energy for the A Crow Left of the Murder album that we’ve been looking to create. I think we’ve come the closest to that than we ever have so far, especially with the advent of Ben (Kenney) in the band, our new bass player.

We were biting at the bit to write this record; we were just at full tilt the whole time. That frantic energy is what made this record what it is, and I think we were successful in our attempt to capture that. I also think it’s our most honest and true work that we’ve done so far.

The song "Agoraphobia" talks about shutting out the world, while "Here in My Room" is about sharing private moments. When you’re on tour, is it possible to maintain privacy?

That’s what our tour bus is for, it’s sort of like our home. When we head back to the tour bus or when we’re on a day off and go to our hotel rooms — those are our spaces. You really can’t get away from the five people in the band; it’s almost like you’re married to them.

Does that make things difficult?

No, not really. You’d be surprised at how well we take it. We’re all each other’s best friends and we treat each other like brothers, so it’s not that hard. But after you’ve been on the road for two or three months, you’ll get that feeling like, "I want to sleep in my own bed!"

Incubus has released a series of bootleg CDs of live Incubus concerts from around the world, with profits going to the Make Yourself Foundation. What inspired the band to start this charitable foundation?

I think the inspiration just came from us always wanting to help the world and make it a better place somehow, but never actually knowing how to do it or being in a position to do it. So as we started growing as a band, we started doing different charity events and donating money to different organizations, in good faith.

It got to a point where we thought that we could do it ourselves. We wanted to decide exactly where to put the money we earned, so we started [the Make Yourself Foundation]. Our goal is to raise a million dollars by the end of the year.

One of the ways to earn that money is by selling bootlegs. We figured since people are gonna do it anyway, we might as well do it, you know? We auction off tickets on eBay so you can meet us before the show, hang out a bit and take some pictures. We’re auctioning different instruments, selling some of Mike’s guitars — just as many things as we can do.

Last I checked enjoyincubus.com, the band’s fundraising total was up to $205,452. Congratulations! What are some of the charities you’re raising money for?

We highlight different charities every month on the Web site. As to which one we’re actually going to give to, we don’t know yet. We’re sort of stockpiling the money and at the end of the year we’re going to make that decision. If it were up to me, I’d give money to orphanages or an adoption agency because I was adopted myself.

The music video for "Megalomaniac" carries a strong political statement. The video is only being played on MTV’s late-night rotation, which is, in a way, a form of censorship. What are your thoughts on this?

The music industry has been political lately, especially with organizations like Rock the Vote, Punkvoter and more. What are your political views?

I’ll tell you that I didn’t vote Bush in and I won’t vote for him this time.

A lot of musicians are Democrats — they’re more liberal people, for the most part. They’re more creative and not bound by strict laws, especially in the rock world where you have that whole rebel vibe. I think that having Bush in office was a slap in the face for all those kinds of people.

Another thing that I have against Bush is that he’s cutting a lot of funding for music and art classes in schools. In actuality, when you have music classes in schools, kids do better in other courses, especially the sciences. It’s crucial for everybody to have those kinds of creative outlets.

Crow’s "Sick Sad Little World" was initially called "Turbo Geek." Was there a meaning behind the first title?

We try to write songs visually, if you can imagine that. When we’re writing songs we have all these riffs — they’re not complete songs. In order to communicate with each other to play a certain riff, we have to name it, so we pick a name for what it sounds like. The song sounded like a geek on steroids, so we called it "Turbo Geek."

How has Incubus’ live show changed on the Crow tour?

I think our show is more energetic than it’s ever been. We jam a lot more. We all have solos whereas before we weren’t doing solos, we were just playing songs and putting them together like a song journey. Now we’re sort of mixing it all up. We play cover songs, we’ve got songs that we’ve changed and older songs we’ve totally torn apart and redone.

Incubus is one of the most popular bands in the world. What’s the hardest part about living with fame?

It’s actually not hard at all; we’re all well grounded individually. I don’t think we let that side even affect us, especially in our regular lives. I think our mothers all taught us well — to respect our elders and be nice to others. It’s not like we have these big heads on us. We’ve never been like that, you know? And I don’t think we ever will be like that.