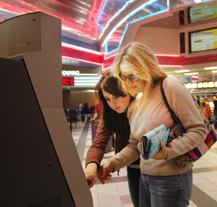 The idea came to Frank Ulrich in 1947. It was way ahead of its time. It arrived, as good ideas often do, in the form of a simple question:

What if people could pump their own gas?

How strange that notion must have sounded in an era when elevators had operators and sodas had jerks. Yet when Ulrich offered customers of his Los Angeles gas station a discount of a nickel per gallon to man the pumps and fill ‘er up, he doubled his business, selling $500,000 in gasoline in the first month.

It would take another 25 years for his strategy to catch on across the country. Even then, motorists and social commentators were suspicious: You’re asking customers to share the workload?

Now look at us. We pump our own gas, bag our own groceries, pour our own Slurpees. We check ourselves in at the airport and out at Wal-Mart. We use ATMs to get cash. We wrap, weigh and mail our own packages at the post office. We rent DVDs, buy movie tickets and process photos from machines. We navigate solo through websites to buy products, pay bills, and do our banking, or weave our way, often painfully, through telephonic, automated voice-message systems to do the same thing.

Soon, judging from technology that has been field-tested, we’ll routinely walk into a hotel lobby, bypass the front desk, and use an automated kiosk to select a room and receive a card key. We’ll pull up to the drive-through lane of a fast food restaurant, and there, using a multicolored 3-D computer screen currently being field tested by NCR Corp., we will ask and then answer the eternal question: "Do you want fries with that?"

Analysts say a third of all "service interactions" are self-serve. Within four years, it will rise to better than 50-50.

The pervasiveness of self-serve technology represents a cultural sea change, one that has crept up on us, like a real-life version of all those science-fiction films and movies featuring evil machines that take over so gradually that no one notices them until it’s too late.

Sometimes life imitates art. Just pick up a phone and try to work through the mouse-maze circuitry of an automated customer-service line to reach a human voice.

What may come as a surprise is that some machines can recognize your pain.

Though automated phone lines rank among the most aggravating self-serve devices, the speech-recognition systems that handle calls from consumers are growing more sophisticated. Some have been designed so that "at some level, emotions can be understood," says Peter Mahoney, vice president of Scansoft Inc., which designs speech software.

The newest generation of machines can respond, he says, to "certain words and the volume level." Take, for example, a customer who has lost baggage and is trying to get help through an airline’s automated response system. If the caller says "I am angry" or uses a number of other words – including those of the unprintable variety – he might be quickly relayed to a human attendant, Mahoney says.

The technology is here to stay: Having computerized systems handle customer queries and complaints costs a 10th of what it would take for a company to staff the lines with humans. So improvements, when they come, will come through technological breakthroughs.

"You’re going to see these systems become more and more adept at understanding variations in human speech," he says.

If they don’t, there is always the "cheat sheet" approach.

There is a learning curve in the new technologies, for consumers and merchants. A key: Keep it simple.

Sometimes, particularly as the devices were being introduced, the self-serve aisles in grocery stores could be a frustrating logjam of customers, who were unsure of how to use scanners. It wasn’t uncommon for them to give up, leave their groceries and walk away.

But customers have adapted: "I just use the self-serve when I have a few things," says Beverlye Neal, emerging from the self-serve aisle of an Albertsons with a single shopping bag in her arms.

Soon, supermarkets may feature a "smart cart" being test-marketed by Fijitsu Transaction Solutions. A customer would log in to a computer attached to the cart. The computer would access the customer’s previous purchases – and based on that, alert the customer to sale items.

"If it knows you buy cat food, it will tell you there’s a special on cat food when you get to that aisle," says Don Paschal, director of Self Check Solutions at Fujitsu.

No matter how sophisticated the technology becomes, it’s unlikely that merchants will stray from an early lesson of self-serve: Be sure that staffers are always on hand in case snags arise.

At one Home Depot, cashier Brian Delawder mans a single monitor, watching four self-serve kiosks as a trickle of afternoon customers slip past. Delawder is alert to the Achilles’ heel of the kiosks: If a customer scans a purchase – but doesn’t put the product down immediately on a scale that checks its weight as an antitheft measure – the system grinds to a halt.

When that happens, Delawder can simply take over the controls, like a co-pilot bailing out an errant trainee, without even moving from his station. Often, customers don’t even realize he has stepped in.

A number of expensive self-serve efforts have flopped, including a device that customers of a greeting-card shop could use to design cards. Experts say the system failed because it was just too complicated.

Mendelsohn might have added a corollary: People want to be queueless.

Americans hate waiting in line, which helps explain one of the most successful self-help devices: the airport kiosks that enable people – many of whom have made their reservations through automated, online systems – to check-in faster.

A recent study found that 38 percent of airline passengers use check-in kiosks, waiting half as long for boarding passes as passengers who use an airline representative.

"I don’t need to burn calories telling somebody who I am, where I am going and what seat I want," says Paul Schweer, a software developer who travels frequently. "And there’s none of the ambiguity and inefficiency when you’re trying to talk to somebody in a crowded airport."

Apart from the frustration of dealing with automated systems – behavioral scientists have long understood that consumers grow angry at machines faster than they get angry at human attendants – isn’t there a sentimental factor involved here? Aren’t we losing something important, the more and more we rely on machines, and the less we have "face time" with our fellow human beings?

In a word, says Ulrike Schultze, "no."

Schultze, associate professor of information technology and operations management at Southern Methodist University, studies the effects of our growing reliance on self-serve technology. "In most cases, it’s not as though you are sacrificing a valuable human experience," she says.

"Take the example of ordering a hamburger at McDonald’s," Schultze says. "The person you are talking to is just rattling off information from a script: ‘Do you want a large Coke with that? Do you want this or that special?’

"An electronic interaction isn’t going to be much different. When was the last time you had a conversation with somebody at a checkout line that changed your life?"

Distributed by Knight Ridder/Tribune Information Services.
Article posted on 1/23/2006
This article has been viewed 2360 times.