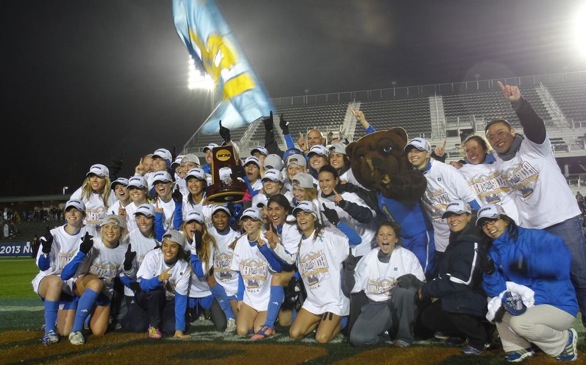 CARY — UCLA had won 109 NCAA championships, more than any other school, in its rich athletic history, but none in women’s soccer.

Sophomore forward Kodi Lavrusky scored the game’s only goal with 3 minutes, 19 seconds remaining in overtime, sending UCLA over Florida State 1-0 on Sunday before a chilled crowd billed at 8,806 in WakeMed Soccer Park.

Even the cold rain that fell intermittently couldn’t dampen the spirits of the Bruins, who defeated three No. 1 seeds and the past two national champions en route to their title, and gave coach Amanda Cromwell the distinction of becoming only the second woman to coach a women’s soccer team to the championship. Becky Burleigh did it at Florida in 1998.

Cromwell also became the second person to win the title in the first year coaching at a school, following Ali Khosroshahin of Southern California (2007). UCLA’s triumph came in its ninth College Cup trip and fourth time in the championship match.

“I can’t say enough about the team and their resolve and their resilience,” said Cromwell, whose Bruins (22-1-3) were extended through double overtime and penalty kicks before eliminating top-seeded Virginia on Friday night. “We knew Florida State was a team that always fights and scraps. They’ve scored so many goals after the 80th minute, and that was always in my mind.”

Two unlikely heroes teamed up for the game-winner. Megan Oyster, a junior center back who hadn’t registered a point all season, delivered the crucial assist, advancing the ball on the dribble to within 25 yards of goal before slipping a pass to Lavrusky on the right wing. Lavrusky timed her run perfectly into the center of the penalty area before one-touching a shot from 12 yards to the back post for her seventh goal of the season.

Goalkeeper Kelsey Wys, who made nine saves on a busy afternoon for Florida State (22-2-3), never had a chance for a 10th.

“It was the best pass of my life!” Oyster exclaimed afterward. “I’ve never done that before. I guess it was a good time.”

“The whole game we knew we had it in us,” Lavrusky said. “Once we got to that first overtime, we knew our chances were coming. We just had to finish one.”

“It was a great ball to Kodi,” Cromwell said. “I saw it on the video board (after the game). I didn’t realize just how good a goal that was. Florida State is so good at making something look open, and then it’s not any more.”

UCLA dominated possession, outshooting the Seminoles 18-5, including the only three shots in overtime, and Bruins goalkeeper Katelyn Rowland had to make only two saves all day. Taylor Smith, UCLA’s speedy forward, twice drew woodwork in the first half, hitting the crossbar from 18 yards and the left post from close range on a rebound.

Florida State coach Mark Krikorian, whose Seminoles are still looking for their first title despite advancing to the College Cup three years in a row, credited UCLA’s defensive pressure.

“If you’re not controlling the tempo of the game, you’re looking for that moment for a big chance,” he said. “We had some half chances or partial chances that with a little bit of luck might have gone our way. It wasn’t to be.”