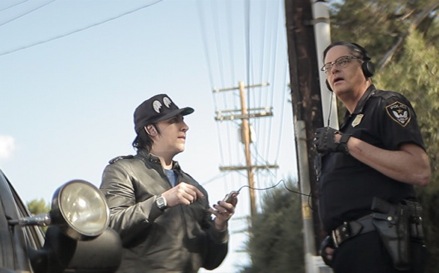 Not too many people have a taste for the absurd. Something about it, I suppose, is off-putting—alienating even. So, when it comes to a film about an electronic-music-crazed cop who sells weed via rat corpses, a boob-crazed cop who’s willing to do just about anything to get a good flash, as well as Marilyn Manson playing a pimply brace-faced teen to top it all off, some viewers may just steer clear.

However, if all of that sounds perfectly normal, then you may want to check out writer/director/everything-man Quentin Dupieux’s latest absurdist romp, Wrong Cops.

Hailing from a little town called Paris, France, Dupieux is no stranger to the odd and out there. In fact, it’s what he specializes in. Forming somewhat of a cult following from previous films Steak (2007) and Wrong (2012), the French filmmaker/electronic musician (he goes by the stage name Mr. Oizo) feeds off creating the unexpected.

But really, his 2010 film Rubber, about a car tire that goes on a killing spree blowing up everything and everyone in his path with his mind, put him on the map. He is by no means a commercial director, but underneath the absurdities lies something richly unique that makes you ate least scratch your head if it does not thoroughly entertain you.

Wrong Cops, which premiered at the 2013 Sundance Film Festival, is one of those movies with a bunch of familiar faces that you can’t peg where you know them from —perhaps with the exception of Manson, who is definitely the showstopper. His character, David Dolores Frank, is the cherry on top we never knew we needed.

There’s not too much plot except that Duke (Mark Burnham), the aforementioned weed-dealing cop, accidentally shoots a neighbor, and then tries to deal with getting rid of the body, even though he’s not dead yet. More of a nuisance than a problem, he attempts to dump the body off with client and fellow cop Sunshine (Steve Little) in return for paying off his weed debt. Of course, a slew of mishaps prove to make Duke’s task a bit tougher. Again, it’s not that big of a deal because he’s perpetually stoned and obsessed with listening to electronic music.

The script is ridiculous, the acting is farcical, and it often reminds us of the shenanigans of Reno 911 or Tim and Eric. Indeed, Eric Wareheim himself is featured as the crooked cop who’s willing to threaten just about any woman for a peak at their boobs.

In this sense, Wrong Cops does steer away from the oddball nature of Rubber. Dupieux’s latest is much more raunchy, racy and more likely to offend someone. I’m not sure that’s exactly a positive move in the director’s career, but he admittedly has one of the most unique point of views out in the business right now. Dupieux certainly has embraced the absurdist revolution of French cinema and brought it back to share with the States. And that is something worth celebrating.

Wrong Cops is remarkably LA-centric. With hazy imagery of palm trees and highways, as an Angeleno it’s impossible to not immediately feel at home, especially with the allusion to the ineptitude of LAPD.

Also, by focusing on the outrageous obsession with electronic music in this city, Dupieux aptly satirizes Los Angeles’ many eccentricities. We all probably know someone similar to Rough (Éric Judor), the one-eyed cop with dreams set on recording an amazing electronic song, only to be shot down by a big wig producer. Ah, home sweet home.

Clearly, Dupieux cannot be tamed. Though he may be polarizing audiences, I am glad to see someone steering viewers completely off the tracks and into the unknown. Some will love him for it, and some will loathe him. It’s at least cause for good dinner conversation.