Kobe Bryant Improves to a B, But Lakers Have No D 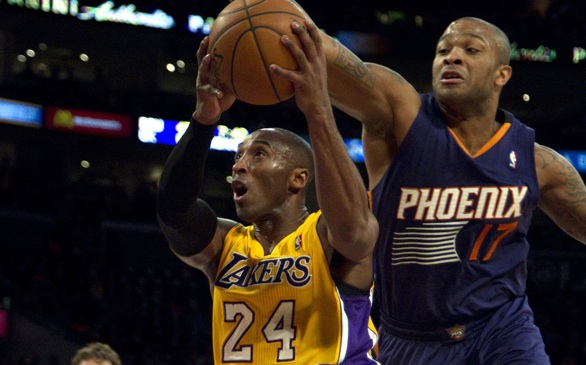 Kobe Bryant drives to the basket and is fouled by the Phoenix Suns.
(Credit: Gina Ferazzi/Los Angeles Times/MCT)

Dec. 11--Kobe Bryant keeps moving up on the grade scale he has implemented for himself.

The Lakers, though, keep getting schooled at home.

Their latest loss was a lethargic one to the Phoenix Suns, 114-108, Tuesday at Staples Center.

There was no cohesion, very little excitement and you could almost hear a home team fall below .500 with a 10-11 record.

Bryant looked better -- 20 points on six-for-11 shooting with three assists and three turnovers -- but the Lakers fell to 0-2 with him after also suffering a home loss Sunday to Toronto.

Lakers fans took out their anger on Pau Gasol, who scored 19 points but was a defensive liability and took only five rebounds in 29 minutes.

"Put your big-boy pants on, Pau," yelled a voice from the crowd in the final minute, apparently irritated that the Morris twins, Markieff and Marcus, took turns gashing Gasol down the stretch.

Phil Jackson floated into cyberspace via Twitter in the fourth quarter, urging the Lakers to make some defensive stops from whatever device he was using.

They didn't. They couldn't. Maybe they just can't right now.

Marcus Morris came close to a career high with 22 points, a not-so-refreshing occurrence for a Lakers team that already allowed six opposing players to claim career nights against them.

"Points in the paint right now is killing us," said Lakers Coach Mike D'Antoni, who wanted the Lakers' defense to "almost be like spitting blood out there."

The Lakers spit out lots of easy opportunities.

Goran Dragic had 31 points, Eric Bledsoe had 18 and Markieff Morris had 15.

Their defense rested, but not Bryant.

He was much more efficient after scoring only nine points on two-for-nine shooting with eight turnovers in his season debut against the Raptors.

He started off by getting his shot blocked on a drive but then dunked baseline after dribbling past P.J. Tucker. It wasn't his usual vertical but better than anything since his return, including an odd jump-off-his-right-foot dunk in practice last week .

Bryant also showed some spring by leaping up for a driving layup after a no-look bounce pass from Gasol.

He said he felt lighter and more comfortable after losing several pounds the last few days, adding that his wife, Vanessa, "hates me. Play one game and you lose five pounds."

He gave himself a "B" grade Tuesday after giving himself an "F" in his season debut, which he amended to a "D" the following day.

Bryant missed an eight-foot baseline turnaround and stopped to complain to referee Joe Crawford just long enough that his defensive assignment, Tucker, scored a fastbreak layup at the other end.

On another play, one of Bryant's passes was stolen by Bledsoe, and the Suns were off and running at the other end, Channing Frye dunking to finish the play.

But the Suns showed some respect for Bryant, sometimes sending another player for a double-team.

Bryant showed some nice variety in making an impact, hitting a 20-footer from the left wing, a 16-foot bank and then finding Steve Blake alone under the basket for an easy layup.

He also backed Tucker down and hit a turnaround from 12 feet.

"I felt really comfortable in terms of where to operate from," said Bryant, who set more screens than usual and downplayed a heating pad on his foot, saying he often felt foot soreness at the start of past seasons.

"It's a process. You just continue to figure out what you can and can't do. Every game you try to step out and do a little bit more...and just go from there."

The Lakers were exposed defensively, though, Bryant joining D'Antoni by listing it as his biggest complaint.

"We let teams penetrate the paint and get a lot of points right at the front of the rim," he said. "We've got to step in and take some charges. We're not a big shot-blocking team per se, but we've got to plug up the lane and stop penetration."

On offense, the Lakers were partly guilty of standing around and watching Bryant. Perhaps Blake said it best.

"I wish we could have training camp to figure things out," he said. "Once we do figure it out, I think we'll be OK. Such a dominant player like Kobe, all of us need to learn to play around him."