Same Game, But Jobs Are Different for NFL, College Coaches 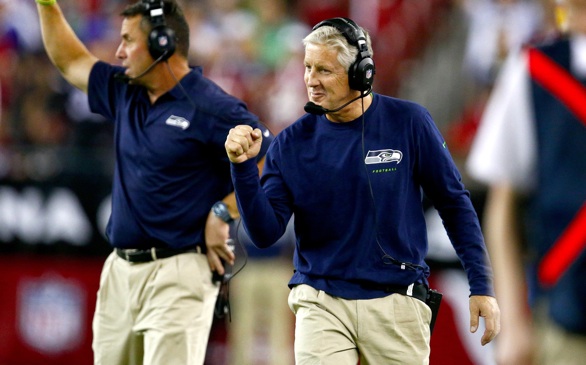 They coach the same game, with the same-sized fields and same oblong ball. They both wear whistles, headsets and sunglasses that hide sleep-starved eyes closer to X’s than O’s.

“When you’re in the NFL, and you’re going to do something that’s going to help you win, no one ever says, ‘What does it cost?’ ” said Jerry Glanville, who coached at Portland State more than a decade after coaching the Houston Oilers and Atlanta Falcons.

“When you’re in college and you say, ‘I want to get this done,’ they say, ‘We don’t have the funding. By the way, would you go raise the funding?’ ”

The differences go well beyond that, including the challenge of recruiting high school athletes, how the players interact with each other and the day-to-day responsibilities of the coaches.

“When kids get in trouble and screw up in college, everybody feels the responsibility for it,” said Seattle Seahawks coach Pete Carroll, USC’s coach from 2001-09. “Here, it’s more on the player. You don’t feel so terrible because the players are grown-ups. They’re getting paid, they’re professional. They’re supposed to take care of their own world.

While those coaches are gearing up for the final push in the NFL’s regular season, their old college counterparts are hitting the road for that vital recruiting stretch between the end of the season and bowl games.

“What you have to have in a college coach is somebody who can absolutely bust his butt recruiting,” said agent Bob LaMonte, who represents multiple NFL and college coaches. “I don’t mean a little bit of the time. I mean 24/7, 365. The coach will sell his soul to the devil for time. He will not make it if he doesn’t give his life over to recruiting.

“There’s no end to the time you’ll spend. If you don’t do that, I guarantee you will fail as a head coach in college.”

The recruiting that goes on in the pros is the courting of free agents, although those player decisions often hinge on which team is willing to pay more. There are exceptions, of course, but for the most part the ability to recruit is far more important in college.

“I took great pride in my recruiting,” said Barry Switzer, the longtime Oklahoma coach who later won a Super Bowl as coach of the Dallas Cowboys. “I worked hard at it. First of all, I had a great product to sell. When you have the University of Oklahoma to sell, I’m selling Mercedes. I’m not selling Volkswagens. So I had an advantage. Kids were going to listen to me. Families were going to listen to me. We were winning tremendously in my era.”

NFL teams play eight regular-season games on the road. In a sense, when it comes to recruiting, college coaching is one continuous road trip.

“My schedule (at Oregon), the day the season was over was a lot worse than my schedule here” in Philadelphia, Kelly said. “Because, you know, you’re planes, trains and automobiles recruiting from Sunday night until Friday afternoon and hustling back and practicing, getting a practice in Friday afternoon, practice Saturday, practice Sunday, get back on a plane and fly around the country chasing down recruits.

“Maybe a misconception is when you’re a college coach and the last game is done and then the bowl game comes, you don’t have a month off. I would argue my schedule was more hectic from a recruiting standpoint than it was here. So I’m looking forward to being in the office every day and watching tape. That is the fun part of our job.”

UCLA coach Jim Mora, who formerly coached the Atlanta Falcons and the Seahawks, said he prefers college football because of the “energy and enthusiasm” surrounding the game, as well as the enhanced responsibilities coaches have.

“The relationships with players, it’s different,” he said. “They are younger. They are more impressionable. They need you more in their lives. You’re dealing with mothers and fathers rather than wives and agents. It’s much bigger than football.

So much of the job comes down to selling the school on a prospect and his family. When Glanville was a linebackers coach at Georgia Tech in the early 1970s, it wasn’t uncommon for him to be sharing a couch with a rival coach, sometimes a coaching legend, fervently vying for a recruit.

“I’ve sat in a living room talking to a kid,” Glanville said, “and it’s me and (Ohio State’s) Woody Hayes. Me and (Alabama’s) Bear Bryant. Me and (Auburn’s) Shug Jordan. When I’m sitting in that room with Woody Hayes, I’m going to try and compete and kick his butt recruiting that kid. I got a kid to come with me instead of going with Bear Bryant. You know what Bear did the next year? Tried to hire me.

“You come to a recruit’s house at a scheduled hour. Well, the good guys, when their hour is over, don’t leave. They’d say, ‘He hasn’t left.’ And I’d say, ‘Doesn’t bother me. I’m coming in.’ I loved every minute of it.”

College football separates the good recruiters from the lousy ones.

“Some guys could recruit tremendously for three months, but they couldn’t close the deal,” Glanville said. “Sometimes you’ve got to get mad at a guy as you recruit him and you’ve got to close the deal. I can’t tell you how many times I told a guy I’m glad that he committed and he never really did. I’d say, ‘Let me go tell your mom!’ And he’d say, ‘You’re telling my mom? Oh, God, I just committed?’ ”

Then there was the recruit who informed Glanville that he had decided to commit to Tennessee, where the player’s father was in the Hall of Fame, and that he planned to announce it at a news conference that afternoon.

In college and the pros, the pressure to win is tremendous. The college game might be slightly more forgiving in terms of giving a coach time to build a winner, but huge salaries bring huge expectations. According to LaMonte, there are more than 50 coaches in the NCAA who make an annual salary of $1 million or more, and the average NFL head-coach compensation is $3.75 million.

“The pro coach has to deal with the ability to be anything but a head coach, except on Sunday,” LaMonte said. “The reason is, because of what’s happened in the NFL, a head coach by definition is more of a CEO than a coach. It’s not about the X’s and O’s, it’s about the CEOs.

“He has to deal in singular purpose with a billionaire owner. Unlike a college setting, where a coach can be somewhat of a coach in a castle — most university presidents and athletic directors don’t make nearly what the head coach makes. In the pro environment, the king in the castle is the billionaire owner.”

If that billionaire owner is a good one, that can make life a lot simpler for an NFL coach. The job does not entail pleasing countless administrators, boosters and alumni. Nor does it require winding your way through a labyrinth of NCAA rules.

“Everything makes more sense in the NFL,” Carroll said. “It’s more logical, more sensible, more understandable. The way they scrutinize makes more sense. The NCAA, in my opinion, doesn’t look at the right things. They’re trying to catch people doing things wrong, and you don’t feel like they’re trying to protect the university and the player as much as the league does.”

But Carroll added: “Representing the university and everything, that’s really special in college. That’s different here. There’s more longevity, there’s more history in the college game than there is (in the NFL). We’re in a more temporary world here.”

Although their playbooks might look similar, Switzer said, NFL and college coaches live in different worlds with distinctly different missions.

“A college coach sees every player — when you recruit a player, you’ve got him for life. You can wrap that up with one sentence.”

A dozen years after he coached the Falcons, June Jones took over as coach at Southern Methodist. He said people are more willing to accept a coach going from the NFL to college than the opposite.

“Going from college to the pros, you get second-guessed on everything because you haven’t been in the pros,” Jones said. “The guy at Tampa (Schiano) won, and deserved the opportunity to get the Tampa job. And he’s being criticized because it’s different, and, ‘you can’t take the same approach as in college.’ ”

During the college football season or designated training periods, coaches can work with their players a maximum of 20 hours per week. In the NFL, there are no such time constraints, although players get one day off per week. However, that doesn’t necessarily mean NFL offenses and defenses are more complex.

“I’d say the complexities of the game, to be quite honest, in college you see more things,” Jones said. “When I was in the National Football League, it was pretty consistent. Everybody did the same things on defense. … In college, you see all kinds of weird things. Because coaches aren’t afraid to try different things. So you see way more differences in the blitzes and alignments.”

Regardless, there are fundamental differences between college and pro players. From Glanville’s perspective, it takes just one bus ride to recognize that.

“In pro football, when you leave the hotel and you get on the bus to go to the game, it’s total silence,” he said. “If any conversation were to come up on that bus, it would be about a game assignment.

“When I went to Hawaii (as defensive coordinator under Jones), I was shocked. They were talking about other things. These kids are 18 years old — guy might be talking about his Game Boy. He’d say, ‘I set a record on my toy here!’ I’d be like, ‘God, I can’t take it!’ You forget these kids have other lives that you’re not involved in and don’t want to be.”

But sometimes — especially on the recruiting trail — you just have to fake it.

Said Glanville of one memorable visit: “I had a guy from Georgia Tech tell me, ‘I want to thank you for asking for seconds on my mother’s cake. We all knew it was terrible, and you ate two pieces.’ ”