Kings Goalie Jonathan Quick is on Pace to Play for U.S. at Olympics 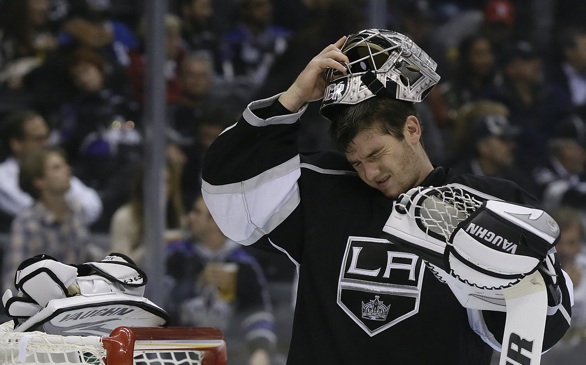 Jonathan Quick during a break in the action against the Ottawa Senators at Staples.
(Credit: Robert Gauthier/Los Angeles Times/MCT)

TORONTO — Kings goaltender Jonathan Quick, who hasn't played since he strained a groin muscle on Nov. 12, remains on pace to play for the U.S. Olympic team at the Sochi Games.

David Poile, Team USA's general manager, said Thursday he had been told by Kings General Manager Dean Lombardi that Quick is expected to return within a few weeks. That would leave time for him to regain top form before the U.S. opens against Slovakia on Feb. 13. Quick was the third U.S. goalie at the Vancouver Olympics, where the U.S. won a silver medal.

Quick is among several U.S. Olympic hopefuls who are injured; others include Pittsburgh defenseman Brooks Orpik (concussion) and New York Rangers forward Ryan Callahan (sprained knee). Poile cited Quick as an example of how Team USA executives will handle those uncertainties.

"The information that we have from Los Angeles, specifically from Dean Lombardi, tells us that he's going to be back before the end of the year," Poile said. "If he's a guy that we want on the team, we will name him to the team.

"If, for some reason, between then and the start of the Olympics he can't play because this injury didn't come around or what have you, we will be able to replace that player. ... If we think any of these players are going to be on the Olympic team or we want them on the Olympic team and they're going to be healthy by Feb. 11, then we'll have to leave them on the team and then we'll have to deal with replacing them if their injury doesn't come around."

Rob Blake, the Kings' assistant general manager, said Quick was scheduled to return to the ice Thursday for a light skate. "Very limited time and see how it reacts the following day," Blake said.

The U.S. men's and women's Olympic teams will be announced on Jan. 1 during the telecast of the Winter Classic between the Detroit Red Wings and Toronto Maple Leafs.

A Kings spokesman said that because players had a day off Thursday, no update was available on the condition of center Colin Fraser, who suffered an apparent concussion Wednesday during the Kings' 3-1 victory over the Toronto Maple Leafs. An update is expected Friday.