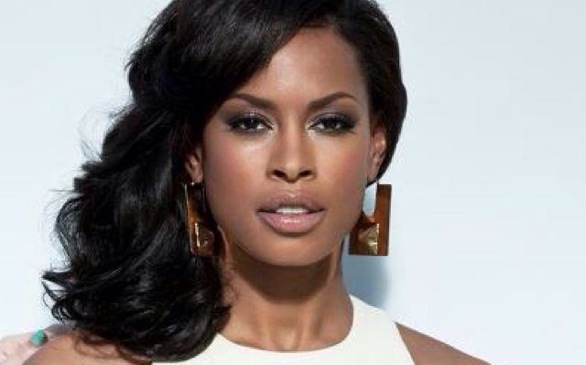 From NYC to L.A., this actress is enjoying life with her family, friends and co-stars.
(Credit: Martha Elena Vassilakis)

You might recognize Kearran Giovanni from her role as Detective Amy Sykes on TNT’s crime drama, “Major Crimes.” On screen, Giovanni is an ambitious police detective and former military veteran. Off screen, she’s a wife/mother who enjoys cooking, going to the beach and exploring (and getting used to) Los Angeles.

The 31-year-old recently spoke with Campus Circle. Very talkative and cheerful, Giovanni discussed her transition from the East Coast to the West Coast, the TV show, getting into acting and, more importantly, the importance of pursuing your dreams.

Campus Circle: How did you get involved in acting?
Kearran Giovanni: I first started out in gymnastics and dance a long, long, long, long, long time ago (laughs). Then I segued into musical theater in college. My other option was OBGYN. So, there you go. I got into school for both and decided that I would like to try [acting], and went to school for musical theater. I went to a conservatory of music called CCM [College Conservatory of Music in Cincinnati, Ohio]… I did a showcase, I signed to an agent, who I have now, and basically started here on Broadway. I got my first show a month later in “The Lion King,” and that was my thing.

CC: I find it really interesting you had two choices on where you could’ve gone with your career. Do you have any advice for someone who might be in a similar situation or who wants to be an actress?
KG: Yeah, I definitely had the two choices...but I felt such a pull to do something I was really passionate about. There were a lot of other careers that I looked at and thought, “Ok, I’ll be a doctor. I’ll be a lawyer. I’ll be this, I’ll be that”… I look at myself now, and I don’t think I would ever retire. Why would I retire from acting? I’m going to die eventually. There’s no reason to because…it’s not “work” for me. It’s still like a high -- it’s still exciting! I can’t ever imagine saying, “Oh, I’m done with that.”

CC: You recently moved from L.A. to New York. Overall, how do you like Los Angeles?
KG: I like it. I like L.A…it’s definitely a shock.  It’s definitely apples and oranges; I can’t really compare the two…I love the beach, I love the weather, I love having a house with a backyard, but I miss the culture of New York. We took the kids to the Lincoln Center [in New York], and there are a hundred things within a block for them to do. I miss the restaurants in New York, but that’s what planes are for, to come back for a weekend here or there.

CC: Are there any restaurants in L.A. that you enjoy dining in?
KG: We really like Red Medicine…I definitely enjoy eating a lot of Mexican in L.A. because it’s a different kind of Mexican than in New York, and it’s a different kind of Mexican that’s even in Texas. It’s an L.A.-style Mexican. So, the Kogi BBQ truck and stuff like that, you can’t find that anywhere besides L.A. A lot of the guys on the show have taken me to random taco joints that are, like, in someone’s basement, and I’m like, “Um…are you sure about this?” (laughs).

CC: Do you see a lot of theater here in L.A.?
KG: There’s not a lot, honestly, in L.A…There’s good theater here, but it’s not like being in New York where you can walk down the street and bump into three Broadway shows. I think they’re trying to bring more theater [to L.A.]…

I kind of haven’t stepped into a theater in awhile just because I do miss it. You go, “Ah, man!” There’s the smell of theater, there’s the lighting of theater – there’s just nothing like it. So, I haven’t really gone back yet.

CC: What are some other things you like to do in L.A. when you’re not working?
KG: We love going to the beach. When we moved here last year…I was like six shades darker because we went to the beach every single weekend. We were those people with the pop-up tents. We go to the beach a lot because with the kids, it still hasn’t worn off yet. We do dinner a lot. We also play golf. A lot of the cast plays golf, and my husband plays golf, so we hang out and play golf every now and then. So that’s it: Cooking, eating, golfing…life is not tough, I’m not going to lie. It’s pretty good.

CC: For your role on “Major Crimes,” you had to train with former CIA personnel and sniper artillery specialists. What was the most challenging part of that training?
KG: I had to learn how to not look terrible carrying a gun. Anyone can hold a gun, and anyone can shoot a gun, but it’s about looking like someone who had military training. One of the guys they brought in was a Green Beret and a Navy SEAL. He taught me how to not just look like a police officer carrying a gun but how someone with military training would carry a gun. To this day, I still think I look funny carrying a gun…

CC: For the rest of this season of “Major Crimes,” what can we expect?
KG: These next few episodes are nail-biting…they’re kind of gory, I’m not going to lie. I was surprised. I was like, “Oh my gosh, is our audience going to be okay seeing all of this stuff?” It’s pretty gory. And um…maybe Amy will get a love interest…maybe. Who knows? I’m dying for her to get some sort of, like -- something!