Ralph Fiennes' The Invisible Woman: The Price You Pay for Being the Other Woman 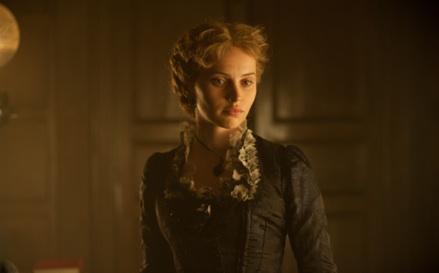 We’ve all heard stories about the other woman. Whether it’s through movies like Unfaithful, television shows like “Scandal,” on daytime talk shows or within our own lives, we know affairs do happen. What we might not be aware of are the consequences the other woman faces when the affair is kept a secret, hidden from anyone’s knowledge. Instead of enduring gossip and cruelty, she has to pay an arguably heavier price: living a life of invisibility and struggling to find her identity.

Ralph Fiennes directed and stars in the period drama The Invisible Woman, a film about 19th century celebrity writer Charles Dickens’ affair with 18-year-old actress Nelly Ternan (Felicity Jones), an introverted, self-contained, quiet yet strong young lady. Apart from being the celebrated author whose work such as Great Expectations, A Christmas Carol and A Tale of Two Cities we read in middle school and high school, Dickens (Fiennes) was an extroverted man who loved his fame and work probably more than his wife, Catherine.

When Nelly arrives with her mother and sisters to perform in Dickens’ play “The Frozen Deep,” Dickens does perhaps what many middle-age men might do when they experience a sort of mid-life crisis and meet a beautiful young woman: he develops a connection with Nelly and begins a romantic, sexual relationship with her.

“I think Nelly was it for him,” said Fiennes, who has been nominated for two Oscars (Schindler’s List and The English Patient). “For some reason, she somehow came into his life, and that was the big love of his life.”
Jones, a charismatic young actress who appears in Lena Dunham’s “Girls” and The Amazing Spider-Man 2, said, “I think there was a profound and deep connection between them, and I think it was probably in their differences…Nelly saw beyond the fame and the adulation, and she actually loved Dickens for essentially who he was. I think he felt she was someone he could be himself with.”

Fiennes admitted that he was quite ignorant about Dickens prior to this film, which is based on Claire Tomalin’s 1990 biography of the same name. To him, Dickens was not a simple man to understand. “…This was a brilliant, complicated man who’s so different with emotional extremes, and I knew so little about him,” he said. “He was on one hand, this incredibly vital socially gregarious, very furiously active man…He was very self-oriented, but I think his work ethic was sort of very frightening and brilliant, and no one could keep up with it. I think he was driven by his sense of injustice as a child.”

Growing up, Dickens had to take on the responsibilities of a man because his father was in debt. He started working at a very young age and was unable to really have a childhood. It is theorized that this is perhaps why Dickens fell in love with Nelly – he wanted to reclaim the youth he lost. “It was almost like he wanted to start his life again,” said Jones.

Dickens ends up separating from Catherine, but it is impossible for him and Nelly to have a relationship in the public eye. The news of Dickens’ affair would not only hurt his reputation; it would destroy Nelly’s. Thus, the two are forced to have a secret relationship, hiding from the rest of the world.

Normally, we might depict the other woman as the villain in a situation like this, but Nelly’s clear abhorrence about being a mistress makes her an unexpected protagonist in the film. “There was something about Nelly’s predicament that I found interesting, that she didn’t want to be a floozy mistress…She had more self-respect than that,” said Jones.

In one scene, Dickens takes Nelly to see his friend’s mistress, Caroline. Living comfortably in a separate house that her husband provided for her and her daughter, Caroline is kept hidden from the rest of the world. Her lover pops in from time to time to check on her, but he doesn’t live with her. From a woman’s perspective, this situation seems unfair. Yet, the film stays true to a time period where people, especially women, had to live within these strict societal conventions, conventions that make Nelly despise being the invisible woman.

“[Nelly is] actually very judgmental of Caroline’s situation, and it’s like she can see that’s about to happen to herself,” said Jones. “It’s what she’s fears and ultimately what she becomes.”

Yes, what Nelly ultimately becomes is invisible. Audiences see her invisibility clearly when Dickens houses her away from the public eye, takes her to another country when she gives birth and pretends he doesn’t know her at the scene of an awful accident.

There is also a subtler way in which director Fiennes demonstrates Nelly’s invisibility: he takes beautiful shots of just Jones’ back. “…The back of someone is expressive because of what you’re not seeing,” said Fiennes. “When you do see them, it has a heightened effect…what are they? What’s going on? It’s a mystery.”

After watching Fiennes’ film about this mysterious, invisible woman, audiences will see how an affair has an emotional effect on everyone involved, including the other woman. “Infidelity…I don’t think it ultimately leads to happiness. It’s painful for both the person who’s being cheated on and also for the people cheating. It’s an experience that comes out of pain and results in pain,” said Jones.

The Invisible Woman releases in New York and Los Angeles on Wednesday, Dec. 25, 2013. You can purchase tickets to see it at the Laemmle Royal Theater by clicking here.

Enter to win a movie poster for The Invisible Woman here.