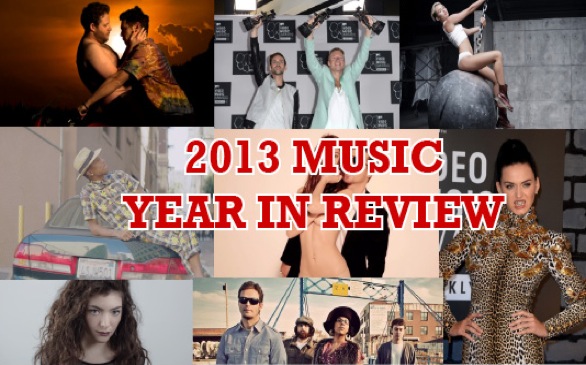 HOT NEW ARTISTS:
We experienced probably some of the best new musical artists this year!

Ella Yelich-O’Connor, also known as Lorde, is not your typical teenager. This 17-year-old New Zealand singer/songwriter became popular with her hit song, “Royals” from her album, Pure Heroine. Her music video reached more than one hundred million views on YouTube, and it is still increasing. “Royals” is still on Billboard’s Top 100 charts. Lorde’s songs and voice will send chills up and down your spine.

Macklemore & Ryan Lewis became top-streamed musicians on Spotify. Their album, The Heist, won Best Hip-Hop/Rap Album award at this year’s American Music Awards, and even though they were in Miami during the AMAs, they still performed their hit song “Can’t Hold Us” via a live satellite feed. The most memorable part of the awards shows was their acceptance speech, where they honored Trayvon Martin and those who are victims of racism. They weren’t just passionate about music but also the importance of tolerance.

It started with two people from high school playing music together. Add two more people to the duo, and you have the Alabama Shakes. Brittany Howard, Zac Cockrell, Steve Johnson and Heath Fogg never thought they would play music together. The song “Hold On” from debut album, Boys & Girls, was performed on “SNL” and the “Conan O’Brien Show.” The music video shows how soulful Howard’s voice is and how raw the band’s music is. Interesting fact about the song: it was all on-stage improvisation.

Ahhh…Miley Cyrus. Her name has popped up countless times in articles, on websites and television. The ex-“Hannah Montana” star really showed the world that she is not 13 years old anymore by straddling a concrete ball nude in her “Wrecking Ball” music video. While “Wrecking Ball,” from her newest album, Bangerz, is an emotional song of regrets, Cyrus was not afraid to show her skin during her American Music Awards performance. And of course we cannot forget the performance that started it all: her duet singing “Blurred Lines” with Robin Thicke at the MTV Video Music Awards, where she donned skin-colored latex suit, two little hair knots on her head and twerked throughout the song.

Even though Robin Thicke just stood there during most of his performance with Cyrus, his song, “Blurred Lines” featured him surrounded by girls in skimpy underwear or just topless (if you watch the uncensored version of the video). It was also one of the most controversial and talked-about songs in the nation. For some, it was just entertaining music – for others, “Blurred Lines” promoted rape. Thicke’s song inspired a feminist version, “Defined Line,” performed by Auckland Law Revue. It’s up to you to judge.

Speaking of parody, Seth Rogen and James Franco created a hilarious music video that went viral. A spoof of Kanye West’s “Bound 2” video where Kim Kardashian rode on West’s motorcycle topless, you can only guess who was semi-naked for the “Bound 3” (Hint: it wasn’t Franco). Place both of the videos side by side, and you’ll notice each frame is almost identical. Franco nails his role as Kanye, while Rogen gazes seductively into the camera, pouting his lips and smooching Franco.

Pharrell Williams made the world’s first 24-hour music video. “Happy” is a song from the Despicable Me 2 soundtrack, and I’m sure all the minions are very happy about this. The song is four minutes long and was repeated for 24 hours straight. The video shows Williams clapping and dancing on the parking lots and streets. Bystanders, including Steve Carell and Magic Johnson, also joined in the movement.

An honorary mention goes to Ylvis’ “What Does The Fox Say” music video. The duo consisting of brothers Bård and Vegard Ylvisåke has been part of the comedy music scene since 2000, and somehow this song went viral. The song is about animals and the sounds they make. The dog goes, “woof,” and the cat goes, “meow.” But now when I think about it, what does the fox say?

Katy Perry had a contest, which she called out to all high schools to create a music video for her debut song, “Roar” from her album, Prism. The winning high school got a free concert from her that was filmed live on “Good Morning America.” Perry ended up choosing Lakewood High School from Colorado. Its music video is a one-shot take of more than 2,000 students lip-dubbing.