Las Vegas Bowl: USC a Threat for Fresno State, Even with Interim Coach 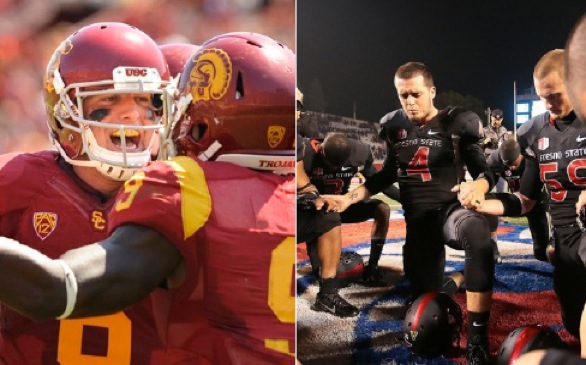 In some cases, an interim tag placed on a college football coach just before a bowl signifies a white flag.

But in other cases, the label has helped galvanize a team to finish out a season strong.

Fresno State has experienced both scenarios in past bowls -- winning against one interim coach and losing to another -- and even Tim DeRuyter won his first game as an interim coach with Texas A&M before taking over at Fresno State.

And coming up next in Saturday's Las Vegas Bowl is a USC program that's on its second interim coach of the season and third head coach overall.

The Bulldogs (11-1) certainly aren't overlooking the Trojans. They're not feeling sorry for USC (9-4), either.

"It's USC -- one of the biggest name schools in college football," DeRuyter said after Monday's practice. "They might have an interim coach, but that's really none of our concern. They've still got the same players -- very talented players. When you watch them on film, their size, their speed, that gets your attention.

"Outside of facing Oregon last year, this USC team is the most talented team we will have faced since we've been here."

The Trojans -- who aspire annually to national championships -- enter the mid-tier bowl against a mid-major team playing for Clay Helton, the offensive coordinator who was promoted to interim coach for the game after USC hired Steve Sarkisian from Washington. That move led to Ed Orgeron resigning after eight games as the interim coach who replaced the fired Lane Kiffin.

Many USC players said they were disappointed that Orgeron didn't get the job after the Trojans went 6-2 under him. Helton is trying to re-direct his players' attention.

"To have the opportunity to get your 10th win, to get double-digit wins," Helton said, "that puts you in a realm as far as accomplishment with a football team that you can walk away from a season extremely proud of."

Fresno State has heard an interim coach talk optimistically before, only for his team to play uninspired once it faced some adversity.

In the 2007 Humanitarian Bowl, Fresno State won 40-28 against Georgia Tech, which had fired coach Chan Gailey a few weeks before the bowl and replaced him with defensive coordinator Jon Tenuta.

But three years later, Fresno State was embarrassed 40-17 in the Humanitarian Bowl by Northern Illinois, which was led by an interim coach. At the time, linebackers coach Tom Matukewicz was one of the few Huskies holdovers for the bowl after coach Jerry Kill was hired at Minnesota and took both his offensive and defensive coordinators.

DeRuyter also understands the power an interim coach can have at rallying a team together one last time. Just before taking over at Fresno State, DeRuyter served as interim coach and led Texas A&M to a 33-22 victory against Northwestern in the 2011 Meineke Car Care Bowl.

DeRuyter said he hasn't brought up USC's coaching situation to his team, though players seemed well aware of it.

"We don't care who's coaching them or what kind of turmoil they've been through -- couldn't care less," said senior cornerback L.J. Jones, who has missed the past five games with a knee injury but is attempting to make a return for the bowl.

"That's stuff they have to worry about and deal with. All we care about is getting our first bowl win and getting our 12th win. We want to finish this season on a high note."

Fewer than 700 tickets remained for the Vegas Bowl, executive director Dan Hanneke said Monday. Meanwhile, Fresno State had sold 7,200 tickets of the 11,000 allotted to the school by the bowl.

"We're hoping for a sellout -- almost there," Hanneke said.

The Vegas Bowl is played at UNLV's Sam Boyd Stadium, which seats a maximum 36,800 with the ability to seat more than 40,000 when called for. Six of the past eight Vegas Bowls have been sellouts, including the 2006 game between Oregon and BYU that brought a record 44,615.

All-America selections by The Associated Press and CBSsports.com will be announced Tuesday.