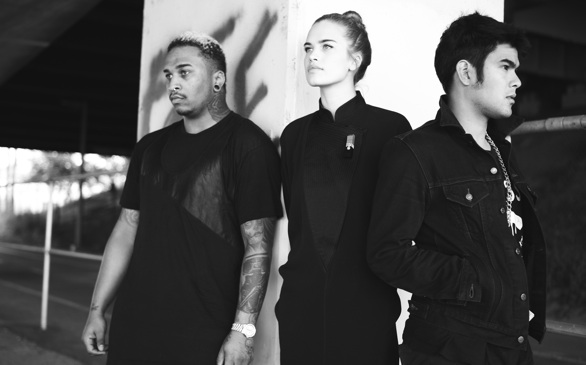 IT’S U.G.L.Y., AND IT’S FREE
The Los Angeles-based electro-bass trio U.G.L.Y. has just released a new EP called DMT, and you can download a copy for free. Created by band members Braxton Olita, Stormi Henley and L.A. native Mijo, the six-song debut effort came about in part thanks to lots of support from KCRW. The band really caught the ear of on air personality Chris Douridas, leading to heavy airplay on the station’s all-music channel, eclectic24. Things went crazy from there. U.G.L.Y., which by the way stands for “Under Greatness Lies You,” will be getting additional exposure on a worldwide basis in 2014 when keyboard player Stormi, a former Miss Teen U.S.A., appears in an advertising campaign for Abercrombie & Fitch. Get to know U.G.L.Y. now by grabbing your free copy of DMT at www.uglyofficial.com.

WARNER BROTHERS RELAUNCHES VINYL SITE
Warner Bros. Records has re-launched Because Sound Matters, its online vinyl record store. The site basically has on offer every piece of vinyl that Warner and affiliated labels have available at any given time, including titles from The Wild Feathers, Atlas Genius, Siberia, Built to Spill, Gallows and Foxboro HotTubs. Vinyl lovers can find box sets from Tegan & Sara, Disturbed and others, while fans of picture discs can purchase titles like Carry On from Avenged Sevenfold and Christmas on Mars by the Flaming Lips. The site, which is optimized for mobile phones, also stocks a large variety of T-shirts and often has flash sales. Visit www.becausesoundmatters.com.

METAL MASTERS COMING TO ANAHEIM
The fifth incarnation of the Metal Masters clinic series will take place at the Anaheim House of Blues on Jan. 22. Attendees will have a chance to see performances and instructional lessons given by legendary metal stars such as Philip Anselmo of Pantera, Kerry King of Slayer, David Ellefson and Chris Broderick of Megadeth, and Charlie Benante and Frank Bello of Anthrax. Also appearing will be Billy Sheehan, Mark Portnoy, Gary Holt and Rex Brown. Admission to Metal Masters 5 is $25; find ticket info at www.samsontech.com/metal-masters-5.

SPINDIO
Want to find the hottest bands in any city that you’re traveling to or find out which local reggae band is playing in a certain neighborhood? There’s a new live music discovery platform called Spindio that can help fans immerse themselves in local music scenes, making it much easier to find the music you want while in an unfamiliar city. Those attending large festivals can get things sorted with Spindio too; the interface allows users to preview music from everyone scheduled to play. Spindio works on all PC and mobile devices and does not require an app or a download. Give it a try at www.spindio.com.

3 DOORS DOWN ACOUSTIC SHOWS
Here’s a chance to see hit makers 3 Doors Down in a relaxed setting; the band’s Acoustic – Songs from the Basement show comes to both area House of Blues locations in January. The intimate performances will even offer a limited number of fans a chance to watch the show while sitting on a couch right on the stage. Jan. 14 is the date for the Hollywood H.O.B. with the Anaheim H.O.B. show taking place Jan. 20.

SCAVENGER HUNT
Don’t let the name fool you; you won’t have to look too hard to find Scavenger Hunt, the dreamy electro pop duo consisting of Dan Mufson and Jill Lamoureux. The L.A.-based act won’t drop its debut EP until next year, but right now you can hear new single “Lost” at www.pigeonsandplanes.com or the duo’s cover of Kings of Leon tune, “California Waiting” at SoundCloud. There are plenty of upcoming local shows, too; Scavenger Hunt plays the Spare Room at the Roosevelt Hotel on Jan. 9, the Satellite on Jan. 20 and the Bootleg on Feb. 8.