Coach Who Was on Sarkisian’s Staff at Washington Under Investigation 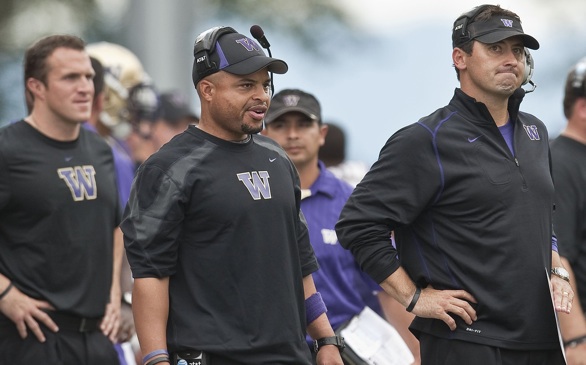 LOS ANGELES — USC and Washington are investigating whether a football coach who worked under Steve Sarkisian at Washington violated NCAA rules by paying for private tutoring and online classes for a recruit.

The allegations surround the recruitment of Andrew Basham, a former defensive lineman at Lynnwood High in Washington, who signed a letter of intent with the Huskies last February but did not qualify academically to enroll.

Mike Davis, a throwing coach who helped Basham win a state shotput title, told the Los Angeles Times that Tosh Lupoi, Washington’s defensive line coach, gave him $3,000 to cover private tutoring for Basham through a test preparation company. Davis said he also received $1,500 from Lupoi to reimburse Basham’s father for online classes Andrew could use to raise his grade-point average.

NCAA rules prohibit universities from paying for a prospect’s academic services. Head coaches are required to “promote an atmosphere of compliance” and are held responsible for the actions of assistant coaches and administrators who report, directly or indirectly, to them.

Lupoi did not return phone calls seeking interview requests for this story. Informed by text message that there were allegations he delivered cash on at least two occasions to a go-between to reimburse expenses for tutoring and online classes for Basham, Lupoi said in a text, “Well that’s certainly false. I deny such allegations of violating NCAA rules w/ the recruitment of Andrew Basham.”

Lupoi, who played football at California from 2000 to 2005, joined Sarkisian’s Washington staff in 2012 after serving as Cal’s defensive line coach for four seasons and gaining a reputation as an effective recruiter.

David Roberts, USC’s vice president for athletic compliance, said Lupoi was among the coaches Sarkisian listed as possible candidates to become Trojans assistants, and that all proposed candidates were vetted. USC’s compliance office began investigating Lupoi last week after receiving a tip from someone who said Davis had been the middleman in a transaction between Lupoi and a recruit. The Times received a similar tip.

Roberts contacted Davis on Friday. After speaking with him and also with Sarkisian, Roberts said USC found no evidence that Sarkisian knew about the alleged activity. “We don’t have concerns about Steve’s involvement,” Roberts said.

Sarkisian said he first learned of the situation when contacted by USC’s compliance office. “When I was at Washington I did everything within my power to make sure we were 100 percent compliant in all NCAA and Pac-12 rules, and I’m going to operate the exact same way here at USC,” Sarkisian said.

Sarkisian has hired three former Washington assistants — Johnny Nansen, Keith Heyward and Peter Sirmon — but is still in the process of assembling his USC staff.

A USC person with knowledge of the process said Lupoi’s chance of being hired by USC was now “less than zero.” The person was not authorized to speak publicly about the situation and requested anonymity.

Lupoi is part of Washington’s interim staff that is preparing for a Dec. 27 game against Brigham Young in the Fight Hunger Bowl. New Washington coach Chris Petersen, who replaced Sarkisian but is not coaching the bowl game, has not announced the staff he will move forward with.

Shondell Reed, a senior associate athletic director at Washington who oversees compliance, said Lupoi informed him last Friday that the Times was about to publish an article about allegations regarding Basham’s recruitment. Reed then alerted the Pac-12 Conference office and was told that USC had received a tip and was investigating.

In a phone interview, Reed said that he did not know the specifics of the allegations but that Lupoi “denies any wrongdoing or violations of NCAA rules. He said he doesn’t know why he would be accused of this and vehemently denies doing anything wrong.”

Davis and his wife, Heidi, have been contacted by Washington’s compliance office and he said he is scheduled to meet with officials from Washington and USC in Seattle on Friday.

Basham did not respond to phone calls or texts seeking comment about his recruitment, and several attempts to visit him at his home in Bothell, Wash., were unsuccessful.

Basham orally committed to Washington in June 2012 and signed a national letter of intent with the Huskies on Feb. 6. Sarkisian held a news conference that day to discuss the Huskies’ recruiting class and each player.

Sarkisian noted Basham’s size — 6 feet 4, 305 pounds — and how the defensive lineman played, at times, as a middle linebacker. “He’s that good of an athlete,” Sarkisian said. “He’s got a nasty streak to him. It was unique, it was great for us to get a local kid with these talents here.”

Davis, 57, met and became close to Basham in 2012 when Davis became an assistant track and field coach at Lynnwood High, which is about 20 miles north of downtown Seattle.

Davis said Lupoi spoke with him about Basham’s academic situation during an open track meet at Washington’s Dempsey Indoor Center on Feb. 10, 2013. Davis said a relative of his who worked for Kaplan Inc., which provides tutoring for SAT and ACT testing among other services, was at the meet and shared with him and Lupoi that group classes were available for all students.

Davis said he contacted Kaplan and was given a range of costs for private tutoring, including a package for about $3,000.

On Feb. 25, Davis said, Lupoi called him and suggested they meet for a meal at the Ram Restaurant & Brewery at the Northgate Mall in Seattle. During the meeting, Davis said that he got up from the table to go to the restroom and that Lupoi followed.

When he returned to the booth, Davis said he found a brown paper bag tucked into the booth. He said they talked about football and Basham and then shook hands and left.

Davis said he did not look in the bag, but when he returned home his stepdaughter Brooke opened it and counted $3,000 in $100 bills.

Davis, his wife and his two stepdaughters said Basham met with a Kaplan tutor for sessions at their home during the spring.

Davis said Lupoi also provided him with a list of several online schools and courses Basham could take to improve his grade-point average. Lupoi recommended Laurel Springs School and said he would cover the cost, Davis said.

Davis said that he contacted Laurel Springs but that he also told Lupoi he did not have money to pay for the classes, which would cost about $1,700.

Davis said that Basham’s father, Ron, agreed to use a credit card and that Davis signed up Basham using the card number. Davis said Ron Basham called him about a week later asking for money to cover the charge. Davis then contacted Lupoi and told him the situation needed to be resolved.

On May 18, after attending the 1A Tri-District track meet at King’s High in Seattle, Davis said he, his wife and Andrew Basham were dining when Lupoi phoned and invited them to the Washington football complex.

“When I picked it up he kind of smiles,” Davis said.

The men returned to Lupoi’s office, Davis said, and then the group went downstairs to a weight room where Lupoi weighed Basham, measured his hands and continued talking. When the group went to their car to leave, Davis said he opened the cup and found $1,500. He got in the driver’s seat and Andrew sat in the front passenger seat. Davis’ wife sat in the back and Davis handed her the coffee cup. Heidi Monroe-Davis said she opened the lid and saw the money.

They then drove to Basham’s father’s auto repair shop and gave him the cup with the money inside. “He looked in the cup and said, ‘Oh, that’s a good cup of coffee,’ ” Davis said.

Last Thursday, when a reporter approached Ron Basham at his shop, he said he charged the cost of the online course to another relative’s credit card. Asked if Washington had reimbursed him for the cost, he said no. Asked if Davis had delivered $1,500 to reimburse him for the online tuition, he said, “No comment. I know nothing.”

After Andrew Basham fell short of academically qualifying for Washington, Davis said he left messages for Lupoi, asking if the Huskies would still be interested if the player attended a community college and worked hard to raise his grade-point average. Those calls, Davis said, went unreturned.

“I’m disappointed in Lupoi,” Davis said. “You take a kid and build him up. He doesn’t make it and you leave him out to dry.”

Davis was set to become the throwing coach at Everett Community College for the 2013-14 school year before the Times left a message with the school’s head track and field coach on Dec. 6, asking to speak with Davis.

After he subsequently informed the head coach and the athletic director about his role and Lupoi’s payments, Davis said he was told that his job might be in jeopardy because of his admission.

He also said he contacted the NCAA and then phoned Lupoi to inform him of the Times’ inquiry.

Davis said he was angry that Lupoi has feigned not being involved during recent phone conversations and text-message exchanges. Davis also said that he laments his part in the situation, and that he should have steered Basham to a community college.

“I was in the middle of trying to help Andrew,” he said. “It was probably not the right thing to do. I really like the kid. I was just trying to give him some help.”