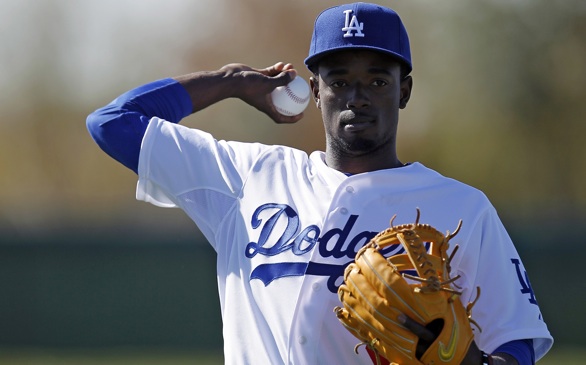 Dee Gordon was once regarded as the Dodgers' shortstop of the future. Now 25, he is uncertain of how he figures into the team's plans as he prepares for spring training.

Gordon spoke by phone Tuesday from his home state of Florida, where he is working out under the watch of with his father, former major league pitcher Tom Gordon, and Hall of Fame shortstop Barry Larkin.

Gordon is taking grounders at shortstop and second base, to where the Dodgers moved him last season. He is also taking fly balls in center field, which is where he played last month for Tigres del Licey in the Dominican winter league.

The fleet-footed base-stealing threat said his venture into the outfield went well. While in the Dominican Republic, he was visited by Dodgers minor league outfield coordinator Damon Mashore, who offered him a crash course on his new position.

Gordon laughed and recalled how he was immediately tested. He said that in the first game he played, the second batter of the first inning hit a ball to the wall in right-center field.

But the Dodgers have a crowded outfield. Either Matt Kemp or Andre Ethier will start in center field. The one who doesn't start will compete for playing time in the corner positions with Yasiel Puig and Carl Crawford.

Gordon's best chance to make the opening-day roster could be as a utilityman. Gordon said he's open to that.

As Gordon was contemplating his future and reflecting on his past, he found time to do some extended Christmas shopping Tuesday. Gordon will be donating $3,000 worth of toys to the Boys And Girls Club of Highlands County, where he played basketball and football after school as a child. McDavid USA, which provides Gordon with the protective sleeves and pads he wears in games, will provide athletic apparel valued at $1,500.

The idea started with Gordon's father, who wanted to donate Gordon's old shoes.

"What if the kids don't wear my shoe size?" Gordon said.

Gordon said his father has also been the inspiration for what he hopes will result in a new approach at the plate.

Gordon hit well in the Dominican Republic, batting .348 in 12 games.

Gordon insisted he has grown as a player and as person over the last two years, during which he went from an opening-day shortstop to an afterthought in the wake of the Dodgers' acquisition of Hanley Ramirez in the middle of the 2012 season.

"I've been at the top of the top and the bottom of the bottom," Gordon said.