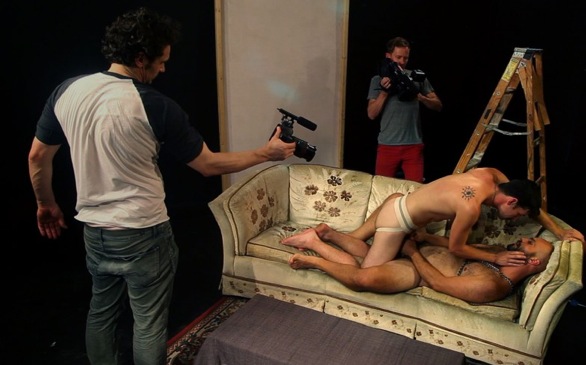 Interior. Leather Bar. is a documentary-style film based on the 1980’s movie, Cruising. Cruising follows a police detective – played by Al Pacino – who immerses himself in the underground gay culture in order to catch a serial killer who is supposedly murdering homosexual men by using S&M strategies.

This new film, directed by legendary actor-director James Franco and his close companion Travis Mathews, recreates the 40 explicit minutes that were cut from the original film, as they were considered too raunchy and overtly sexual for the big screen during that time period.

During the production of the 2013 remake, Franco and Mathews’ main goal was to broaden audiences’ minds as well as encourage artistic expression, no matter how extreme and “out there” one’s ideas may be.

However, many people, including some of the film’s actors, didn’t encourage Mathews and Franco’s vulgar re-creation, as they were convinced that viewers would be appalled and disturbed by the sexual explicitness.

Throughout the hour-long documentary, James Franco and the actor playing Al Pacino, Val Lauren, talk about the positive message Franco desires to spread, but Lauren is convinced this “message” will be perceived in a completely different way.

Aside from the various interviews and typical shots of camera, sound and lighting equipment, much of the documentary consists of naked men performing oral sex on each other and engaging in sadomasochism. Personally, I’m all for artistic expression. I do read 50 Shades of Grey, so I’m able to understand these S&M tendencies, but having to stare at genitalia and leather whips for minutes at a time made me slightly uncomfortable.

Franco tells the camera he "doesn't like realizing that [his] mind has been twisted by the world around [him]” and expresses his distaste for the typical American love story, which normally consists of a man and a woman meeting one minute and living happily ever after the next. Although he makes a point, this documentary doesn't make his outlooks palpable, mainly because the film focuses too intensely on hardcore sex rather than the message Franco is attempting to portray.

Interior. Leather Bar. definitely crosses the line between being artistically expressive and pornographic, and this is undeniably the reason why the 40 minutes were banned back in the '80s. It is almost as though the film shows too much without saying enough.

Let’s take a break from the film’s “message” for a moment and take a look at its cinematography. Yes, it’s a documentary, therefore there will be multiple movements, episodic cuts, panning and zooming throughout, but all of these necessary aspects are a bit too over-exaggerated. The actual filming is too quick and chaotic to the point that audiences will find a hard time staying engaged – or even wanting to. The emphasis seems to be more on the visual shock value rather than the actual story, thus taking away from the beauty Interior. Leather Bar's. message could potentially portray.

No matter the time period, I truly believe some things – including certain body parts – are sacred and not meant to be shown in theaters. This doesn’t mean I don’t agree with Franco’s viewpoints, as I too am all for creativity when it comes to filmmaking, but there comes a time when some things should be kept to one’s self. And to make this clear, whether this documentary had been based on homosexual underground clubs or heterosexual ones, I would’ve had the same reaction and attitude towards it.

Nonetheless, I can wholeheartedly say that I appreciate Franco’s efforts and admire him for taking this precarious step, as he has encouraged me – and hopefully others – to always follow my heart when making decisions, no matter what anyone else says about them.

Interior.  Leather Bar. opens Thursday, Jan. 2, 2014 in Los Angeles at The Cinefamily with an appearance and Q&A with James Franco.