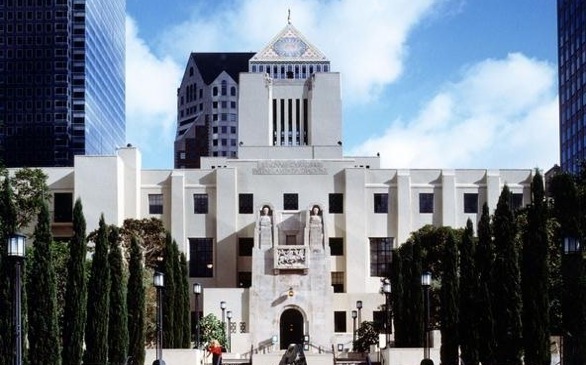 Some of the patrons who entered the Pacoima Branch Library one recent day found answers to questions they didn’t expect to have, until they were asked if they had health care coverage.

As it turned out, whether to enroll in a health insurance plan or not remains a big question on the minds of college students who use the library to study, or seniors who come in to read magazines, or dads who accompany daughters looking for the latest books on teen love.

That’s why Rosa Olaiz and Victoria Mercel, two health promoters who operate a Covered California booth at the entrance of the library, have come to help.

“I’ve got a kid who’s older, who doesn’t have a job. Does she still have to make the payments?” asked one man.

“Tell her to come tomorrow and see if she qualifies for Medi-Cal,” Olaiz responded. “We’ll have an enrollment specialist here.”

“My daughter is on Medi-Cal. She’s disabled. Is there anything more she has to do?” asked a woman.

As the first deadline to enroll into health care approaches on Monday, state officials and local nonprofits hope people will turn to the one place they have always looked to for answers: public libraries.

As a result, Los Angeles launched “Health Matters,” a program at all 73 city libraries where the public can attend workshops or receive enrollment assistance into health care plans as part of the provisions in the Affordable Care Act. Those who want coverage by Jan. 1 and who want to avoid an income tax penalty of $95, need to apply by Monday. However, enrollment will continue until March for those who missed the first deadline.

“We’ve been working with nonprofits and Covered California so that people can come to us with questions,” said Melissa Potter, director of adult services at the Los Angeles Public Library. “Most of the questions we hear is what is (the Affordable Care Act) or how do I get to the website? Insurance is such a complicated thing, and people come to the library when they want a general view of anything. We’re used to giving a general overview of things.”

While librarians at all branches have been to trained to help people access information some branches are hosting pilot programs aimed at Chinese- and Spanish-speaking patrons.

During a press conference last week, Covered California executive director Peter Lee said only 5 percent of those who speak Spanish have enrolled since Oct. 1.

Lee said during a teleconference Thursday that the state would spend more on marketing toward the Latino community, which makes up 60 percent of all uninsured Californians. Not all qualify to enroll into health care plans under the Affordable Care Act because of their legal status. But Lee said more research is needed to understand why so few of those who do qualify have signed up. Some have said the lack of applications in Spanish, which were approved only this week by the federal government, as well as confusion between the state market exchange and the federal one, may have contributed to the hesitation.

“We have expanded our marketing,” Lee said. “We have doubled our spending specifically targeting Los Angeles and the Latino community.”

Both the Chinatown and Pacoima library branches, for example, have health promoters from Asian Americans Advancing Justice-Los Angeles and Visíon y Compromiso, supported in part by a grant from the nonprofit UniHealth Foundation

“We are trying to be a center for the community, not just a place to get books,” said Laura Contin, manager at the Pacoima Library. “This community is very family-oriented. Word of mouth is strong.”

In addition, workers with the Los Angeles County Department of Public Social Services will be at the Pacoima Branch Library on Monday to help enroll those who may qualify for Medi-Cal.

“Based on prior experience during the last census count, we had a strategy to engage libraries, and it was wildly successful,” said Beatriz Solis, director of healthy communities, Southern Region for the California Endowment. The Endowment is funding the “Health Matters” at the libraries.

She said there may be various reasons why some communities have hesitated to enroll through Covered California.

“People may not have access to technology,” she said. “There is linguistic diversity, fear of government, implications of sharing data, which all create a sense of worry. What we have found is librarians are trusted agents of the community. People know them because their kids go there. Librarians are just natural leaders.”