Rose Bowl: No. 4 Michigan St. Won’t Give an Inch, Beats No. 5 Stanford 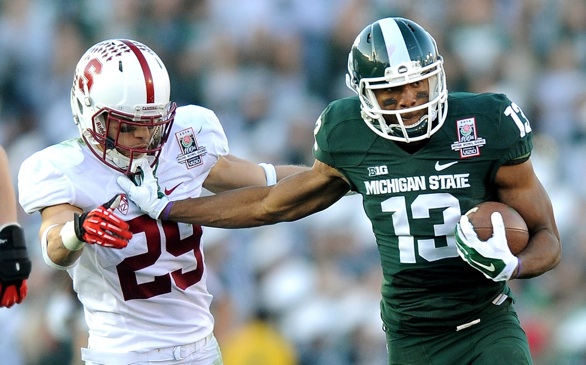 PASADENA, Calif. — The 100th Rose Bowl came down to a fourth down and the most predictable play call in Pasadena on Jan. 1 since they resumed football in 1916 after years of chariot and ostrich races.

“Everyone in the building knew it was coming,” Stanford tailback Tyler Gaffney said.

Two bullheaded teams that refused to give an inch put everything on the line over 12 inches of territory at the Stanford 34-yard line in the Rose Bowl’s north end.

Stanford rolled out its “elephant” backfield package and Michigan State’s defense rolled up its green sleeves.

Kevin Hogan handed off to fullback Ryan Hewitt just as Michigan State linebacker Kyler Elsworth dived over the top to meet him somewhere in mayhem.

After they cleared away bodies and the referees reviewed the mark, it was determined the Big Ten had held this precious line, with 1 minute, 43 seconds to play.

The play of the game was made by a backup linebacker in the game only because star Max Bullough had been suspended for a violation of team rules.

Elsworth guessed Hewitt was going to get the handoff and literally threw himself at the fullback.

“You’re saying, ‘Man, I hope he hands this ball off or I’m tackling nobody,’” Elsworth, still fully dressed in his No. 41 uniform, said in a joyous locker room.

Elsworth, a senior, in his last game, may have worn his uniform back to East Lansing.

“This is the way everyone wants to end his career,” he said.

Michigan State claimed a Rose Bowl victory 26 years after its last appearance in 1988, when it beat the University of Southern California.

Spartans fans flowed out of the Rose Bowl like a spilled can of green paint. They stood outside the stadium’s outer shell and clicked cellphone pictures of memories they won’t forget.

One said winning the Rose Bowl was better than winning the NCAA title in basketball (sorry, Magic Johnson).

There were spontaneous outbursts of delirium.

“We won the 100th Rose Bowl!” one Spartans fan said to no one in particular.

Michigan State’s locker room had the feel of Mardi Gras as players pranced, to loud thumping music, in various states of dress.

The game was the throwback-to-another-era scrum that everyone, including the vendors, saw coming.

Shilique Calhoun, an end for Michigan State’s No. 1-ranked defense, hoped the game would come down to his side.

It was an exhilarating victory for Michigan State and for the Big Ten, which needed a jolt like this for its reputation.

Michigan State finished 13-1, only a four-point loss to Notre Dame from being undefeated.

Stanford will long lament the missed opportunities and another close defeat. The Cardinal finished 11-3, the three losses coming by 13 total points.

The Cardinal was leading, 10-0, late in the first quarter when linebacker Kevin Anderson allowed what appeared to be a sure interception slip through his hands. Worse for him, the ball was caught by Michigan State receiver Macgarrett Kings Jr. for a first down. The Spartans extended the drive and scored on a two-yard run by Jeremy Langford to make it 10-7.

Anderson redeemed himself by stepping in front of another Connor Cook pass and returning it 40 yards for a touchdown 2:07 before halftime.

Cook, showing remarkable resilience after his gaffe, marched his team 75 yards in 99 seconds and closed the gap to three again on a two-yard pass to Trevon Pendleton with 28 seconds left.

It would start a run of 17 unanswered points. The Spartans tied the score on Michael Geiger’s 31-yard field goal early in the third quarter and took the lead, 24-17, on a 25-yard scoring strike from Cook to Tony Lippett with 13:22 left in the game.

Stanford lost momentum as it refused to stray from its script, relentlessly trying to force its running game on Michigan State’s top-ranked rushing defense.

Stanford managed 162 yards in 36 tries, but 74 of those came on two plays — a 47-yard Gaffney run and 27 more by receiver Michael Rector.

Take away Gaffney’s best run and he finished with 44 yards in 23 carries.

“Everywhere I looked there were green defenders,” Gaffney said afterward.

Stanford Coach David Shaw was left again to defend his conservative play calling. It has served the Cardinal well in winning consecutive Pac 12 titles, but it has also cost his team in crucial situations.

“I’m going to put the ball in the hands of our guys and put it on the offensive line,” Shaw, once again, explained.

Stanford scored only three second-half points, on Jordan Williamson’s 39-yard field goal, but did get the ball back with a chance to win.

Three plays later it was fourth and one, with the season connected to three feet of grass. Stanford called time out and came out in its “jumbo” formation, a clear signal it was going to be a run.

Michigan State countered with its own timeout as defensive coordinator Pat Narduzzi reset his unit with what he later called the “Spartan” formation.

It was the ending both sides wanted.

“Fourth and one is what we preach on,” Gaffney said. “It’s what Stanford football is all about.”

Hewitt got the ball, though, not Gaffney, and Elsworth guessed right.

Afterward he thanked Bullough, the man he replaced, for getting him ready for the situation. He calls Bullough “the computer” for all the knowledge he has stored.

“I’ve been preparing for this opportunity for five years,” Elsworth said.

Push met shove at the 100th Rose Bowl and it wasn’t just any old test.

“It was a test of wills,” Gaffney said. “They got the better of us.”