P.O.D.: Stays True to its Roots With Testify 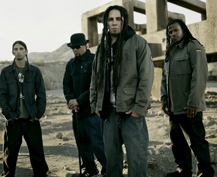 Sonny Sandoval of P.O.D. isn’t afraid to admit that his band rocks in the name of Jesus Christ.

"[Being Christian] is just something we are. I never said ‘Dude, we’re Christian’ … we never knew what Christian music was," the dread-headed frontman says. "It was never really an issue. We just thought music is about thinking what you want and speaking what you want."

It was 1992 when drummer Wuv Bernardo and guitarist Marcos Curiel began cranking out thrash metal songs together in San Diego. The pair decided to switch things up and adopt a hip-hop and rock vibe based on their other musical influences. At the same time, Sandoval’s mother passed away due to cancer, so to take his mind off of things, he joined Bernardo (his cousin) and Curiel. The band’s lineup was finalized when Traa Daniels, a friend of Sandoval’s uncle, replaced Gabe Portillo, the band’s original bassist, in the mid ‘90s.

Although he grew up on a steady diet of AC/DC and Led Zeppelin, Sandoval became a fan of reggae and hip hop as he got older, but the aggression of live rock shows was what truly helped form his own musical style. From those roots, P.O.D. created its own style, unique at a time when the musical soundscape was littered with Nirvana wannabes and punk/pop-punk bands.

A few stints at the Whisky-A-Go Go, jaunts in Phoenix and other smaller venues outside of San Diego spread the band’s name around. People in their hometown thought they had broken up but really, they were touring relentlessly in their small, broken down van.

"We were playing the local clubs, the keg parties and the bars," Sandoval says of P.O.D.’s earlier days. "[When people found out we were Christian] that’s when we really started playing youth rallies or boys and girls type things, more positive things. I think the first time we played at church … they stopped us after the first song because they thought we were too evil I guess."

The church was wrong. In fact, P.O.D. (an acronym for Payable on Death) is quite the opposite. Sandoval’s mix of encouragement and personal struggle has ignited praise from both fans and critics alike, creating a beacon of lyrical light for people to look toward in an otherwise dark, uninspired genre.

Sure, the songs follow the "nu-metal" pattern, drawing generalizations from those who look down upon the style, but as one of the few bands that survived the genre’s explosion in the late ‘90s (Limp Bizkit, who?), P.O.D. has earned its keep.

"[In the early ‘90s] people were comparing us to Suicidal Tendencies or Body Count just because they had that ethnic influence. When Rage Against the Machine came out, it was like ‘Oh, dude you guys sound like them’ … back then they were calling it Rapcore. Now it’s like, you call it what you want, it’s all rock ‘n’ roll to me," Sandoval says.

Since its platinum-selling debut, 1999’s The Fundamental Elements of Southtown, P.O.D. has found multi-platinum success spreading their God-meets-the-mosh-pit gospel. Hit singles like "Will You," "Alive" and "Youth of the Nation" were rock radio staples when they hit the airwaves.

After the band’s third album, Payable on Death, the band departed with one of its founding members. Sandoval says Curiel wanted P.O.D. to stay on hiatus so the guitarist would have time to work with his other band, The Accident Experiment. The singer says the other members couldn’t wait because they were slated to record a song for The Matrix Reloaded and start work on a new studio album. Stories vary on whether the split was amicable or not, but in the end, Jason Truby, a former guitarist for the now defunct Christian metal band Living Sacrifice, was brought in as Curiel’s replacement.

In gearing up for the sessions that would produce 2006’s Testify, the band took a bit more time compared to its previous efforts.

"It’s the longest that we’ve ever taken to write a record. At the same time, we kept it fun … we rented a place out in Palm Springs and moved all our stuff in, set up our equipment and got away from everyday life," Sandoval says of the writing and recording process.

The band hooked up with Greg Fiddleman, the right-hand man to mastermind producer Rick Rubin, and worked over original ideas with him. In the end, however, P.O.D. decided to move in another direction. They chose to have producer Glen Ballard (Alanis Morrisette) help polish off the tracks that were already 95 percent completed.

One of the songs that came together when Ballard joined the team was a collaboration with up-and-coming Jewish reggae artist Matisyahu.

"I had known about his stuff for a minute and I really respected his faith and his beliefs. At the time, nobody knew about him, but a buddy of mine got a hold of him through the streets … we were hoping to get somebody like Damian Marley to mess with ["Roots In Stereo"], but when we got to the studio, [Matisyahu] was already there and Glen had let him hear the tapes," Sandoval says of the pairing. "We just thought it was cool, you know, these known Christians to sit with this Hasidic cat and then do some reggae stuff together."

In its entirety, Testify stays true to the bands proven formula. Throw in a couple of thrashers ("Roots In Stereo," "On the Grind") that get the party started and separate them with a couple of songs will get listeners thinking ("If You Could See Me Now," "Goodbye for Now").

"Those aren’t heavy songs, they’re more like vibe tracks," Sandoval says of the albums’ mellow side. "Lyrically, they really hit the heart. ‘Goodbye for Now’ is a song of hope, struggle and a better tomorrow. ‘If You Could See Me Now’ is like ‘Yeah, I hope that in the end you are proud of me.’"

In an industry where even M.C. Hammer sold his family-friendly image for a shot at being "Gangsta," it’s refreshing to see artists trying to change the stereotypes of a band’s self-indulgent quest for money and women. Interspersed throughout the album is a message P.O.D. has stayed true to since its inception.

"Being a man of faith and a man that loves his family, loves God and loves his community, we’re always trying to tell people to hold on," Sandoval says. "… If you can make it one more day, we believe there is a promise and that tomorrow is going to be better."

Testify is currently available. For more information, visit www.payableondeath.com.
Article posted on 1/23/2006
This article has been viewed 2988 times.