Look Out for Colorado in Pac-12 Men's Basketball 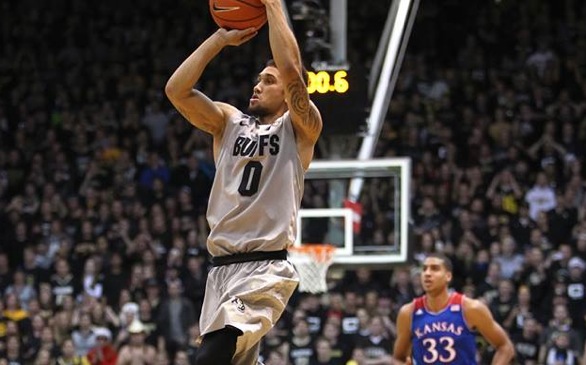 Time to round up the usual Pac-12 Conference suspects as well as those who may be suspect.

Arizona enters conference play ranked No. 1 in the nation, taking its familiar role as Pac-12 behemoth.

UCLA has old-school tradition and was the 2013 regular-season champion but has played a junior varsity nonconference schedule.

Oregon won the Pac-12 tournament last season and is ranked 10th, getting as much out of Phil Knight's Nike money as the Ducks' football team.

Then there is Colorado. Once again the Buffaloes appear to be a player in the conference basketball race.

Pac-12 play begins Thursday, though UCLA and USC will wait until Sunday to open against each other at Pauley Pavilion.

It's hard to ignore Colorado, which comes in as one of the top-tier teams. The Buffaloes are 11-2 and ranked 20th.

"We just want our program to get better," Coach Tad Boyle said.

It has. It's just that no one expected them to start near the top when they rolled into the Pac-12 in 2011.

The working theory when the conference expanded two years ago was that the Buffaloes' football team would eventually become a power. Basketball was along for the ride.

No one knew that things were beginning to Boyle in Boulder.

Colorado had been to the NCAA tournament twice from 1969 to 2011. Boyle, now in his fourth season, took the Buffaloes to the tournament the last two seasons, winning the Pac-12 tournament in 2012 and getting an at-large bid last season.

This season the Buffaloes walk into conference play with credibility and a record that includes a victory over No. 16 Kansas and a down-to-the-wire loss to No. 6 Oklahoma State.

That has been accomplished with a starting lineup that has no seniors. Colorado starts two juniors, two sophomores and one freshman.

"I think we weren't on a lot of people's radar when we joined the Pac-12," Boyle said.

Those people may need better radar. The Buffaloes finished 24-14 and reached the NIT semifinals in 2010-11. They finished fifth in their inaugural Pac-12 season and rolled through the conference tournament.

"Winning four games in four nights opened some eyes, and you can include Colorado fans in that bunch," Boyle said. "It's not like our fans expect us to go to Los Angeles and win. It was a defining moment."

Boyle has created an upheaval as a local boy come home. He was the Colorado player of the year at Greeley Central High in 1981 but chose Kansas after Colorado changed coaches.

He played four seasons for the Jayhawks, but eventually found his way home. Boyle was hired at Northern Colorado. His teams went from 4-24 in 2006-07 to 25-8 in 2009-10. He took over in Boulder after that season, and stresses to recruits that he is staying.

"I would have never gone to Kansas if Colorado hadn't changed coaches," Boyle said. "It's important that people know I'm a Colorado guy."

Staying one is easier since joining the Pac-12, which has opened up the Southern California market. Boyle has already lured to Colorado guard Askia Booker from Los Angeles Price and Xavier Johnson from Santa Ana Mater Dei.

"If kids don't stay home for school, they want to come back home to play," Boyle said. "We can offer that."

So far, he can also offer success.

"We have been in the top half of the Pac-12 since I have been around," Boyle said. "Now the challenge is to stay there."

The conference appears stronger than in recent seasons, with Arizona (14-0) perched at the top. The Wildcats have victories over Duke and Michigan on their resume.

Last season, Arizona was 12-0 before Pac-12 play, beating Florida and Miami, but finished in a four-way tie for second place with a 12-6 conference record. The more-seasoned Wildcats have size and depth.

"We have a number of players who went through that experience last year, who are much more prepared and understand how difficult it is to win in the conference," Coach Sean Miller said.

A conference, Miller said, that has "anywhere between five to seven teams who I'm sure right now are talking about making the NCAA tournament."

Oregon reached the Sweet 16 last season but lost key members from that team. Still, the Ducks enter conference play with a 12-0 record.

"I didn't know how we were going to blend together with a lot of new guys," Coach Dana Altman said. "We've blended together well."

UCLA is expected to toughen up its nonconference schedule in 2014-15. This season, the Bruins are 10-0 against mid-major teams, some of which were poor mid-major teams. They are 2-2 against teams from power conferences, with the victories against Alabama and Northwestern.