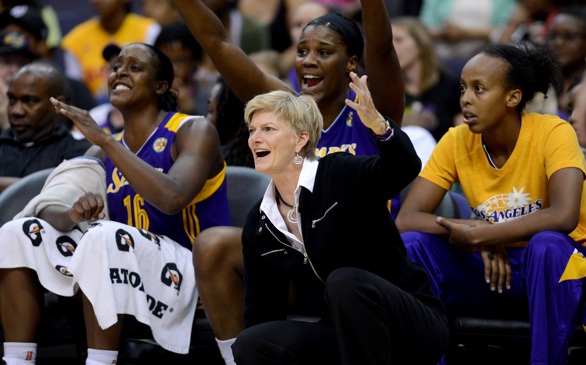 The WNBA is searching for a new Sparks owner after Sparks Chairman Paula Madison told the league her family-owned company would no longer be involved with the team, The Times has learned.

“This was a big surprise to us,” WNBA President Laurel Richie said Thursday. “Right before the holidays, I got a call from Paula letting me know that she and her family were no longer in a position to continue with the Sparks.”

The WNBA is not taking over control of the Sparks, however.

Asked if the Sparks would field a team for the 2014 season, or if the franchise would fold, Richie repeatedly said that several entities have expressed an interest in owning a WNBA team and the league is exploring those options regarding the Sparks.

The Sparks’ front-office staff, including General Manager Penny Toler and President Vincent Malcolm, have been laid off. Sparks Coach Carol Ross and her staff have also lost their jobs.

The Times obtained a copy of an email that was sent by Malcolm to team employees on Tuesday: “… we regret to inform you that effective December 31, 2013 you no longer will be employed by the Los Angeles Sparks.”

The players, however, have gotten paid and their benefits will continue, according to a WNBA spokesman.

Calls to Sparks minority owner Kathy Goodman and Ross for comment were not immediately returned.

The Sparks are one of the WNBA's original teams and won championships in 2001 and 2002. The late Lakers owner Jerry Buss sold the Sparks in 2006 to an investment group led by Goodman, a former film executive, and attorney Carla Christofferson.

The WNBA started out with eight teams in 1997 and grew to 16 before several franchises folded — it now fields 12 teams, including the Sparks.

The league has been dogged by financial concerns for years.

In 2012 the WNBA’s average attendance fell to a record low of 7,457, according to SportsBusiness Daily. In 2013 the league said its overall attendance rose by 1%.

Richie said the Sparks’ problems do not reflect on the financial health of the rest of the teams in the league.

“This is an issue for a particular ownership group,” Richie said. “We are very respectful of that and we are knee deep in exploring what this means for us and what our plan is going forward.”

FOR THE RECORD: An earlier version of this story stated the WNBA has taken over control of the franchise, but it has only assumed control of the search for a new owner. Also, Richie said earlier she was unsure if Sparks players were being paid. A league spokesperson says they are.