Dine Like Lord and Lady Grantham at Your own ‘Downton Abbey’ 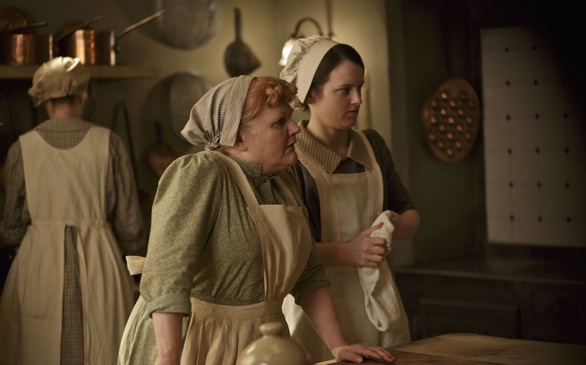 Can you cook up a meal like Mrs. Patmore and Daisy?
(Credit: Nick Briggs/Carnival Film and Television Limited 2013 for MASTERPIECE/MCT)

If only we all had Mrs. Patmore and Daisy in our kitchens to crack the eggs, bake the bread and serve us a perfectly prepared meal on a silver platter.

Think how deliciously spoiled we would be, dining like the Crawley family on fine French cuisine served by a staff dressed to the nines in white tie and tails.

For fans of “Downton Abbey,” it’s time to indulge in that dream again when the show debuts its fourth season at Sunday on PBS.

For those who don’t watch the English period drama: It chronicles the life of a British aristocratic family, the Crawleys, who live in the fictional Downton Abbey in the early 1900s, complete with a household staff of cooks, footmen, ladies’ maids and butlers.

The lavish home, period clothes and dining tables laden with sumptuous foods have sparked a new interest in the lifestyle of Edwardian-era England. The show has inspired a line of wines, English teas, several cookbooks and a few blogs for those who want to capture some of the Downton spirit at home.

By day, Pamela Foster is a marketing director for a large Toronto law firm, but in her spare time, Foster authors the blog http://downtonabbeycooks.wordpress.com.

Foster said she and her husband became hooked on “Downton” in part because his family line traces back to a similar noble class in England. “We were watching a show that would have exemplified his family. … Mine would have been the downstairs servants,” Foster said.

An amateur culinary historian, Foster saw the food on the show and thought it would be enjoyable to explore and write about it. She began writing about dishes on the show and then used food as a way to study further the history of the day.

“It (the blog) really got into connecting people with food and cooking and understanding what meals were served,” Foster said.

So, what would the Crawleys be eating? Everything, according to Foster.

Most of their food would have been grown on their estate, in their gardens and orchards. Their livestock would have been raised on the estate, which also would have produced their milk and eggs, among other foods.

But because of the size and breadth of the British Empire at the time, the family would have had the best of imported foods from all over the world as well — spices from India, tropical foods from Africa and the Caribbean.

The cooking, however, would have been decidedly French.

The foods that we think of as classically British — stews, meat pies and other hearty pub fare — would have been reserved for feeding the servants, Foster said.

A family like the Crawleys would likely have eaten four times a day: breakfast, lunch, tea and dinner. The dinners would have been formal, multi-course affairs, but the portions small.

Thomas said he learned a lot about food of the Edwardian era, and used some Downton-inspired cookbooks as guides.

“The cuisine was mostly French because that was the standard at the time and they ate well,” he said.

The food, he said, was lavish — big roasts, game or birds such as pheasant, quail, duck or goose. The presentation, however, was not. No large presentations were made at the table. Rather, all of the carving was done downstairs and the foods were presented on silver platters by servants.

“Everything was served to you. Nothing was sliced at the table, it was all done in the kitchen,” he said.

The cooking would have used a lot of animal fat, such as lard and rendered duck fat. It also was heavy with rich sauces.

A soup course and fish course followed, before the main entree of meat or fowl. “They ate a lot more kinds of birds for sure — partridge and pheasant. The cuts of beef were pretty much the same and a lot of the fishes were the same. We have more fishes available to us these days. They would have eaten a lot of cod or Dover sole,” Thomas said.

For viewers who may want to host a Downton-inspired dinner party, Thomas said it doesn’t have to be a formal sit-down affair.

Anyone who watches the show knows Violet Crawley, Dowager Countess of Grantham, played by Maggie Smith, gets in some of her best lines over tea.

Hosting a tea, with some savory hors d’oeuvres and tea sandwiches, scones with clotted cream and fruit preserves, and petite sweets, would be easy fare to serve at a Downton party, Thomas said.

Here are some recipes for inspiration:

Cut the salmon into very thin slices — allow one small slice per person. On each slice, place 1 teaspoon caviare and roll up the slice. Place in an hors d’oeuvres dish and sprinkle with a few drops of tarragon vinegar. Garnish with the gherkins, chervil and slices of lemon; serve with thin slices of brown bread and butter and black pepper.

Mince the chicken and ham, put it into a mortar with all the other ingredients and pound until it is the consistency of paste. Spread this mixture on rounds of fried bread, one per person. Put in a hot oven for a few minutes before serving. Garnish with chopped parsley.

NOTE: Anchovy essence is a condiment made with anchovies, vinegar and spices. Replace it with the readily available Worcestershire sauce.

1 ½ oz. butter, plus extra for finishing

Whiz the soup in a blender. The mixture should not be too smooth. Adjust the seasoning, heat and add a little more butter and the parsley.

In small saucepan, melt butter over medium heat, add onion and saute until softened. Increase the heat to medium-high and stir in brown sugar, salt and pepper. Cook for another 5 minutes, stirring frequently until onions are well browned. Sprinkle with flour and cook until blended.

Preheat oven to 400 degrees and grease a baking sheet.

Place the fillets on the baking sheet. Combine the mayonnaise and mustard and spread over the fish. Stir together bread crumbs, parsley, and Parmesan; sprinkle over fillets.

Transfer to heated platter and sprinkle with chives. Serve with lemon wedges and sharp sauce on the side.

Looking for inspiration for hosting a Downton party? Check out these cookbooks:

— “Recipes from an Edwardian Country House” by Jane Fearneley-Whittingstall ($16, softcover, Simon and Schuster)

Special Features
Southern California has given the world so much. And fast food too
1,256 views