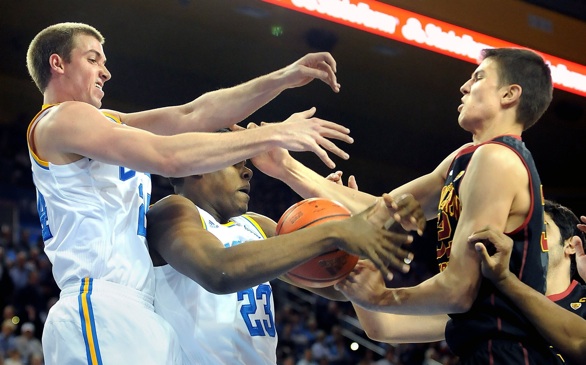 n his first game against crosstown rival UCLA, new USC men's basketball Coach Andy Enfield had a quick and easy answer for any positives he might have located in the Trojans' 107-73 loss to the Bruins.

"UCLA shot the ball really well and that seemed to rattle us," Enfield said, speaking in a closet-sized room filled with mops and buckets stuffed with volleyball nets.

"Is this the media room?" Enfield asked. It is for teams that lose by 34 points.

Omar Oraby is not a factor

USC's 7-foot-2 center Omar Oraby went out early because of a possible sprained ankle. He came back but was always in foul trouble and was never a factor, fouling out with eight points and no rebounds in 14 minutes.

"Omar's a big part of our team," Enfield said, "and I thought he was one advantage we might have because he is bigger and has good footwork and can score in the low post.

"But with him being hurt, out of the game for a while and then in foul trouble, that kind of eliminated the one advantage we had."

Enfield said that Oraby doesn't usually show that much emotion.

"Usually he doesn't flinch," Enfield said. "He shows no emotion when he gets fouled and there's no call, but he got frustrated tonight because he thought he was getting hit and nothing was called."

Maybe it is the sign of a young coach, but Enfield took little of the blame for the loss and seemed to give most of it to his players.

"Players win games," he said. "Coaches come up with game plans, but players have to perform and ours have to show better leadership."

He was most unhappy with the play of his guards, Pe'Shon Howard, Julian Jacobs and Byron Wesley, even though Wesley was seven for 12 from the field.

Wesley, USC's junior guard who is from Rancho Cucamonga and who played his fifth game against UCLA on Sunday, scored 21 points to lead the Trojans. He's now 1-4 against USC's biggest rival and said that even though this is the worst of the four losses, he would watch tape of the game.

"This was not acceptable," Wesley said. "And, sadly, yes, this is my worst experience against them. All I can tell my teammates is to have a short-term memory, but I always like to watch film no matter what and see what happened one more time."

Wesley said he was most disappointed in the first five minutes, when USC was already behind, 11-2.

"We just dug ourselves into too big a hole," Wesley said. "Any time you lose it is tough, but when you lose by almost 40 to your rivals there are no positives."

UCLA's sophomore Anderson had his seventh double-double of the season and 15th of his career by equaling his career scoring high of 23 points and his season rebound high with 12. ... UCLA Coach Steve Alford is now 3-0 against USC. Enfield is 0-1 against the Bruins.