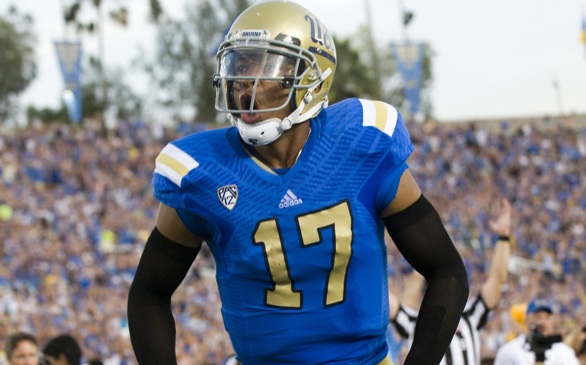 Brett Hundley has decided to return to UCLA for his junior season of football.

The quarterback was eligible to declare for the NFL draft, but his return to the Bruins makes UCLA a front-runner in next season's Pac-12 Conference championship race.

The Times received confirmation of his decision from a person with knowledge of the situation who was not authorized to speak publicly about the matter. A news conference has been scheduled for 9 a.m. Monday to announce the decision.

There are team and individual goals that can be attained.

UCLA has not won the Pac-12 title since 1998 and not played in the Rose Bowl since the 1999 game, a 15-season drought that is the longest for the Bruins since the conference champion has automatically qualified for the game. The Bruins' only national championship was won in 1954. Next season, the Rose Bowl becomes a semifinal game in the inaugural College Football Playoff, which replaces the Bowl Championship Series.

His 53 career touchdowns passes are third behind McNown, who has 68, and Olson, who has 67.

Hundley had 3,071 yards passing and threw 24 touchdown passes in leading UCLA to a 10-3 record this season. He was also the team’s leading rusher with 748 yards.

He was the first quarterback to lead the Bruins in rushing since Larry Zeno, who gained 325 yards in 1964.