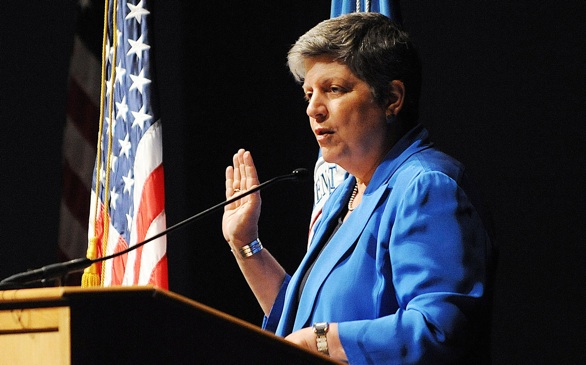 OAKLAND -- In the first three months as the UC system's president, former Homeland Security Secretary Janet Napolitano quickly has taken up long-standing issues, getting the regents to temporarily freeze tuition and urging labor leaders to return to negotiations where disputes had dragged on.

Napolitano spoke in her office last month, cautiously answering questions about tuition, labor relations, community college transfers, Sacramento politics, Cal football's low graduation rate, and the protesters who dog her at public appearances to highlight the illegal immigrant deportations that took place during her time as the Homeland Security chief. The questions and answers that follow were edited for brevity and clarity.

Q: One of your first proposals was to make tuition rates more predictable. What might that look like?

A: I really don't want to say right now because the task force is looking at different models, and the minute I say, "For example," then that becomes "Well, the president has proposed," and it's like, no, no, it's being looked at. In my view, these are public universities and they should be as affordable as possible, and that means we need to be looking at tuition and financial aid and how that mix works and what can we legitimately expect from the federal government and the state government. (This spring, the task force is scheduled to come back to Napolitano with recommendations.)

Q: At the last UC regents meeting, Gov. Jerry Brown said UC had slim chances of securing additional state funding, with all of the competing needs in Sacramento. What did you make of that?

A: I can appreciate what the governor was saying. I used to be a governor. And what happens at budget time is everybody comes in like this (hands outstretched) with, "I need, I need, I need." You have to make really tough choices. ... I want to make sure that he is confident that what we ask for will be put to good use, will be well-spent, and that it's an investment for the long-term.

Q: Were you surprised by the low graduation rates for some student-athletes at Cal? (UC Berkeley's football team had the lowest graduation rate of any major program in the NCAA.)

A: Yes, and I wasn't happy about it. No one should be happy about it. Athletics are within the province of each campus, but I think everybody understands that I feel -- and we all feel -- that that's just unacceptable. I've had a lot of pleasant surprises as the president. That one was not so pleasant.

Q: One of your initiatives is to make it simpler for community college students to transfer to UC. What are your impressions of that system?

A: Close to 30 percent of our students are transfer students, so in terms of the numbers, they're pretty good. What we are looking at is how do we make sure we have adequate outreach to all the community colleges, that we streamline the application process ... and that we're in close alignment with the community college system. We've got to work together to make sure we've got this thing nailed as being very straightforward -- clean, I would use.

Q: I've read that you were surprised by the long-standing tension between UC and some labor groups. (Health care and service workers represented by American Federation of State County and Municipal Employees 3299 held a two-day strike in May and an unfair labor practice strike in November. When Napolitano arrived, UC was at an impasse with health care technical and research employees [CWA-UPTE] after two years of bargaining). What have you done to change that?

A: We've finalized several major agreements -- with the nurses, with UPTE, and we have a date set to sit down again with AFSCME in the beginning of '14. To me, collective bargaining negotiations that go on for months and years just create an unhelpful tension. We're all in this together. It's a big institution; we have a lot of things to deal with, and we ought to do our best to get stability between ourselves and our represented employees. ... I met with the leaders of the major unions early on and said that I wanted to get our teams back to the table -- not just to have meetings, but to get to real agreements.

Q: You've been back to Washington. What points are you trying to press with people there in terms of higher education policy or funding?

A: My initial visit was more of an introductory visit in my new role to say, "This is how I'm looking at things. What are you seeing?" I was asked what I thought about the proposed presidential rating system of colleges and universities, and I expressed some skepticism as to whether that would really accomplish what I think they're seeking to accomplish, so I think we've opened up that dialogue a little bit.

Q: Did you expect you would have protesters at your public appearances?

A: I heard that it would happen. Nobody knew what the topic would be, per se, but that there would be protesters, that it's part of the culture of the place. So I guess I'm getting used to it.

Q: You were saying last month that this was a point of inflection for higher education. What exactly did you mean by that?

A: I think it's time to reinvigorate the partnership between the state and higher ed and the federal government and higher ed. ... My predecessor had to make some really tough calls because the amount of aid was cut so substantially. But now it's leveled off. We have a certain stability in our budget, and we need to be thinking about "What should we be doing to ensure the University of California meets its mission over the next decades?"