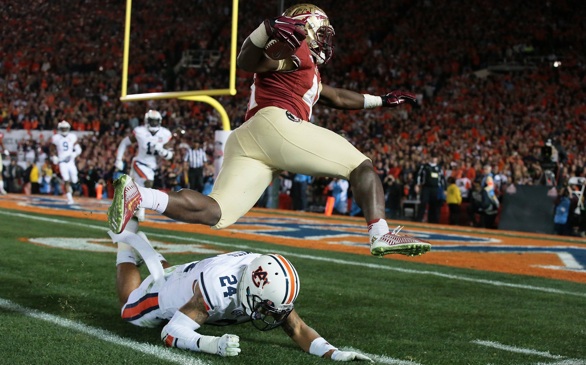 Destiny dropped the darling it brought to the last-ever BCS championship dance and switched partners. Auburn made it to the title game Monday night at the Rose Bowl thanks to two miracle plays, but this time, it was the Tigers who were stunned by a dramatic finish that allowed the No. 1 Seminoles to pull out a 34-31 victory with two touchdowns in the final 4:31.

Just as it had all season, coach Gus Malzahn's team rallied 75 yards to score on a 37-yard run by Tre Mason for a 31-27 lead with just 1:19 left. It would have been the third miracle comeback of the season for the Tigers, but they couldn't hold off Heisman Trophy quarterback Jameis Winston, who drove the 'Noles 80 yards in just 58 seconds to score on a 2-yard pass to Kelvin Benjamin with 13 seconds left.

The winning TD was set up by a third-and-goal incompletion on which Auburn defensive back Chris Davis was called for interference against Rashad Greene. Davis was the instant legend who returned a missed field goal 109 yards on the last play to beat Alabama.

Describing the Seminoles' reaction to the first pressure they faced all season, Winston said, "When they gave us all they got, we came out victorious."

Florida State's win snapped a streak of seven straight victories by the SEC in the title game. Winston was sacked four times and struggled for three quarters, but he came up big at the end, completing 20 of 35 passes for 237 yards and two touchdowns.

"It was the best football game he played all year," FSU coach Jimbo Fisher said of his redshirt freshman QB. "For three quarters, he was up and down, but when you can say, 'It's not my night,' and you can take your team down the field and lead it to victory, that's what a great player is to me."

Mason led Auburn with 195 yards rushing on 34 carries, and quarterback Nick Marshall completed 14-for-27 for 217 yards but threw a fourth-quarter interception that led to an 11-yard TD pass from Winston to Chad Abram that cut FSU's deficit to 21-20.

Auburn arrived in the title game calling itself a team of destiny after two miracle plays beat Georgia and Alabama -- a 73-yard TD in the final minute against Georgia and Davis' "Kick Six" return against Alabama.

"It was the biggest turnaround in the history of college football," Malzahn said of a team that was 3-9 last season and 0-8 in the SEC. "We were on the brink of making it a magical season."

The Tigers took a 21-3 lead in the second quarter as Marshall threw touchdown passes of 12 yards to Mason and 50 yards to Melvin Ray and ran for a 4-yard TD himself. Auburn's defense did a good job of pressuring Winston, who completed only 6 of 15 first-half passes for 62 yards.

"He started holding the ball and second-guessing his decisions," said Tigers defensive end Dee Ford, who sacked Winston twice. "He's a freshman. I saw very early he was hesitant."

Winston somehow found his composure when he had to have it with 1:11 left in the season. "I was uncomfortable," Winston admitted, "but it wasn't because of Auburn. It was me wanting to do too much. If I was rattled, I don't think we would have won the game. I never heard of a young quarterback to be rattled and then coming back with the game-winning drive."