Zoë Bell Takes on Role of Producer, Actress in Raze 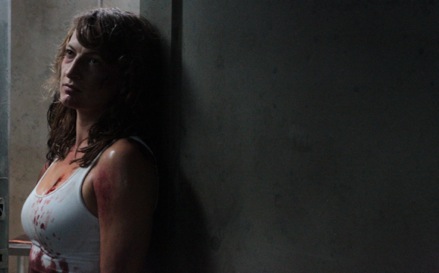 What happens when women are pushed to their breaking point? Zoë Bell shows us in Raze.
(Credit: IFC)

Zoë Bell is no stranger to brawls. You've seen her fight and kick serious butt as the stunt double for Lucy Lawless in "Xena: Warrior Princess" and Uma Thurman in Quentin Tarantino's Kill Bill Volume One and Two.

Now, this New Zealand stuntwoman (who has experience in gymnastics and martial arts) has added two more skills to her resume with new her film, Raze: producer and leading actress.

Bell plays Sabrina, an ex-POW who has been abducted along with 50 other women to fight till the death in an undisclosed underground location in order to save themselves and their loved ones. With no weapons of any kind, the women are forced to face each other with only their bodies to protect themselves. Head smashing, eye poking, blows to face and kicks to the stomach -- the fight scenes in Raze are brutal and bloody.

In a recent phone interview with Campus Circle, Bell explained all about how she got involved in the film and what she plans to do next.

Campus Circle: What attracted you to the script as a producer, and what attracted you to it as a stuntwoman and actress?
Zoe Bell: By the time I came on board, it was only a short [film] with the intention of it maybe becoming something bigger. What attracted me to the project were initially the guys that were involved: Kenny Gage, Andrew Pagana and Josh Waller. Josh is a director and longtime friend of mine. Just the energy and the concept of where they wanted to go, what they wanted to achieve, that appealed to me. And then the offer of coming on board as a producer and being collaboratively involved -- that was the final straw. I was like, “And I’m in.”

CC: You play Sabrina - a tough, hard as nails yet compassionate woman. In what ways are you similar to your character?
ZB: ...We have a similar accent; we’re both from New Zealand (laughs). But aside from that, I think the life that I created for her is vastly different from the life of mine, [but] who knows? If she had my life, she might be very similar to me…

CC: As a stuntwoman, you were physically prepared for those incredible fight scenes, but was there one scene in particular that was really difficult or draining?
ZB: The first fight for me was notable in terms of performance for a couple of reasons. For one, it was before we considered it being a feature, so we had more time on that fight than any of the others. Also, it was pretty fundamental in finding our Sabrina and in finding what needed to be confined underground…

In that fight, for me as Sabrina, that emotional place that she went to was like, “Oh sh@$. That’s what this movie is about.” Fighting opposite Rachel [Nichols] and the performance that she brought and the balls she was throwing to me was such a cool experience. To have that kind of emotion and the physical fight stuff (that’s so familiar to me) meet in the middle -- it was a very powerful experience. I love to watch it now.

CC: It seems that you have the most experience with fight scenes and stunt work. Were you able to help or give tips to the other women in the cast when it came to performing those scenes?
ZB: Yeah, as much as I could. When we were fighting opposite, I definitely could and it’s sort of a natural state of being for me…

To be honest, it was sort of a give and take. I know I got so much from the actors on set…just watching talented people work is always such a treat, and so much can be learned from watching them.

CC: After a typical day of shooting, how would you unwind and rest?
ZB: I was on set a lot - I am addicted to being on set. By the time I leave to go home from Burbank, it’s usually close to 11…I was only home for about four or five hours. At the end of one night, I was sitting around with whoever was around and had a whiskey, just one whiskey (laughs). I find there’s nothing more depressing than leaving work, going straight to bed, getting up and going again, not having any "me" time. So, it was nice just sitting around, having 20 minutes being me and having my life…whiskey really just does the trick (laughs).

CC: Is there a message or lesson you hope audience members will walk away with after they watch this film?
ZB: Subconsciously, I truly believe women are super capable. They’re capable of love. They’re capable of vulnerability. Pushed to a point, women are capable of serious internal strength, and the reason why I came into making a film about showing that, I was interested in seeing it and being it…I didn’t make a movie with the intention of educating people or telling them how they should live life or how they should see life. It was just more of, “I’m really interested to see this happen.”

There was one guy that stayed to watch the whole movie and on his way out, he just started ranting! He was angry about how sexist it was and how he had a wife and a daughter, and how he was so offended…but it was so bizarre for me because I did not see it like that at all. There was another woman who stood up in the same audience and was so angry that guy thought that way and she was like, “I watched that movie, and I never felt so empowered!” Two different opinions of the same film just about caused a fight (laughs).

CC: So, what’s next for you? Is there going to be more producing? More acting? More stunt work and acting?
ZB: I can definitely see acting as sort of the prevailing direction at this point, and producing seems to be something I kind of take naturally to, and I really enjoy it. I have a couple of projects that are in the very, very, very early developmental stages.