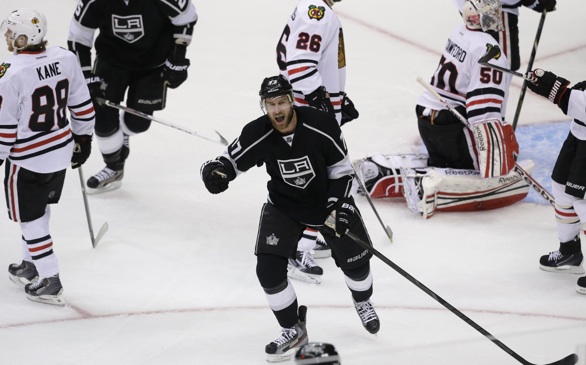 The Great Olympic Build-Up for the naming of Team Canada will conclude Tuesday morning when its management group announces the selections.

So if the lasting impression of Kings forward Jeff Carter was his two goals against Vancouver on Saturday, his campaign manager/coach managed to get in a few final words Monday.

"I coach Jeff, I want him to make it," Kings Coach Darryl Sutter said. "And I think he's deserving of it. That would be my assessment of it all.

Carter has a team-leading 15 goals in 33 games this season, missing 10 games because of a broken foot suffered in late October. Last season, he had 26 goals in the 48-game lockout-shortened season.

In 2010 when he was with the Philadelphia Flyers, Carter was selected as a reserve in case of an injury.

"There's not going to be right or wrong decisions," Sutter said. "They're going to be ones that they can justify it for your team and that's it. It's not good or bad."

Kings goalie Jonathan Quick passed his latest test, suffering no adverse effects from Saturday's win against Vancouver, which was his first start since suffering a groin injury on Nov. 12.

"Practices were tough," he said. "In some ways they're tougher than games and that's the point of it. It's to try to make the games seem as easy as they can by making your practices harder. I had a good feeling I wasn't going to have any soreness or anything uncomfortable.

"You wake up and just because you haven't played in a while, not feeling anything [bad] is obviously is what you're looking for."

He put in the necessary work, which eased his concerns.

"Going in, I felt really confident that I wasn't going to feel anything," Quick said. "We had done so much work and tested it so many different ways to make sure there was nothing lingering."

The Kings sent rookie goalie Martin Jones to their American Hockey League affiliate Sunday, which opened up a roster spot. Left wing Tanner Pearson, who appeared in six games with the Kings earlier this season, is expected back in Los Angeles on Tuesday.

Brown had no comment on Monday, but Sutter had plenty to say, almost all of it printable.

"Well good for Mike Gillis to say that," Sutter said. "…[Luongo] played a hell of a game. That goal, that shot was on a rebound that came right here. The player [Brown] was going to the net, shot it into the net, tried to go over Roberto Luongo.

"That's wonderful they would quote that. Quite honest, that's …. Don't get me going on it."