MOCA Meets Its Goal and Sets a New One 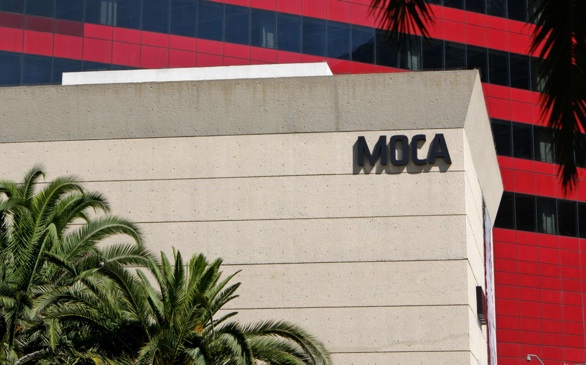 Leaders of L.A.'s Museum of Contemporary Art say a campaign launched less than 10 months ago to quintuple its endowment to $100 million has met its goal, prompting them to keep the campaign going with a new goal of $150 million.

They see the achievement as a turning point after five years of financial instability that has led to budget and staffing cuts, including a winnowing of the curatorial staff from eight to the current two through layoffs or resignations.

A written announcement listed 29 donations from individuals, couples or foundations, all but two of them from board members, their foundations or their families.The campaign also has elicited an unspecified number of anonymous gifts. MOCA provided no further details about the amounts.

Last spring, less than a month after launching the campaign, MOCA said it had received about $50 million in donations or pledges ranging from $1 million to $10 million, naming 19 board members without specifying how much each had given.

Museum leaders also said it's possible, but not certain, that MOCA facilities will be named in honor of the campaign's top donors.

"There's been this tremendous push by committed people who should commit and did commit," said Maria Bell, who, as co-chair of MOCA's board with David Johnson since 2009, has helped oversee the museum's recovery from near financial ruin after the fall 2008 meltdown of global investment markets.

Johnson said the campaign's success means that MOCA has "a sustainable financial future for the first time in its history."

Jeffrey Deitch, the former New York City art dealer who resigned as MOCA's director last summer, and the Marc and Eva Stern Foundation were the two donors on the updated list who aren't currently MOCA trustees.

Maria Seferian, MOCA's interim director, said the endowment campaign will give MOCA an immediate financial boost. She said MOCA will be able to count on investment returns from the endowment, which would generate at least $5 million a year for operating expenses.

But Seferian declined to provide information about the museum's budget for the current 2013-14 fiscal year. The previous year's $14.3-million budget had been its lowest since the late 1990s.

The money donated to an endowment is not supposed to be spent, but an endowment's investment earnings can be tapped. Nonprofit organizations typically plan on spending about 5% of their endowments' value each year.

Although lauded for the quality of its collection of post-World War II art and for a track record of ambitious and insightful exhibitions since its 1983 opening, MOCA has been seen as a problem child in the museum world, dating back to the 2000s when it ran a string of budget deficits and improperly dipped into its endowment's principal.

MOCA still has major decisions to make, starting with hiring a director who'll be in charge of rebuilding the staff. Beginning last summer, a 14-member search committee generated an initial list of 50 names who were "international" in scope and "primarily museum professionals," Seferian said.

It also took into account the wishes of MOCA's staff, which she said "prepared its own statement of qualities they were looking for" in a new director to replace Deitch, who resigned after a turbulent three-year tenure.

The MOCA leaders declined to say whether finalists have been identified or negotiations begun with a favored candidate. "From the position of strength we're in, people understand this is an incredible opportunity," Seferian said.

The new director will work in tandem with a new pair of board chairs, Maurice Marciano, who joined the MOCA board in 2012, and Lilly Tartikoff Karatz, a trustee since 2009. Normally the new co-chairs would have taken office last summer, but Bell and Johnson were asked to stay on to provide continuity during the endowment campaign's first phase and as the search for Deitch's successor was being launched.

The new co-chairs will take office during a Jan. 14 board meeting. Johnson and Bell will continue as board members.

Marciano will be in the unusual position of co-chairing the board of one L.A. museum while working to launch another one a few miles away: Last year the foundation led by Maurice and Paul Marciano, co-founders of the Guess Inc. apparel company, bought the Scottish Rite Masonic Temple on Wilshire Boulevard, and a foundation representative said they planned to renovate it as a home and exhibition space for their own collection of contemporary art.

Marciano was said to be out of the country and not available to be interviewed.

Bell said chairing MOCA's board while cultivating a separate exhibition space for the same genre of art posed no conflict.

"There are many people on art museum boards across America who have their own foundations that exhibit art," she said. Bell said "Maurice is very much engaged in MOCA," and she'd never heard any concerns over potential divided loyalties on Marciano's part.

Eugenio Lopez, the vice chair of MOCA's board and co-chair of the endowment campaign, also operates his own contemporary art museum, but it's in Mexico City.

Seferian noted that because the Marciano collection's venue will be funded by a private foundation, it won't compete with MOCA for potential donors.

MOCA had imposed a year-end deadline for its campaign to lift the endowment to $100 million, but there's no time limit for reaching the new goal of $150 million.

In the newly concluded first phase, donors were urged to pay their pledges in full as soon as the campaign reached the $100-million goal, Seferian said, and funds not received already are expected to come in shortly.

She said that in cases where donors wanted to pay pledges over several years — a common arrangement for big contributions — they agreed to donate an additional 5% of the pledge each year to help with MOCA's operating expenses while the pledge remains unpaid. That means MOCA will reap about the same benefit from the as-yet unpaid pledges as it would expect had the money been given as an immediate lump sum.

A year ago, doubts had begun to surface as to whether the MOCA board was committed to funding the museum and whether it would continue as a stand-alone operation. In December 2012, USC confirmed that it was in discussions with MOCA over an unspecified partnership.

Last March, Michael Govan, director of the Los Angeles County Museum of Art, sent the MOCA board co-chairs a proposal that would have brought the downtown museum under LACMA's umbrella, with LACMA raising $100 million in connection with the merger.

But by the end of March, the MOCA board announced that it was committed to keeping the museum independent and embarked on the endowment campaign.

"This board came together and unanimously decided it's very important that MOCA remain a real force," Johnson said.

For the record, Jan. 7, 7:53 a.m.: An earlier version of this post incorrectly used `Mario' instead of `Maurice' in one reference to Maurice Marciano.