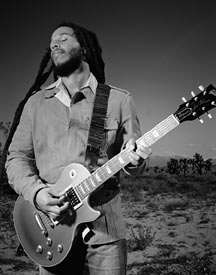 It’s often difficult for children of famous parents to emerge as individual artists. Instead, they may be forever labeled with a defining characteristic such as "Bob Marley’s son," rather than the "the one-and-only Ziggy Marley."

Contrary to popular belief, Ziggy Marley created a name for himself that is authentic, raw and downright inspirational. His current album, Dragonfly, and national tour, "Bob Marley: Roots, Rock, Reggae Festival," are both projects with valuable messages that hold life altering lessons for us all.

Dragonfly, which Marley describes as "more mellow" compared to the high tempo work he previously recorded with his brothers, is Marley’s first solo album. At the album’s foreground are his crucial lyrics that discuss his views on life, particularly his opinion on the pains of religion and the disservice it can do to humanity.

Yet Marley describes himself as a spiritual person. But what exactly does Marley mean when he says he’s spiritual, but not religious? He replies by admitting that he definitely believes in God and that the "first law of the universe is to love," yet he also explains that there is a human tendency to "take the concept of God and add uncertainty and the corruptness of the human ego into it."

In his song "In The Name of God," Marley speaks about his views on religion when he eloquently rhymes, "What divides us is an illusion, made up by men in their confusion." Marley says his hope is that his lyrics will make people "think, think, think and open their eyes in order to not just be like puppets." As a result, his songs are a culmination of words and background chords of puffing, chill beats that will surely inspire the diligent work of his listeners’ incombustible think tanks.

When asked about his social obligation as an artist, Marley could not reply more truthfully. He says in his soulful Jamaican accent, "To love." Marley links his artistic work of making music to his personal life and explains that they are in fact one entity. "As a human being I am obligated to what I believe," he says, "which is God, love and the brotherhood and sisterhood of society."

Although Marley is not preaching and, ultimately, is simply expressing his own personal beliefs, it’s tempting to contemplate the reduction in crime that is bound to occur if we’d all just listen. Ziggy Marley has undoubtedly become successful in continuing the legacy of the peaceful teachings of his late father, icon Bob Marley.

The "Bob Marley: Roots, Rock, Reggae Festival" is an official tribute to Marley’s father with headlining performances by Ziggy and his brothers Stephen, Julian, Damian and Ky-Mani. The tour also features the likes of Toots and the Maytals, Slightly Stoopid, Nappy Roots, hip-hop legend Common, Looner and Stone Love with MC and DJ G-Fuss.

Marley further hails the event as a celebration of spiritual freedom, assuring it will be good times all around. He warmly invites people to attend the festival by saying: "Come and uplift yourself. It is very important in these times to get together and enjoy life." Big ups to you Ziggy for doin’ your thing, livin’ the dream and motivating us to do the same.

Dragonfly is currently available. Ziggy Marley will be playing the "Bob Marley: Roots, Rock, Reggae Festival" on Friday, Aug. 27 at the Greek Theatre. For more information, visit ziggymarley.com and rootsrockreggae.com.