The Crystal Method Slows Down, But Not for Long 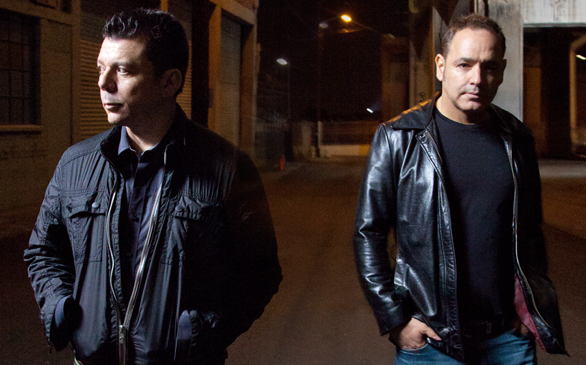 When Scott Kirkland (L) got sick, he and bandmate Ken Jordan (R) had to postpone an album.
(Credit: Facebook.com/thecrystalmethod)

When doctors first detected a posterior fossa arachnoid cyst in the brain of The Crystal Method’s Scott Kirkland last spring, there were plenty of people close to him who were concerned.

“I was kind of freaked out,” his longtime partner-in-crime Ken Jordan recalled when he first learned of the news.

Jordan, after all, remembered when his wife’s father was diagnosed with brain cancer, and he couldn’t imagine seeing his bandmate go through the same thing.

Fortunately for Kirkland, the cyst that was the “size of a Twinkie” was benign, so with a full recovery from surgery, he was expected to be back in the studio to finish the electronic duo’s fifth full-length record shortly thereafter.

But not long after the initial procedure, Kirkland’s health turned for the worse. Contracting a spinal fluid infection, he spent the next month in intensive care.

The Crystal Method quickly canceled work on the album, its upcoming tour and any other plans it may have had in the coming months.

“We just said everything’s canceled,” Jordan said. “We decided that there would be no schedule until he’s better.”

The lumbar spinal drain — more commonly known as a spinal tap — that Kirkland would subsequently have triggered a level of pain he had never experienced before, but it was the time he missed in the studio and out on the road that hurt the most.

“I can’t tell you how frustrating it is for me that my health has made us postpone the release of the new record and cancel a summer full of amazing shows,” Kirkland said when he originally announced the news back in May.

The Jan. 16 homecoming show, after all, should be a special one for the duo, which will be joined on stage by a full live band that includes former Guns N’ Roses guitarist Richard Fortus, former Nine Inch Nails bassist Danny Lohner and former Primus drummer Bryan "Brain" Mantia. You’d be hard-pressed to find a much better backing band in rock than that.

“There’s going to be some more surprise guests,” Jordan assured me during our interview. “It should be a lot of fun.”

In the meantime, Jordan is just excited to have his bandmate back alongside him. “He seems to have a new whole appreciation for life and being able to do what he loves for a living,” he said. “He’s been back better than he’s ever been before.”

And when it comes to the Los Angeles-based act’s latest material, it shows.

The 11-track album, which features 2011 “The Voice” runner-up Dia Frampton on “Over It” and country sensation LeAnn Rimes on “Grace,” takes a page out of the band’s earlier work that has earned it multiple television, movie and video game spots over the years.

“We just let collaborations naturally occur,” Jordan said. “If you enjoy working with someone, the music always comes out a lot better.”

While opening track “Emulator” and the spacey “Jupiter Shift” offer some old-school big beat flavor that The Crystal Method made its name on in the early '90s, cuts like “Sling the Decks” and “Dosimeter” tap into some of today’s more ubiquitous EDM genres such as electro house and dubstep. Jordan and Kirkland, in the meantime, pay homage to their L.A. roots on “110 to the 101,” as high-pitched synths carry the melody over a funked-out backbeat.

When it came to the video for “Over It,” The Crystal Method didn’t want to take the easy way out, so it went in a different direction by staging a “Top Chef”-style baking competition that stars Frampton and includes cameo appearances from both Jordan and Kirkland.

The Las Vegas natives have certainly learned a lot about collaborating with singers since working with Motown legend Martha Reeves in 2011 for the RE:GENERATION Music Project, which also saw tracks from DJ Premier, Mark Ronson, Skrillex and Pretty Lights.

Yet, after more than 20 years in the business, Jordan and Kirkland are also proving that they’re more than capable of adapting to the ever-changing landscape of electronic music.

"It's been two decades since this started, and electronic music has enjoyed a huge resurgence," Jordan said. "We wanted to reintroduce ourselves to the world.”

That doesn’t mean the two beatmakers haven’t been busy, though. Between finishing its new album and creating the music every week for J.J. Abrams’ sci-fi drama “Almost Human” on FOX, Jordan and Kirkland barely have time to sleep these days.

“It took us two or three years to come up with 10 or 12 songs for an album, and now we’re doing like 20-30 songs a week,” explained Jordan, who in the past also produced the theme music for FOX’s “Bones” with Kirkland. “This is unlike any challenge we’ve ever faced.”

Still, if there’s one band that can handle those kinds of demands, it’s The Crystal Method.