There's No Love Lost Between UCLA and Arizona in Men's Basketball 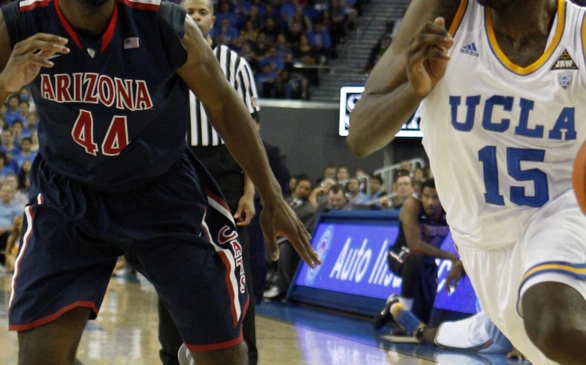 There remains an eerie consistency to UCLA's basketball rivalry with Arizona.

Said Jordan Adams, who leads the Bruins in scoring this season: "Their fans don't like us much and we don't like them."

Some things never change, and hard feelings when UCLA and Arizona play are one of them.

The Bruins and Wildcats have clawed at each other for 20 years. Conference titles, be it as part of the Pac-10 or Pac-12, have hung in the balance. National attention often fell on Tucson and Westwood as the college basketball powers in the West.

Arizona is powerful again, bringing a 15-0 record and No. 1 ranking into Pauley Pavilion on Thursday night. UCLA is 12-2 and was nationally ranked until a loss at Missouri and one against Duke at Madison Square Garden.

The Bruins have a 10-19 record against No. 1 teams, with the last victory over a top-ranked team coming against Arizona in 2003.

Yes, so many years later, that competitive spirit remains.

"It was always a game I had circled on the calendar," O'Bannon said. "I knew when we were playing. I knew who I was guarding."

"We have hopes and aspirations," UCLA guard Norman Powell said. "Beating them would put us where we want to be."

UCLA has that as motivation. Arizona is seeking revenge, having lost three times to UCLA last season, including 84-73 in Tucson at McKale Center, where Bruins guard Kyle Anderson tried to high-five unhappy Arizona students as he skipped to the locker room.

"They are going to come into this game with a chip on their shoulders," UCLA center Tony Parker said.

Maybe even a cinder block. Added incentive: This will be the only time these teams meet during the regular season.

"They are ranked No. 1 and have everything going for them," Adams said. "In the back of their minds they know we beat them three times last year. They are going to remember that."

There are rivalries that are issued with the uniform. UCLA has USC. Arizona has Arizona State. Those are about owning local real estate.

UCLA and Arizona has been an interstate feud, though it still involves bragging rights.

"When I was at Arizona, UCLA had Baron Davis and Jason Kapono, guys I had played against, and even with, in AAU ball," former Wildcats star Luke Walton said. "You're playing against guys you literally have been playing against for 10 years."

The games don't ebb and flow so much as they simmer and boil.

"Coming to Arizona, I recognized that UCLA has a huge stick in the Pac-12, on the West Coast and in college basketball. This will always be a game of great meaning."

In a Pac-12 tournament semifinal in March, Arizona led UCLA, 56-54, with four minutes left. The Wildcats' Mark Lyons was called for double dribble, though replays showed a UCLA player had touched the ball. Miller was called for a technical foul and UCLA ended up winning, 66-64.

It was just another madcap UCLA-Arizona moment.

"The games always seem to come down to the last buzzer and they are always intense," O'Bannon said.

O'Bannon was a freshman when that fuse was lighted.

Especially painful for UCLA fans was Arizona's victory at Pauley Pavilion in 1991. The Bruins had a 77-76 lead with 30 seconds left, but the Wildcats scored six points in four seconds and won, 82-77.

Then, a turn: A year later, UCLA's Darrick Martin made a last-second shot to beat Arizona at Pauley Pavilion, and late in the season the Bruins clinched the conference title by ending the Wildcats' 71-game home winning streak.

"We went there with that intent," guard Tyus Edney said. "It made the victory sweeter. The playing field seemed to even out.

"The feeling when preparing to play Arizona was like we were preparing for an NCAA tournament game."